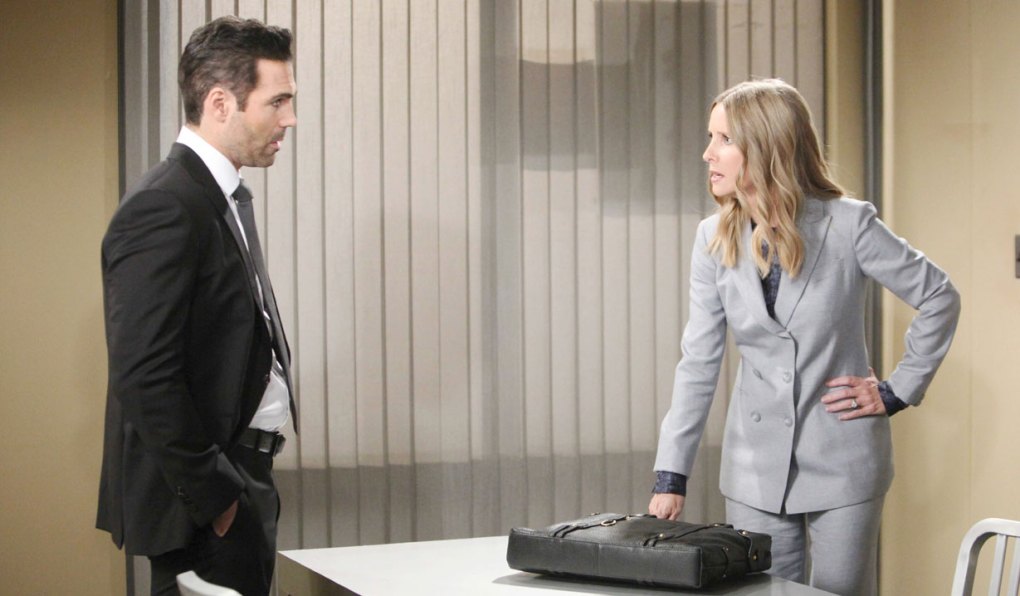 In the newest Soaps.com Young and the Restless spoilers, the twists and turns continue in Christine’s case against Nikki, Sharon, and Victoria as Phyllis takes the stand and Brittany spots an opportunity to help her client. Also, the bid to reclaim Jabot will cause tension with Jack and Kerry. Please visit this page every day to see spoilers from the day-ahead Y&R recaps.

In the newest Deconstructing Y&R, there’s drama ahead with a Jabot battle looming, and Summer and Mia scheming.

Young and the Restless spoilers for Thursday February 28:

In today's Y&R recap, the trial begins for Nikki, Victoria and Sharon and Rey decides not to arrest Mia, while Kyle appeals to Arturo and is able to visit Lola.

The Newmans plan how they'll defend themselves.

Young and the Restless spoilers for Friday March 1:

In today’s Y&R recap, Summer gets tested as a donor, and Mariah takes the stand.

A sacrifice is made by Devon.

Y&R spoilers for the week of March 4:

In today’s Y&R recap, Christine twists Phyllis’ words on the stand, and Summer gets an important call.

Jack stages a takeover at Jabot.

Just in: Soap opera alums in the news feature new movies, stage appearances and a sad report of one actor suffering a stroke.

In today’s Y&R recap, Kyle offers to marry Summer, Michael tries to make a deal with Christine, and Tessa gets an unsettling call.

Michael hopes to cut a deal.

In the latest casting news, Y&R is casting poker players.

Vote in Soaps.com's Y&R Poll: Jabot coup, to let us know if you think Jack and Billy will be successful in ousting Phyllis.

Christine gets a big win in court.

Summer believes she'll get what she wants.

Go behind the scenes as Y&R set decorator talks Tessa's teddy bear and what she gave Eileen Davidson when she left the show.

Rey is on the spot.

Kerry's loyalty is tested by Jack.

Former Young and the Restless alum Max Shippee in Becoming a Hero.

In today’s Y&R recap, Victoria delivers emotional testimony, and Rey makes a decision regarding his marriage.

Nick and Billy team up.

Victoria is called to the stand.

In recent casting news, Thad Luckinbill returns to Y&R in a shocking development.

After being tested as a possible liver donor for Lola, Summer proves to be a match.

Summer says, “Lola gets a liver and I get to be the center of attention.” Kyle says, “I’ll do whatever it takes to get you to do this. Anything. Name it.”

Summer agrees to go through with the surgery, which scares her a little bit, for a price.

Kerry tells Jack, “Phyllis isn’t just my boss, Jack, she’s my friend, and you’re asking me to betray her.”

Michael tells Nikki and Victoria he’s never had clients lie to him as much as them. They not only sabotaged him, they sabotaged themselves.

Phyllis looks out for her own interests.

Victoria stands up for herself.

Michael has an uphill battle ahead.

Sharon feels guilty knowing it was her admission to Rey that gave Christine ammunition against the women. While discussing this with her lawyer, Brittany learns that Sharon's confession was made after the married man declared his love for her, and that he did not read Sharon her Miranda rights immediately. Brittany feels this could be the break they need to keep Sharon out of jail, even though Rey could lose his job. On the stand, Rey admits he told Sharon he loved her, which leaves Mia horrified.

Nikki, Victoria, and Sharon wait to be sentenced.

Devon wants to find out what Ana's hiding.