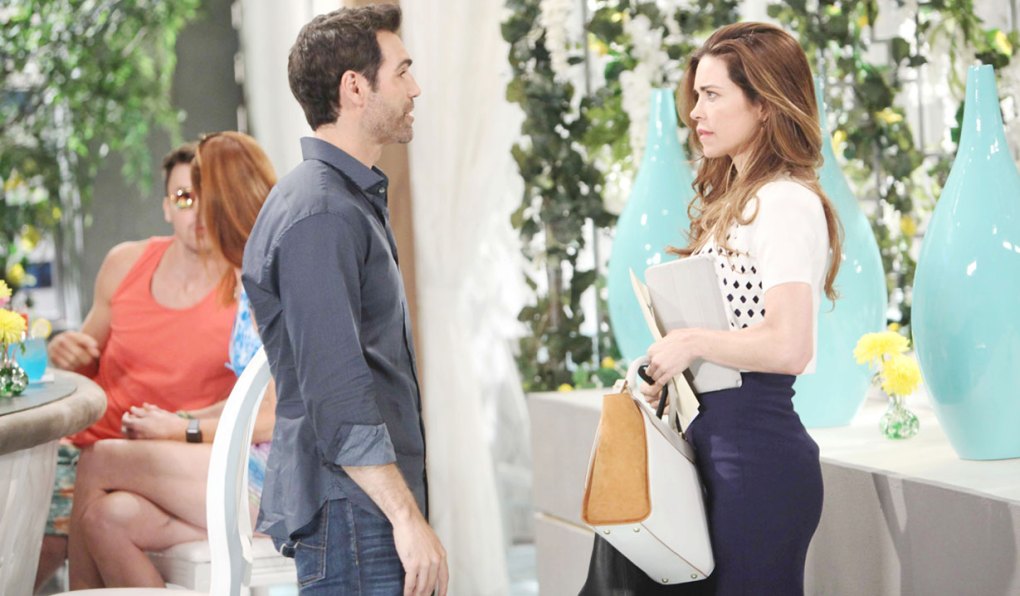 The latest Soaps.com Young and the Restless spoilers have more truths coming to light in the situation with Billy and Phyllis, who will take Ashley and Kyle off guard with their latest move. Meanwhile, Victoria’s stress begins to cause problems. Please visit this page daily for new spoilers from the day-ahead episodes of Y&R.

Young and Restless spoilers for the week of August 27:

In next week’s Y&R Spoiler Video: Rey confesses he’s in town because of JT, Phyllis wants answers from Billy, and Kyle suggests a plan to Ashley.

In this week’s Spoiler Digest, custody battles and bloody weddings, we have new spoilers for all four soaps including Bold and the Beautiful, Days of our Lives, General Hospital and Young and the Restless.

In the weekly Y&R Spoiler Video: Victoria is headed for a breakdown as Rey investigates JT’s dissapearance.

In today’s Y&R recap, Lily’s terrified she won’t survive prison, and Phyllis agrees to a move.

Lily has something to confess.

Just in! Christel Khalil switches from contract to recurring as Lily Winters Ashby.

In today’s Y&R recap, Ashley & Kyle plot to bring down Billy at Jabot, while Nikki vows to help Victoria.

Jack faces up to the truth.

Nikki has to cover for Victoria.

A Genoa City family gets bigger as Y&R casts Sasha Calle as Arturo and Rey’s sister.

In today’s Y&R recap, Victoria becomes suspicious of Rey, while Phyllis lets something slip with Sharon, and Abby appeals to Devon.

Behind-the-scenes news! Josh Griffith returns to Y&R as a producer.

In today’s Y&R recap, Kyle goes behind Ashley’s back to set up Billy, while Rey snags an intruder at Sharon’s place.

Just in… Alleged allegations against Y&R amid #Metoo movement.

Kyle puts a plan in motion.

Devon’s on his own.

Victoria is forced to do damage control.

Soaps.com was invited to the annual Daytime Programming Peer Group Celebration in Los Angeles. Check out B&B, Days & Y&R actor interviews on what they’re reading, their vacations, and more.

After trapping Summer on Jaboat with no phone reception, Phyllis and Billy move out of Summer’s place and into the Abbott mansion.

Phyllis asks Billy, “What’s going on with you and my daughter?”

Ashley says, “We have to wait and monitor the company’s finances and any direction Billy takes towards them.” Kyle replies, “Why wait for him to mess up? We can make it happen.”

Sharon asks Rey, “What exactly are you doing here in Genoa City?” Rey replies, “I’m here because of JT Hellstrom.”

Victoria throws herself into work as her stress mounts.

Rey is confronted by Abby.