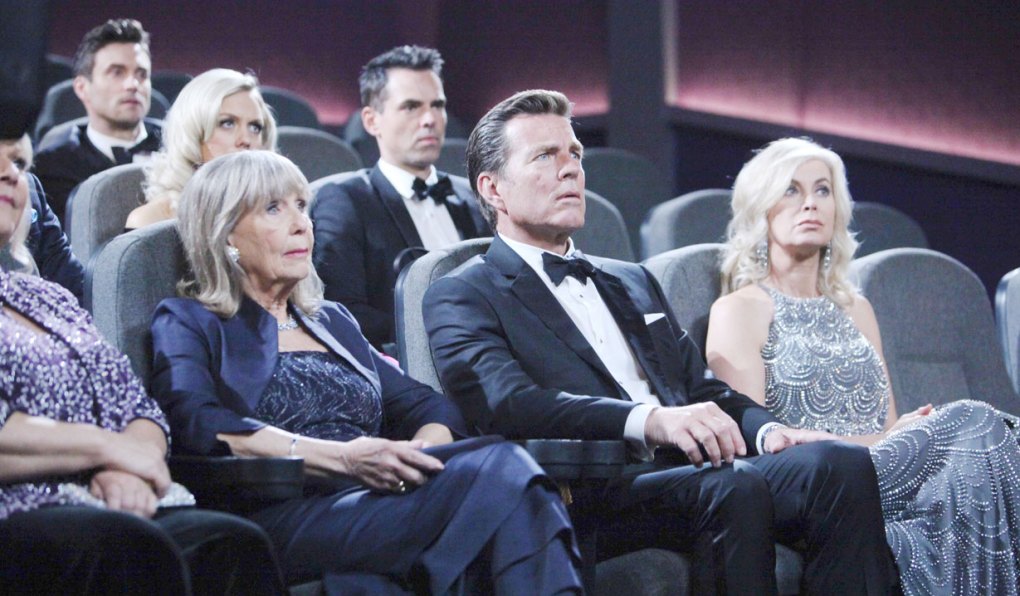 In the latest Soaps.com Young and the Restless spoilers a huge secret is revealed and rocks the Abbott family, while Sharon finds a way to briefly divert Nick’s attention away from finding JT, and Hilary comes clean with her ex. Check this page each day for teasers from the Canadian day-ahead episodes of Y&R.

In the newest Deconstructing Y&R, Kyle intrigues despite his stunning betrayal, and the secret-keeping continues.

Young and Restless spoilers for the week of May 7:

In this week’s Y&R promo, Jack has hope for Kyle as an Abbott, Kyle frets to Victor, Sharon and Nick heat things up, and Devon wants to be there for his child and Hilary.

In another Y&R promo, Jack learns Dina’s secret at the film screening.

In the latest Spoiler Digest, proposals, possession, and paranoia, we have new spoilers and May Sweeps for all four soaps including Bold and the Beautiful, Days of our Lives, General Hospital and Young and the Restless.

In Monday’s Y&R recap, Hilary confesses she’s not pregnant, Jack hopes for the future, Kyle is disappointed, and Sharon argues with Nick.

Kyle is tested by Victor. Hilary makes an admission to Devon.

May will bring a few Y&R casting details for three additional dayplayers who will be in scenes with two front burner characters.

View photos and videos of the soap actors, including Y&R’s Christian LeBlanc, on the red carpet as they made their way into the 2018 Daytime Emmy awards ceremony. Exciting news! Lauren Woodland returns to Y&R as Brittany and takes on an upcoming case in Genoa City.

Still celebrating! Camryn Grimes and Eileen Davidson appeared on The Talk along with their fellow 2018 Daytime Emmy winners to discuss their big night. Grimes spoke about her ‘state of shock’ and more.

Photos and videos from the ceremony! Y&R’s Jeff Branson congratulated 2018 Daytime Emmy winners along with other soap stars during the live 45th annual event.

In the latest Y&R recap, Jack lashes out at Dina and Cane stands up for Charlie.

Sticking around! Kelly Kruger’s staying at Y&R as Mackenzie and her return will be related to the investigation surrounding JT.

The Real Housewives of Beverly Hills’ star heads back to Genoa City when Erika Girardi returns to Y&R in order to set one major character up in a cool bachelor pad.

Jack opens up to Neil.

Hilary’s buttons are pushed by Abby.

Ashley discovers something that incriminates Kyle.

Check out Soaps.com’s red carpet photo gallery, which includes Y&R’s Gina Tognoni along with other soap actors who came together to celebrate at the 2018 Daytime Emmys nominee reception.

Nikki gets an upsetting reminder of the past.

Jack reaches out to Dina.

Kyle explains the significance of Dina’s video to Victor.

Devon wants to do right by Hilary.

At her appointment, Devon realizes Hilary’s not pregnant.

Sharon deflects from Nick’s interrogation by telling him how badly she wants him.

Kyle watches a preview of the footage with Abby and Jack.

Cane, Lily, Charlie, and Mattie are on hand for the Abbotts’ big night.

Victoria is cornered by Paul.

Sharon and Nick reach a decision.

Jack holds an envelope and tells Phyllis when he opens it everything could change.

Hilary and Devon dance together in the office.

Nick and Phyllis learn from the GCPD scanner that JT’s cellphone is back up and on the grid.

Jack’s dark side emerges after the secret that he is not John Abbott’s son is revealed.

Billy steps up for the Abbott family.

Nick and Sharon face a decision about the future.

Abby turns to Arturo in the wake of Jack’s secret coming out.