Deconstructing Y&R: Billy’s Spiral Has Made for Riveting Drama 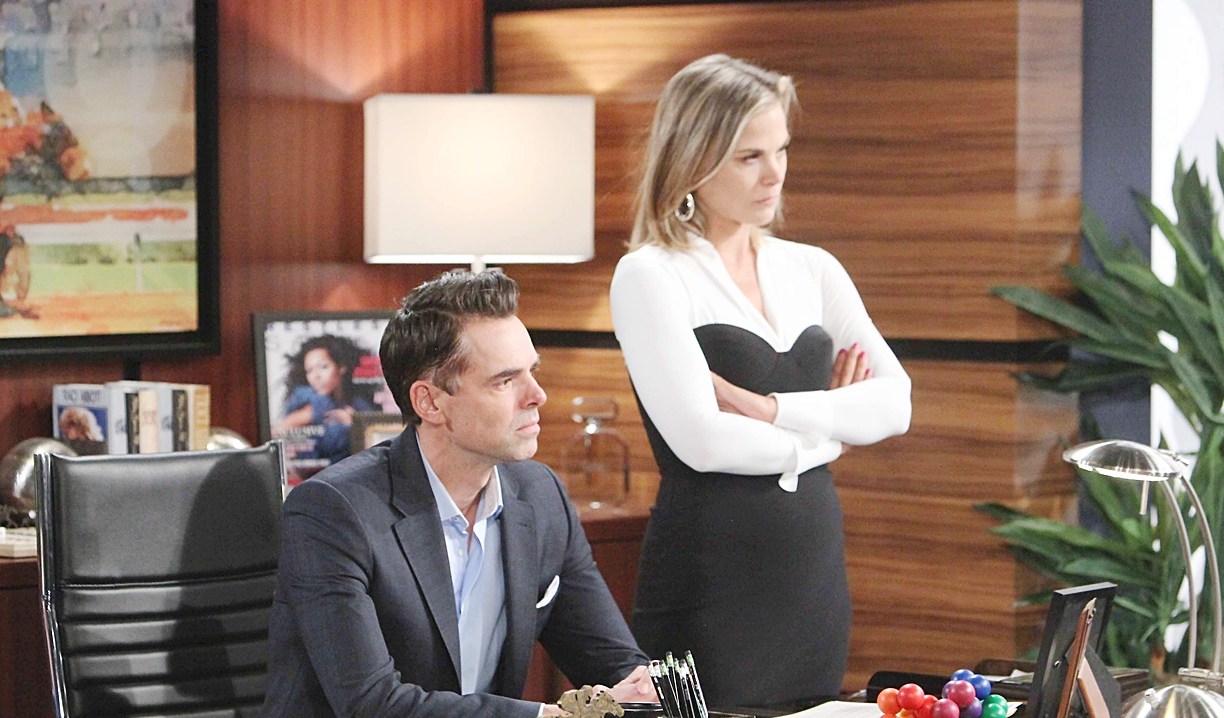 Each week I’m raving about amazing scenes and brilliant acting, and the storylines deliver in a big way on drama, yet move quickly and don’t look too closely at motivations or spend much time on exposition or anything below the surface. Billy and Jack are on intense personal journeys that have played out as a series of actions and reactions with the acting bringing the depth, Devon’s grief is being addressed by writing Hilary mentions into his dialogue, Summer’s behavior was conceived as a plot rather than evolving from her history, so her storyline has made no sense, and in the last Deconstructing Y&R, we loved the idea of Sharon graduating, but rather than a true celebration of her personal growth, it was used as a means to place her in a job with Rey at the police station. The drama has been amazing, but there’s still a need to slow down and delve deeper. Thoughts:

Billy’s intervention was an acting bonanza for fans: Billy’s perspiring, edgy demeanor, Traci’s heartfelt emotion, Jill’s concern masquerading as anger, Victoria’s pleading reminders, Jack’s brusque appeal, Ashley’s tearful plea, and Phyllis’ silent devastation after Billy stormed out. Interestingly, I don’t even recall much of what was said…it was the facial expressions and body language of the actors that were most powerful. The intervention scenes got plenty of fan reaction:

Omg these intervention scenes are so good! A++ to all the actors involved. #YR

intervention. So emotional touching deep heartbreaking. Background ? playing emotional when Jill spoke from her heart. ???? Mother and son. Jack confronted him before he lost everything. Jack stopped lying to yourself Billy. message simple direct powerful too. #YR

The intervention should have been two scenes max; the dialogue was too predictable #YR

I was thrilled to see Jill at the intervention, but was disappointed it was a one-off and she wasn’t around for any follow-up. Billy went out drinking afterward, which led to the scenes with Phyllis, Jack, and Summer at the Dive Bar (again brilliantly acted). The low point there was Jack mooning over Phyllis while she was agonizing over Billy – unappealing. After Billy’s agitated defiance at the intervention, his revelation to Phyllis at the police station that he had not only lost control of his gambling, but had stolen money from Jabot, was a relief of sorts. There were a thousand emotions zinging between those two when he came clean. (Spoiler alert for those pre-empted on Thursday) The intensity continued into the ensuing scenes in which Phyllis and Jack got together to help Billy, then just as things were turning around, Ashley made her move in the boardroom and boom…it all came crashing down around Billy. Again, riveting scenes with all of the power players in the boardroom and Ash dropping the bomb of the embezzlement amid the raised voices.

The scenes surrounding Mattie’s arrest were a bit of comic relief, as Lily’s eyes just about popped out when she heard the news. Very unexpected! It was nice to have Jill and Traci visit Lily as well, though it’s puzzling we’ve seen nothing of Lily’s father, Neil, interacting with his daughter – so weird.

Sharon’s bachelorette pre-party should have been a delicious mix of awkwardness, tension and comedy, but it all felt flat…Abby’s diva routine, Summer being a bitch for the sake of it, and Nick picking that time to tell Sharon he’d bought a house. Even Nikki’s heartfelt conversation with Sharon, which I wanted to love, was messed up – she hated Sharon because they were so much alike and now respects her, but still basically reserves the right to hate her when she feels like it? Huh? The bachelor party wasn’t much better; the only light-hearted moment was Arturo complaining about the lack of strippers and needling Nick that he was probably on his last chance with Sharon. I felt bad for Devon, who made a valiant attempt to participate – a realistic bit, I thought. Of course, the drama factor spiked when the parties joined together, and Nick and Sharon did battle with their consciences…and those who desperately wanted them to keep quiet. Loved the scenes with Phyllis going hard to push all the buttons that would talk Nick off the ledge, and Nikki and Victoria trapping Sharon in the elevator was definitely entertaining. But there was more – Mariah found out Nick cheated on Sharon and thus found herself in a dilemma about what to do with the information, if anything. I can’t wait to see what will go down at the wedding.

Another one bites the dust

The other big story of the week surrounded Jack’s latest DNA results, and as expected Jack was not related to Victor. Matt Miller’s return was nothing to write home about, and although there were a couple amusing scenes with Jack and Victor, the storyline has become a string of near-misses that lost the ability to shock the viewer about two potential fathers ago. There was barely a reaction from Jack, and it’s hard to feel invested when you’re not on a journey with the character.