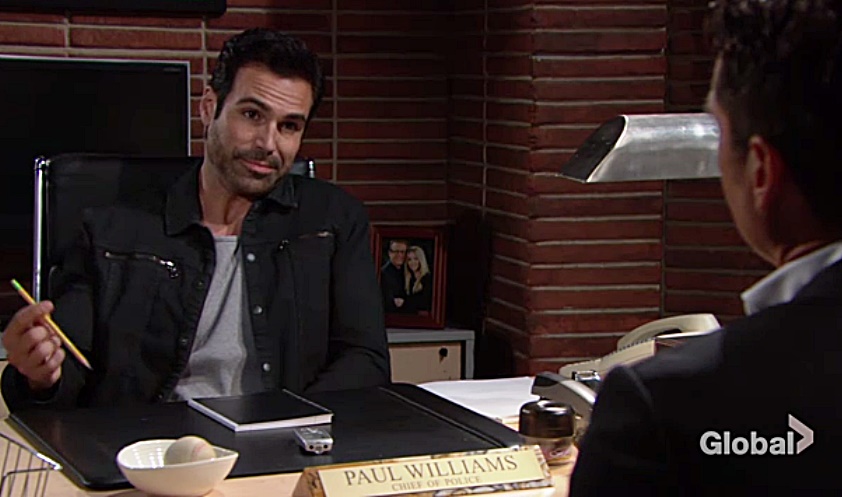 Similar to last week, while individual scenes still have the ability to draw me in to a large degree, there isn’t a storyline truly engaging me, and the overall ‘feel’ has shifted away from classic Y&R. Perhaps the sense of things being ‘off’ is in part related to recent casting changes, the latest being Doug Davidson’s exit as Paul after 40 years, as much as onscreen happenings. Thoughts:

In the last Deconstructing Y&R, fans were concerned the Rosales family would push out faves, but most were concerned about the Winters and Ashbys, and it wasn’t until Rey was sitting in Paul’s chair at the GCPD, that it became clear there could be other implications from the changes as well. Fans reacted:

Paul's office chair ain't even cold yet and #YR got Rey in that office like it's his birthright! After 40 years #DougDavidson will be missed!

Did you see today that Rey guy was using Paul's office to question Nick? Why couldn't he use generic police interrogation room? Yeah, the writing is on the wall. #YR

Rey shouldn’t be sitting behind Paul’s desk. Doug deserves more respect then what he’s getting. If the writers are going in another direction why not be respectful & give Paul a proper exit. I dont want to see him off the canvas but at least it’s respectful to a vet of 40yrs #yr

I understand them wanting new char, change is good, they want to go in a new direction but leaving the vets out, who made Y&R is crazy.

The details surrounding Detective Rey being brought into this investigation are very murky. It’s odd; we only know that he’s fixated on solving JT’s disappearance, which means nothing good for Sharon, Victoria, Phyllis, and Nikki, and also spelled trouble for Nick, who was arrested at Dark Horse’s launch party. I found it curious that Victoria held herself together through all of this drama after unraveling to such a degree last week. With Arturo coming to work with Nick, there was more of the realigning for Mal Young’s new direction on display. As for Nick being this hotshot now, I’m on the fence. It’s never ever been his nature, or his desire to follow in his father’s footsteps, so that doesn’t ring true, yet it’s more interesting than the former mellow, chill Nick, so we’ll see.

The emotions were conveyed so well by the actors in the Devon and Lily ‘make up’ scenes; I felt what they were feeling. Bravo! However, Devon’s total about face was too abrupt, and it had the sense of a ‘wrap up’ of sorts in the storyline, and immediately had me wondering how much viewers will be seeing of them in the months ahead.

All is forgiven and forgotten not one month after Hilary and her baby are buried and Devon and Lily are best sibs again. A story that could've had great repercussions and family drama for years to come whimpers out in just 1 month. I just can't with these writers #YR

As Jack has now gone through several possibilities in his search for his true paternity, it’s wearing thin. Landing on Albert Miller as the most recent candidate is definitely a terrific way to nod at Victor’s past and also to revisit his rivalry with Jack from a new angle, but as mentioned, as a result of all the ups and downs in the story, there is little enthusiasm at this point for anything other than Jack being proven to be an Abbott in the end.

In another instance of enjoying the acting and not so much the story, Kyle really was able to make the audience feel his disappointment and pain during the scenes with Summer in the Club suite, however, the ‘pull’ to have Summer return his feelings wasn’t there for me due to the way she’s behaved since she’s returned. I wouldn’t wish her on anyone. With that said, I am intrigued by the idea of a Kyle and Lola pairing – a sex life for the guy has been a long time coming.

Many wanted to see Phyllis and Billy in their own storyline but it’s devolved into Billy behaving as a caricature of a gambler in the throes of his addiction, and Phyllis along for the ride, which is believable given the position she’s in, but really isn’t her style. I need to see her taking control of this situation, as she did when Jack was battling addiction, and that is the ‘something to look forward to’ here.

Tessa told Mariah she loved her, and while some were questioning if it was a manipulation, I sensed it was sincere and that the irony in the current situation is that Sharon and Mariah are doubting her when she’s actually not hiding anything and is telling the truth. I could be wrong. As for the attack in the coffeehouse and ensuing scenes, I snoozed through them; just couldn’t get excited.