Deconstructing Y&R: Nick’s Turn to the Dark Side Gets Big Fan Reaction 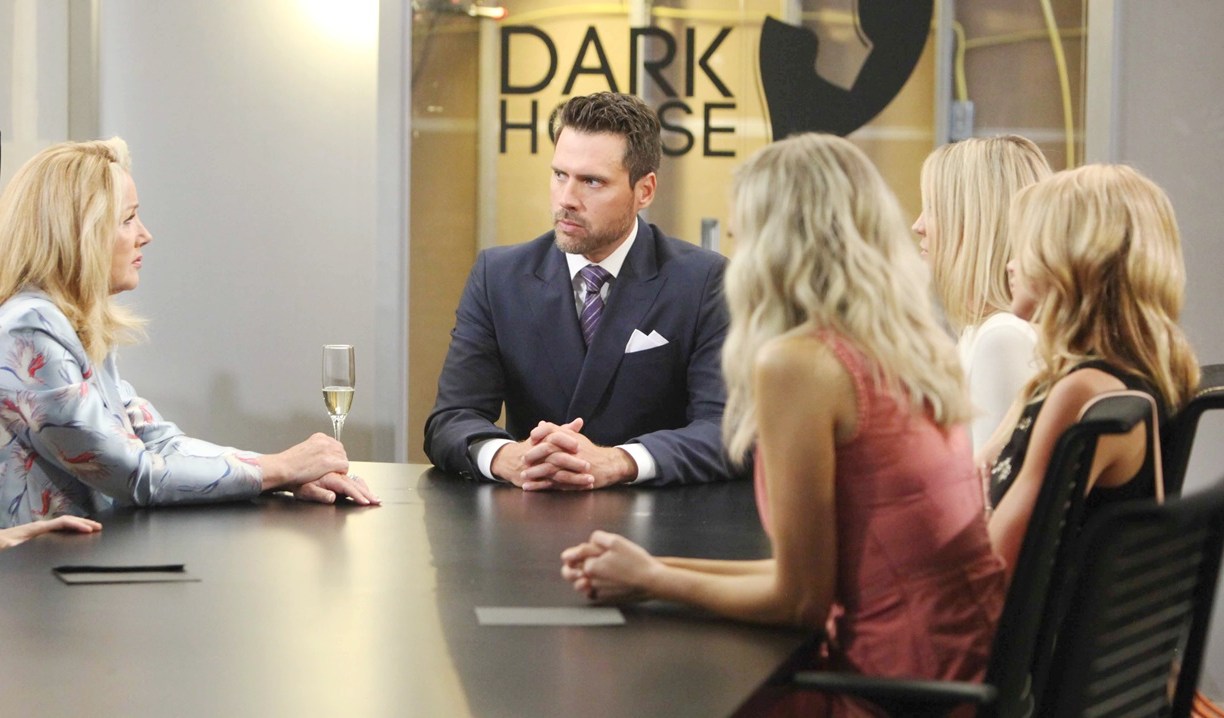 Y&R has become a ‘love it’ or ‘hate it’ proposition for many viewers at this point. They’re either so turned off that they’ve vowed to tune out, or they’re loving the non-stop drama and twists and are on the edge of their seats. My current relationship status with Y&R falls under ‘it’s complicated’. While a steady pace suits me, some things are resolving too quickly and exposition/depth has been sacrificed. At the same time, the twists have me not wanting to miss an episode. The bottom line is, the constant plot ‘shocks’, however entertaining, along with the accelerated pace, are coming at the cost of a deeper exploration of characters’ thoughts and motives that provides the audience with understanding and allows them time to ‘steep’ in the drama when appropriate, as is the Y&R tradition. Thoughts:

His father’s son?
JT turning out to be Nick in a JT mask was one of those ‘camp’ soap moments that made me cringe, but also laugh out loud and holler, “What the actual #*@%?” That led us into a storyline arc with Nick having turned to his ‘dark side’ and, on the heels of the custody win, revealing that he’d started his own company, aptly named Dark Horse, and would essentially beat Victor at his own game while reshaping the family dynamic/legacy. The irony, of course, is in Nick becoming just like Victor, i.e. shrugging off lying to Sharon and hurting Victoria as ‘necessary’ to ‘protect his family’, while simultaneously citing all the times Victor had done the same as the reason for his actions. I’m intrigued with Nick exploring his dark side, though it’s doubtful he’d be able to sustain any level of ruthlessness attributable to Victor or Adam, and as mentioned in the last Deconstructing Y&R, it’s irritating Victoria’s become an accessory to the storyline, which has lacked follow-through on the issues surrounding the domestic abuse and its connection to her relationship with her father. Interestingly, she chose to stay with Newman, and Victor, while Abby defected to Dark Horse. Let’s look at that, maybe? In any case, Jack joining Nick’s company was an unexpected twist that upped the ante a bit. Fans had plenty to say on Nick’s storyline:

I’m applauding Nick because Victor has been playing with this dude too much. Actually, he’s done it to all his kids. It will fail bc Jack is in his alliance. Victoria teamed up with Jack. It didn’t end well for her. Jack is the King of Ls. Dark Horse is short term. https://t.co/gIKGFcpRcS

Nick is the most ungrateful crybaby of all the Newmans.I love young Nick & HATE how Nicks character has evolved. He's self-righteous & entitled..Darkhorse will FAIL! I hope Nicki & Victor KICK ASS and that Adam comes back 2 help Victor restore Newman & take his son back! #YR

Quickie.
While I absolutely loved Jack’s interactions with Jill, her visit was too short, and once again, the wrap up to the question of whether Phillip Chancellor was his biological father was too pat. Conveniently, just as the DNA test came back showing no match, Dina trotted out a photo album containing the missing diary pages that explained she and Phillip had spent time together platonically. While the mystery of the ‘Jack’s not an Abbott’ DNA test Abby ran remains, this quickie resolution was an eye-roller.

A question of trust.
Phyllis and Billy’s passion and energy translated into some very entertaining ‘fight’ scenes as she discovered what he’d been covering up and threw him out in a fit of temper. Whew! While I think cooler heads will prevail eventually, there’s now the issue of Phyllis having subconsciously ‘retaliated’ by hooking up with Dark Nick. While their ‘heat’ was enough to have me clicking on the wrong tabs while recapping, of course it’s a hot mess and unfair to their significant others, regardless of being ‘on a break’ or what have you. It’s a soap, so it will come out at the least opportune time too…yikes. In other Billy-related commentary, I enjoyed the twist with Ashley striking an alliance with Kyle as she senses something’s up with her brother.

The unexplained.
Well, Hilary’s exit story is upon us and it’s been a bit of a mess. The contrived animosity between her and Nate, Devon’s sudden business trips, Hilary’s random meeting with that Marc guy (a job offer?), her mercurial moods – none of it has made much sense – and it all abruptly came down to a trumped-up argument between Lily and Hilary that led to a car wreck. The scene where the truck made impact was heart-stopping, consequently, Lily and Charlie coming out of that unscathed was completely unbelievable. I also didn’t get the headwriter’s choice to spend time on that silly showdown between Nate and the other doctor. While Devon and Hilary’s devastated reaction to losing the baby had me tearing up along with them, and the storyline will have fallout for the Winters and Ashby families, the lead up has left much to be desired.

In related commentary, one of the last things Hilary did prior to the accident was to urge Mariah to embrace her second-chance with Tessa. Mariah and Tessa both seemed to be tentative but determined, and their ‘moments’ were really sweet. The chemistry is still there, though it’s different than before. Unfortunately, they barely got started on a reconciliation before hitting a roadblock.