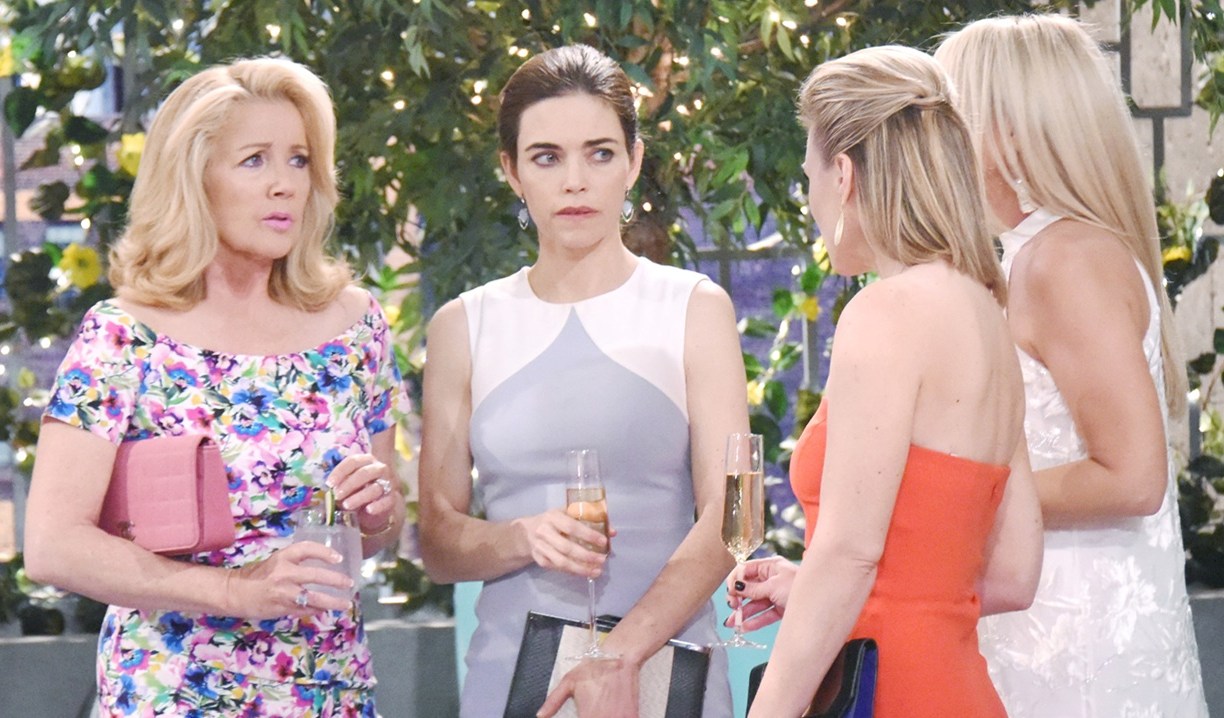 The stories with history supporting what’s happening are working better for me than the ones that need more exposition, i.e., I understand Nick’s frustrations with Victor, but have no idea why Summer is intent on trashing her mother’s relationship. The perplexing ‘return of JT’ developments are intriguing as we know he’s dead and buried and not running around South Dakota and Iowa – right? Thoughts:

Club affairs.
Jack’s journey to discover the true identity of his father took an interesting twist with the Phillip Chancellor angle. The clues still seem to be falling into line a little too conveniently, but I’m all for bringing Y&R’s history into this story. Cane leading the pack to keep Jack ‘at bay’ makes sense given his protectiveness of Jill and Chancellor Industries, but he wouldn’t be the person to okay or deny exhumation, so it would be amazing to have a blood Chancellor get involved. In related commentary, office sex is always soapy goodness – the way Cane lifted Lily onto the desk after going a round with Jack definitely got my attention.

A new man.
As noted in the last Deconstructing Y&R, Nick’s new stance toward Victor was refreshing and had fans fired up. The defiance continued as he rejected Brittany’s warning to dump Sharon, and instead proposed to her – going all in, so to speak. He also did some posturing during a visit to Victoria at Newman Enterprises, though his sister ended up with more critical concerns with the messages from the disembodied voice and the boxes of confidential files that could wreak havoc on the company. Ashley connected the dates on the files to JT’s tenure as head of security, then Mac returned with news of JT’s credit card being in use, all of which was definitely freaky, and had viewers speculating:

Maybe JT rose from the garden of death and is messing with Victoria. #YR

Not JT. Wrapped in a rug, dragged around for hours. No “Swiss Dr can cure THAT”?. Adam was never found. No teeth , bones, watch were found. Don’t forget the gloved hand putting away his wedding ring. It has to be???#yr

Of course, given Nick’s new determination to do whatever necessary to deal with Victor, others thought it might be him. It also occurred to me it could be Paul, who is in possession of JT’s cellphone and tablet, trying to rattle Victoria into a confession of some sort.

Daughter dilemma.
There’s still no understanding of Summer’s reasons for trying to tank her mother’s relationship. Throwing in a line about Billy ‘bringing her mother down’ just isn’t sufficient. It’s very reminiscent of the offhand explanation for JT becoming abusive – ‘he had a difficult few years’, which didn’t cut it either. In these cases, where the history’s not there to obviously explain the character’s actions, the time needs to be taken for deeper exposition, so that viewers can at least try to understand and not be left bewildered and feeling outside of the loop. Summer’s edgier ‘devil-may-care’ disposition seemed it would be fun, but so far that hasn’t been the case.

Skittish.
Abby and Arturo are still hot, but I’m really hoping it’s not going to devolve into a series of ‘misunderstandings’ that have Abby stomping off and trying to call it quits. Not appealing. I’m sure we’ll find out that bra she found belongs to his sister or something. In related commentary, Nikki narrowing her eyes at Arturo salsa dancing with Ashley was good for a giggle.

Oh baby.
Hilary’s morning sickness stuff was funny (loved Phyllis ratting her out to Devon), and it was super sweet for Devon to take her on a babymoon. Oh, and who is in the penthouse while they’re away? Charlie and Shauna…they are cute sneaking around, though not bowling me over. I think Charlie’s shy about sex because he’s a virgin!