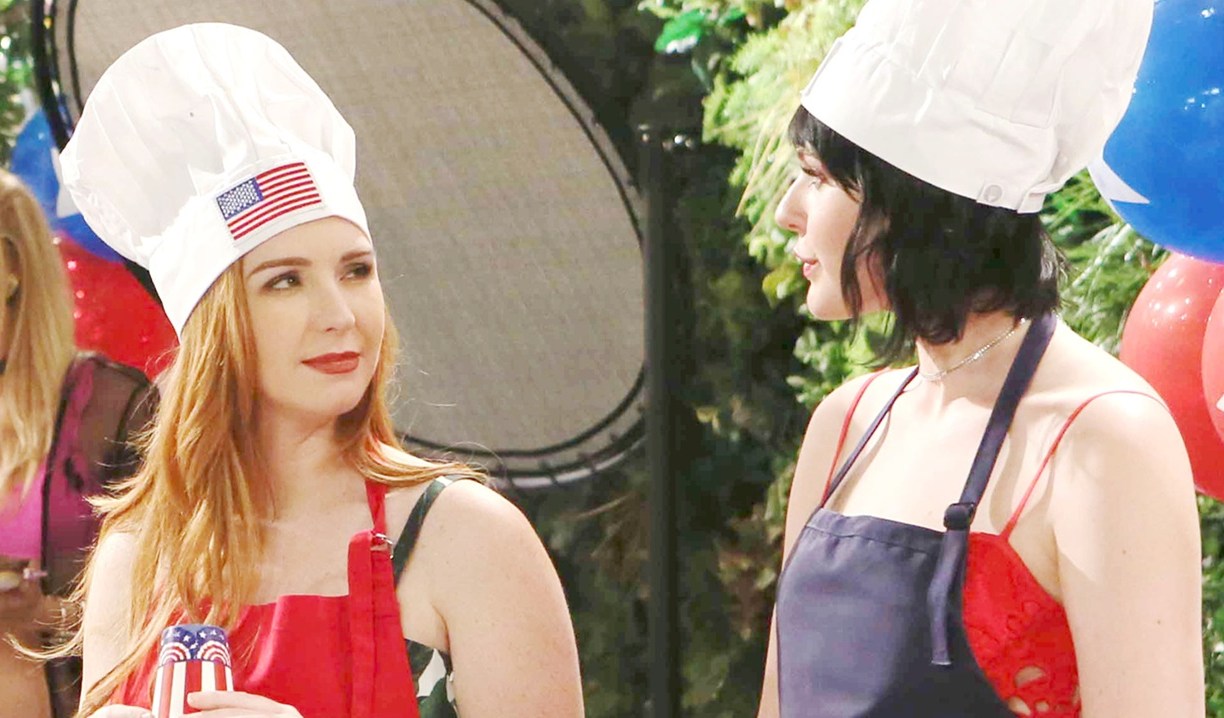 Y&R kicked off on Monday with a soapy goodness-filled Memorial Day gathering, and the ensuing family and business drama, and romance kept viewers reacting all week before Friday’s fun at the Dive Bar. Thoughts:

Hot stuff.
The Memorial Day barbecue was excellent, with numerous characters and storylines intersecting. These gatherings are one of my favorite things when they’re loaded with nuggets of goodness, from the comedic to the snarky to the romantic and dramatic. From the dialogue to the facial expressions and looks shot across the pool deck…all were spot on. Jack sharing his paternity news, Kyle learning about Mariah and Tessa, Devon and Hilary flirting, Victor announcing Nick’s return to Newman, Charlie and Shauna’s kiss…the list goes on. That said, I would have loved to see long-term characters such as Paul Williams, Lauren Fenmore, and Michael Baldwin included. An observation:

I am so here for Charlie/Shauna. It's about time the young people got some romance. #YR has spent too much time on the Life Alert crowd.

The more things change, the more they stay the same.
In the last Deconstructing Y&R, big changes hit Newman Enterprises as Nick was enticed back. Victor then handed Nick the COO position while leading him to believe Victoria would be fine with it. I’m not sure how the Mustache expected that to play out, but it didn’t go over well with Victoria or Nick, who confronted Victor about playing the siblings against one another yet again. This prompted a confession from Victor to Nick that despite what he told Victoria, he actually sees her as weak for not leaving JT sooner (ugh), and that Abby, Noah, and the female grandchildren weren’t in the running to take over Newman either; he envisions little Christian helming the place one day. Nick was seemingly offended by the sexist, old school views and concerned enough about Victor’s interest in Christian to finish with his father again. An unexpected moment of vulnerability ensued, as Victor, who just doesn’t get it, shed tears, before shoring up and channeling his frustration into a more typical response – striking back. I didn’t see the Christian custody battle coming at this point, but here we are…and boy does this have the potential to get ugly. Fans reacted to the Nick/Victor clashes:

#YR Victor is disgusting going on about how none of Nick's children are worthy of Newman. Faith is quick as a whip but soft-hearted. Aka she's a female.

Victor SHOULD sue for custody of Christian. Nicholas is nothing but an ingrate. #YR

Victor is so controlling with his children and it's sad. If Nick should take him to court, he'll drag Sharon's name into the mix and dredge up her past about raising Christian as her own and led him to believe he was dead. #YR

In related commentary, Nick decided he wanted to skip town, which led to an entertaining confrontation with Nikki blaming Sharon, and Sharon all but shoving her out the door telling her to go ask Victor why they’re moving. It’s a relief they’ve kept the animosity between the women despite them sharing the JT secret.

Miami heat?
So far so good with Abby and Arturo, who actually drew me in when they met up at the Dive Bar – they’re really cute together. Nikki spotting them kissing made me cackle a little bit in anticipation of what would come next, though I was also worried it might consist of Abby stomping her feet and pouting at Arturo and Nikki behaving like a jealous ex-girlfriend. It turned out Abby and Nikki’s conversation was actually funny (loved Abby cringing at Nikki and her father being ‘swingers’) and made for a really good couple of scenes. I hope Arturo has surprises and is not a gold-digger.

Lost boys.
Jack moved out of the only home he’s ever known, then faced rejection when he made a business proposal to Neil and Devon. This tugged at the heartstrings, nevermind his teary conversation with Traci, which was even more emotional. I’ve seen a few saying they’re over Jack’s self-pity, but honestly, I’d feel ripped off if they’d portrayed him shrugging off such a life-changing revelation after a few days. Some feel it shouldn’t even matter much, as regardless, he grew up as John’s son, but it would be deeply affecting to learn the foundation of your identity your whole life was untrue. I expected to see Jack adrift and struggling for a time. In related commentary, ironically, finding out he and Jack are not Abbotts, seems to be bringing Kyle back into the family fold. Though they might throw him out after the ‘birthday suit’ incident. So funny; the reactions were priceless!

Starting over.
We finally learned that Hilary is pregnant, and the lead up, with the flirtation at the barbecue, Devon’s romantic surprise spa day, and them sharing a kiss, was well-paced. Hilary was relieved and overwhelmed with the news, which actually led her to fall into Mariah’s arms (too funny), and after a frustrating day of trying to get a word with Devon, it was ‘Auntie Lily’ who helped her out. The way Hilary told Devon was sweet, and you could sense the joy in their embrace. It’s been a long time coming for this duo.