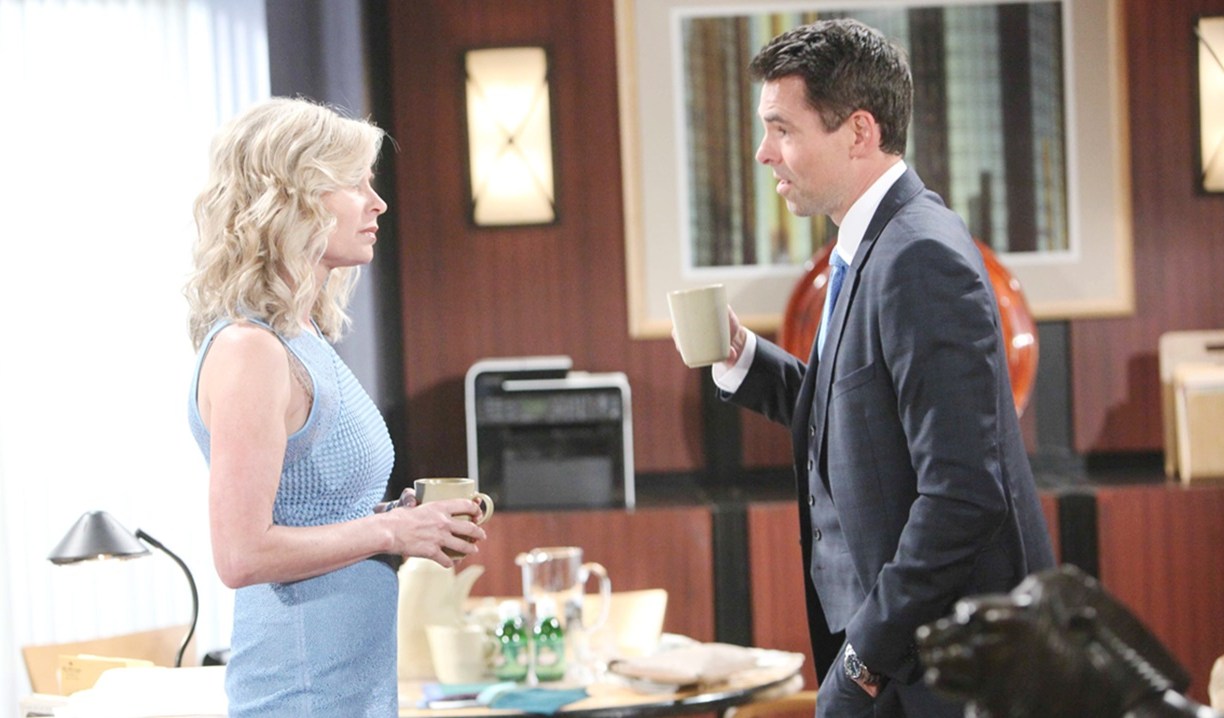 The drama was steady but more understated this week, with no truly shocking twists, though Jack deciding to leave Jabot was a very big deal, and Nick returning to Newman Enterprises will significantly change the dynamic there. Thoughts:

Trouble ahead?
Nick and Sharon featured fairly heavily as news spread of their reconciliation, and ran the gamut from Mariah’s blunder into the bedroom to Nikki’s terse disapproval, to Victor and Phyllis’ oddly calm acceptance of the situation. Victor’s approval may have been a trade-off to get Nick back at Newman, and it worked. Nick deciding to return seemed like a step backward to me, but it will change the dynamics at Newman, so there’s that. Sharon and Nick also remembered Cassie on the anniversary of her death, which was thoughtfully done. Though they were at odds over Nick returning to Newman, the Sharon and Nick pairing already has a ‘settled’ feeling, which made me wonder where the next drama will come from for them – the JT storyline or perhaps, since Summer is returning and – spoiler alert – will be in the ‘behind bars’ kind of trouble, Nick will be spending time with Phyllis. Here’s hoping there are no plans to revisit a Sharon, Nick, Phyllis love triangle.

Summer time.
Summer’s return will certainly impact on Kyle, and revisiting that pairing might be preferable to him hitting on Tessa. It will be interesting to see if Mal Young writes Summer differently given that previously she was often dour and sulky. Here’s hoping she will have chemistry with Kyle (if that’s the direction we’re going).

Power plays.
Kyle has kept viewers guessing as to where his true loyalties lie as he cozied up to Jack in the aftermath of learning they’re not Abbotts, co-plotted a coup against Billy, and despite his rebuff from Victor, seems poised to stay at Jabot as a mole even with Jack’s shocking decision to resign. Billy went from zero to super-confident overnight and there’s the question of whether he will ‘screw up’ as Jack predicts, while Ashley is also seemingly angling for power, so yeah, I’m enjoying the turmoil and changing dynamics at Jabot as this plays out, along with the hint of comic relief with Gloria’s return – like the mention of her taking too long at the paint store with Arturo – and moments like Ashley arriving to find Billy and Phyllis locked in the CEO’s office. Too funny. Viewers reacted to the situation at Jabot:

Ashley gunning for Billy today was completely uncalled for, she asked him to take over and he did, wants to make his own mark. Too bad, go back to Newman. Tired of the ungrateful/bitter pill Abbotts. #YR

Strip down.
With Arturo hugging Abby after overhearing her phone conversation with Victoria, it was reminiscent of her and Scott, with the guy feeling protective of the poor rich girl. I’m not sure about this formula, but they’ve had some ‘moments’, and their excitement over deciding to go to Miami together was cute, so we’ll see.

Promposal.
The lighter fare with Hilary, Devon, Charlie, Shauna, and the prom stuff is exactly what I was looking for as a balance for the darker storyline of Jack’s spiral, and the tensions among other characters. Though soaps are dramas, there’s nothing better than watching episodes that make you feel a range of emotions. Lily and Mattie seeing Charlie off to prom in his tux was heartwarming, and Devon’s response to Hilary’s prom queen story was both gracious and romantic. As noted in the last Deconstructing Y&R, Hilary’s pregnancy still needs to be confirmed – waiting!

The opinions expressed are mine. Feel free to comment in the section below.