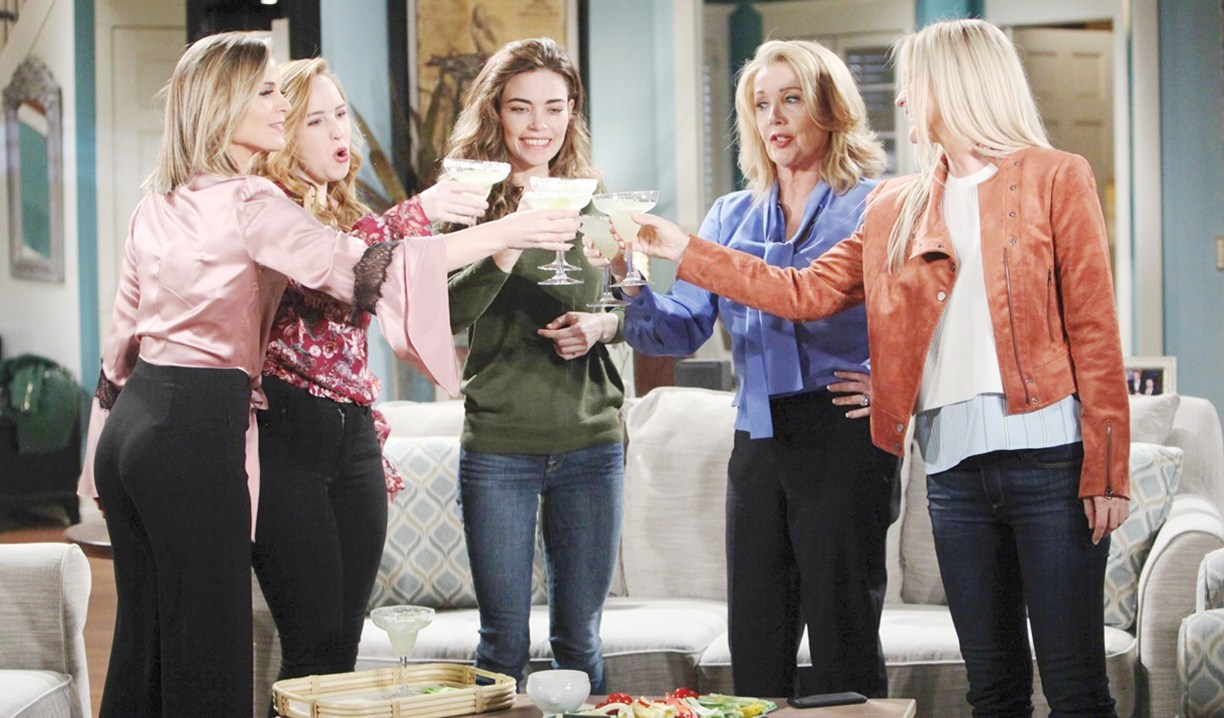 It was another week of Y&R where I couldn’t wait to tune in each day and find out what would happen next. There are so many goodies packed into each episode, whether it be unforeseen twists such as Nikki being confronted with the news that Victor had been dallying with the Jabot chemist, genuinely funny comedic references, or unexpected dramatic turns. Of course, I don’t agree with every move the head writer has made, but then I’ve watched since I was young and have always had beefs. Thoughts:

Expectations.
I’m not sure what’s in store for Hilary and Devon after the latest setback, but it’s clear fans are tiring of the manufactured conflicts, which are feeling overused at this point. In any case, Hilary should soon know if she’s pregnant.

Kyle’s wild ride.
There was another male’s blood found at the ranch crime scene at the beginning of the week so I feel like Jack could have made a case for release, or bail at the very least. In any case, he remained ‘inside’, fretting and powerless while Kyle freely pursued his agenda at Jabot. Kyle’s proving to be an interesting character, and a troublemaker for sure, though I don’t ever remember him being this sharp. He’s shaking up the Abbott family landscape, but his loyalties are impossible to pinpoint, so I look forward to seeing how his machinations play out. Loved the bit with Kyle advising Ashley to enjoy the profitable ride, and her snarky reply that she was getting off as she was already motion sick. Too funny! As for Kyle pitching Lauren to vote in his favor, and Lauren then making it clear she expected her pal and employee Phyllis to follow suit, I could easily imagine Phyllis quitting before voting against Jack and for something that would benefit Victor.

No rehash.
Having Nick go off with Phyllis and make a random video call to Summer and take a ‘raincheck’ on plans with Sharon seemed like another effort to re-introduce the friction of this past love triangle. While all the characters involved have fabulous chemistry in scenes, which makes them entertaining, I’m definitely against the idea of regressing them to the point of a romantic triangle again. They’ve moved on to an extent where trying to milk it again isn’t advisable – triangles that are rehashed umpteen times become stale and predictable for viewers. Here’s hoping the friction continues without ‘going there’. In related nitpicking, please don’t have Sharon advising Victoria not to center her life around a man while simultaneously depicting her as overly-focused on Nick – it’s annoying since Sharon has actually become stronger and independent.

A night to remember.
The big story was Victoria being manipulated a final time by JT, who leaked the memo about her demotion as a means of convincing her to leave town with him. For those who have said Victoria was blind or somehow deserved what JT gave her – we need to stop blaming the victims of abuse.

I’m glad you are doing with the Domestic violence. So many girls and women go through abuse and try to put it off that it’s their fault just as he does but they need to know it’s not their fault and they’re not the one that’s got the problem. So again thank you

Once in Hawaii (which was so well produced I actually felt like they were there), JT smoothly continued his controlling ways by locking up her cellphone in the name of relaxation. Victoria became uncomfortable when he talked about never going back to Genoa City and within minutes had read through his texts, deduced that he had been gunning for her father, packed up, and left. Back home, Victoria dealt with her disgruntled teenager before seeking refuge at Newman, where she broke down with none other than Ashley, who quickly turned off the rivalry to comfort her. Loved it. Later, Victoria had a girls’ night thrust upon her. The scenes leading up to it were soapy goodness – Mariah and Sharon at Crimson Lights juggling tequila and limes while struggling to come up with a guest list, and a dubious Phyllis asking Billy if Christine would be driving the car – hilarious. At the party, Nikki admitted to having a boy toy, and Mariah slurred that she kissed a girl and really liked it before passing out in the den to sleep off the margaritas. So good! Of course, a more serious reveal came later from Victoria, after JT’s visit when she very satisfyingly ordered him the hell off her property. As this improbable gathering of women bonded over the merits of being strong and honest, Victoria decided to confide that JT had been abusing her. Such a huge moment in more ways than one.

Victoria told everyone. And everyone is actually having a good time. What is this sisterhood on deck? They really about to kill together. A. SQUAD ????????????

This ladies night is literally the best. @camryngrimes, @ginatognoni, @ameliamheinle, and @MelodyThomasSco have a natural delivery to their lines. Drunk Mariah confessing that she kissed a girl and liked it? Even better. Love love loved these scenes! #Teriah #YR

As discussed in the last Y&R blog, Mal Young’s brought viewers inside Victoria’s struggle and I haven’t related to the character this well since she was falling in love with Travis. Her journey has been humanizing, and showed that even ‘strong’ women can find themselves in a domestic violence situation. JT’s side of things wasn’t delved into as deeply, which is regretful. In the end, JT came back one too many times, confessed to one too many things, and got into Victoria’s face with the wrong posse of women there to come to her rescue. I love the soapiness of Nikki clobbering him with the fireplace poker, and the storyline ramifications moving forward. I think my favorite part, however, is the unlikely bond these women now share.

This is my opinion, and I’d love to hear from readers in the comment section.