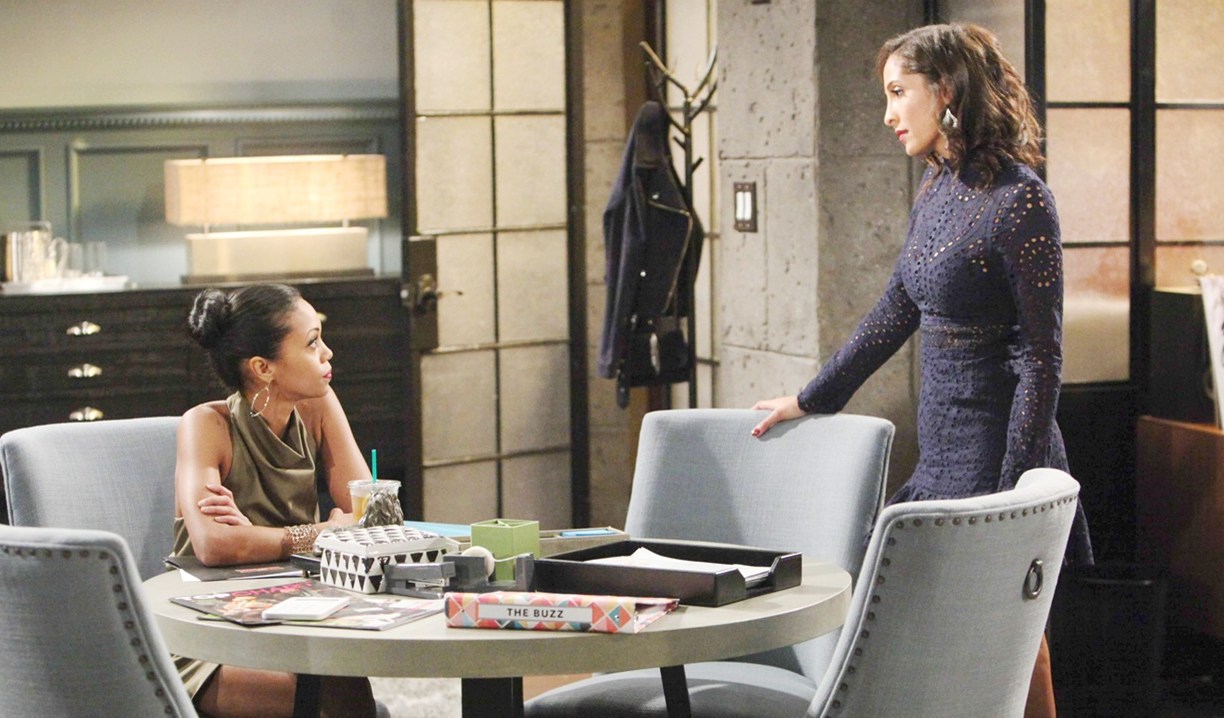 It’s an abbreviated week for CBS soaps, as Y&R is pre-empted for NCAA March Madness, though the episodes weren’t short on new developments. Thoughts:

Family ties.
Viewers could buy Ashley’s presence at Newman Enterprises upsetting Victoria given Ashley’s tangled past with the Newman family, and from that premise a solid character-driven storyline would have been possible. Unfortunately, as mentioned in the last Deconstructing Y&R, Victor being duped by Victoria and Jack and out-investigated by Abby was beyond a stretch. The paper trail so conveniently left by Jack was an eye-roller, and Victor pouting to JT that they’d both been lied to, made things feel even more surreal. Several players have been written out-of-character to enable this plot, as well as the connected storyline of Victoria’s self-esteem dipping so low she’s allowing JT to abuse her. With Victoria facing a demotion and Abby chirping, the best thing to come out of this whole situation in the past few episodes was arguably the scenes with Victor ‘standing in’ for John to fulfill Dina’s imaginings of being escorted to the ‘winter formal’. Not only did it tug at the heartstrings, but I always enjoy the contrast of glimpsing Victor’s softer side. Some agreed:

Today’s episode of #YR was probably the sweetest most precious episode I’ve seen, and I haven’t missed an episode in 40 years. @YandR_CBS #YoungandtheRestless #alzheimersawareness @EBraeden

Baby daddy.
Devon agreed to father Hilary’s baby, which was a sudden change-of-heart after the endless months of dragging out any renewed closeness between the two, and considering Devon’s recent coldness toward her. It’s a soapy situation, rife with possibilities. Michael’s appearance as the dubious party enlisted to help negotiate the deal lent some humor to the proceedings, and when Devon asked Hilary how they would create the baby, their chemistry was screaming ‘the old-fashioned way’ even as they settled on conceiving through artificial insemination. Lily overheard and wondered if Devon was losing his mind, prompting him to say if she couldn’t accept it, she could leave. This left me wondering at the fine print on their deal – is he her boss or is she truly running her own company? If so, why doesn’t she have her own space? Anyway, as ridiculous as it is having them all crammed in one office, it’s clear the headwriter plans to ramp up the rivalry between Hilary and Lily, which does have potential to be entertaining, as the actresses play it so well, but is more likely to become headache-inducing. Many viewers, whether Team Hilary or Team Lily, don’t seem to be feeling it:

I like Lily & all but I wish they keep Lily out of #Hevon baby situation. If Devon wants a baby with Hilary then it should be his decision not hers or anybody else’s. She took back Cane & raising Sam & nobody was in her face about that. Leave #Hevon alone. #YR

#YR I sure wish Lily wasn't always inserted as Devon's thinking brain…. let him jump in the water if he drowns, he drowns – she can perform CPR then.

Lily goes hard for her brother, I get it, but it’s his businessif he wants to have a baby with Hilary. #YR

In any case, Lily heard Hilary booking the insemination, which left some wondering if she might do something to sabotage it.

Busted.
Nikki and Arturo’s run-in with Victor was gold as he thanked the guy for doing such a good job for his wife since she was glowing. Too funny! Vic obviously assumed he was her personal trainer. Later, Nick getting an eyeful of his mother wrapped around the shirtless contractor at the suite door was even better – we could just imagine the thoughts going through his head as we know him so well. Sharon will love this nugget!

I express my opinions in the blog, and would love to hear yours. Please use the comment section below to share your thoughts.