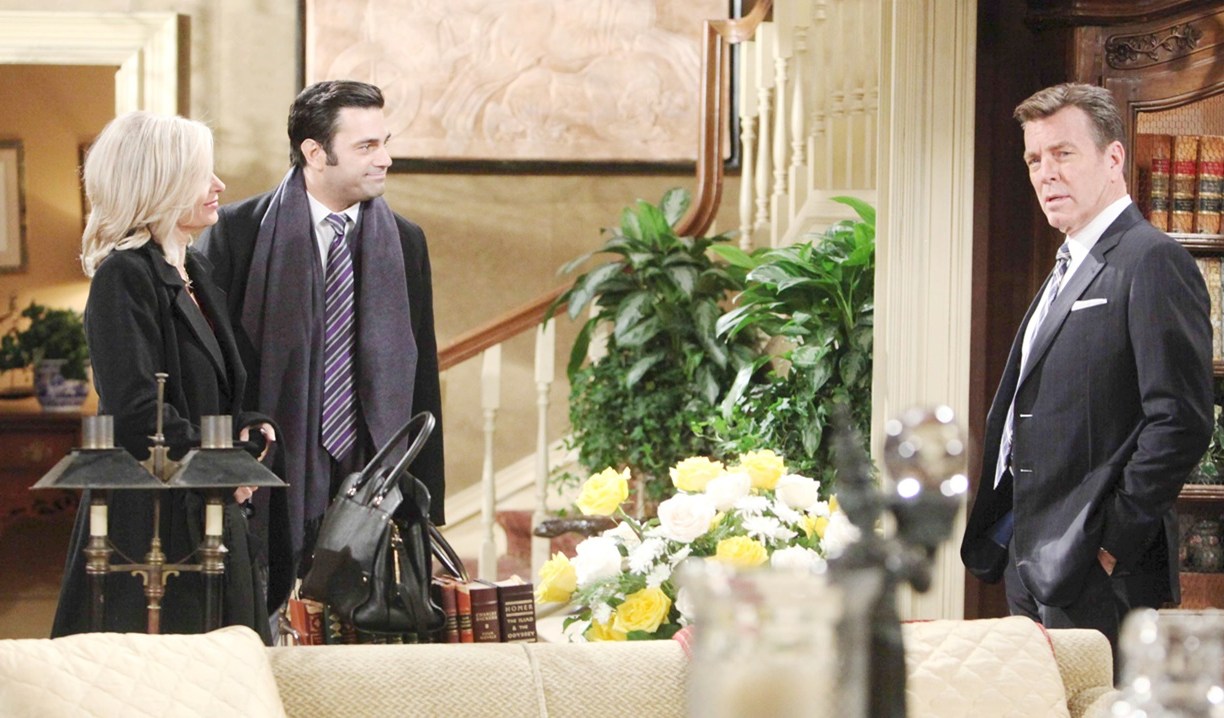 I’m continuing to enjoy the writing, unexpected interactions, and often gasp-worthy episode-enders, but still have issues with some of the pacing. While some stories (JT and Victoria) seem way too rushed, others, such as Nick and Chelsea’s eternal abyss of chemistry-free sex scenes and mundane misunderstandings, feel like they’re at a standstill. Thoughts:

Working it.
In the last Deconstructing Y&R, we expressed concern about JT and Victoria moving at warp speed. There was a real rush to get JT and Victoria into a serious relationship, after which JT’s pill-popping was immediately exposed and an impatient, semi-tense demeanor began to emerge. It seemed he may have an addiction, but then the heart condition came to light, which caused me to switch gears in thinking as to how this might play out. Meanwhile, their ‘moments’, such as slow dancing or JT sweeping Victoria up into his arms, make it worth investing, as the chemistry is unbelievable. In JT related commentary, it’s super amusing to me that he, Cane, and Billy don suits to take meetings, but only ever discuss personal issues.

Moving on.
I felt the sweeping off of Dina to Paris to be with Abby wouldn’t be advisable/feasible in the real world, and I appreciated Jack’s reluctance for that reason, but in the soap world…the show must go on. It will be interesting to see how they will deal with the Dina character upon Abby’s (presumed) return. It was hilarious that the decision was made, then Dina and Traci were out the door headed for their flight in what seemed like five minutes. As for the Jabot arbitration, there was appreciable tension awaiting the ruling, with that interesting angle of having Jack and Ashley ‘talking’ to John with their own perspective on how he would feel, followed by a certain relief that the decision was finally made, only to kick us into more drama as Ashley announced she was wiping her hands of Jack. While some felt apprehensive about yet more drama for the Abbott family, it definitely opened up that ‘what will Ashley do now?’ door and it wasn’t long before Victor walked through. Not only does this twist make Jack the author of his own troubles competition-wise, but the nod in conversation to Ashley and Victor’s history was definitely intriguing.

Baby steps.
Hilary’s humanity has been restored as exhibited in her interactions with the likes of Mariah and Lily, which are no longer coming across as ‘one-note’ scenes exchanging bitchy lines purely for the sake of it. They are now actually semi-realistic conversations depicting women with complex relationships – where the history and animosity is always there, but with moments of understanding – much more satisfying to watch. I say semi-realistic because the Hilary and Lily scene still felt like a stretch, despite the authentic plot point of Lily struggling to get right with Sam. Later, Hilary’s blind date with Ravi made for some fun scenes and interactions with all involved. Again, the pull is so strong between Devon and Hilary, even across a room, it’s a soap goldmine, and one that clearly is going to be milked at length if the current direction of the ‘Hilary wants a baby’ storyline is anything to go by.

Exposed.
So, the twist with the stolen journal story is in the irony of Mariah being forced to expose her feelings for Tessa because Tessa did something so unsavory that it likely killed those feelings. While I was definitely ‘feeling’ Mariah in all of this, Noah’s outrage, while legitimate, didn’t affect me as he has been relegated to the fringes of the show for too long. As Tessa is lacking credibility at this point, it left me wondering where she goes from here. Others were questioning as well:

Ugh, now Tessa is using emotional manipulation on Mariah. I have never liked Tessa, but the cynic in me wonders if the writers are making her so unlikable that people will stop shipping Teriah. #YR

It really feels like they don't care about Tessa anymore and she's on her way out.. #YR #Teriah

The blog represents the author’s take on the show. Feel free to give your opinion in the comment section below.