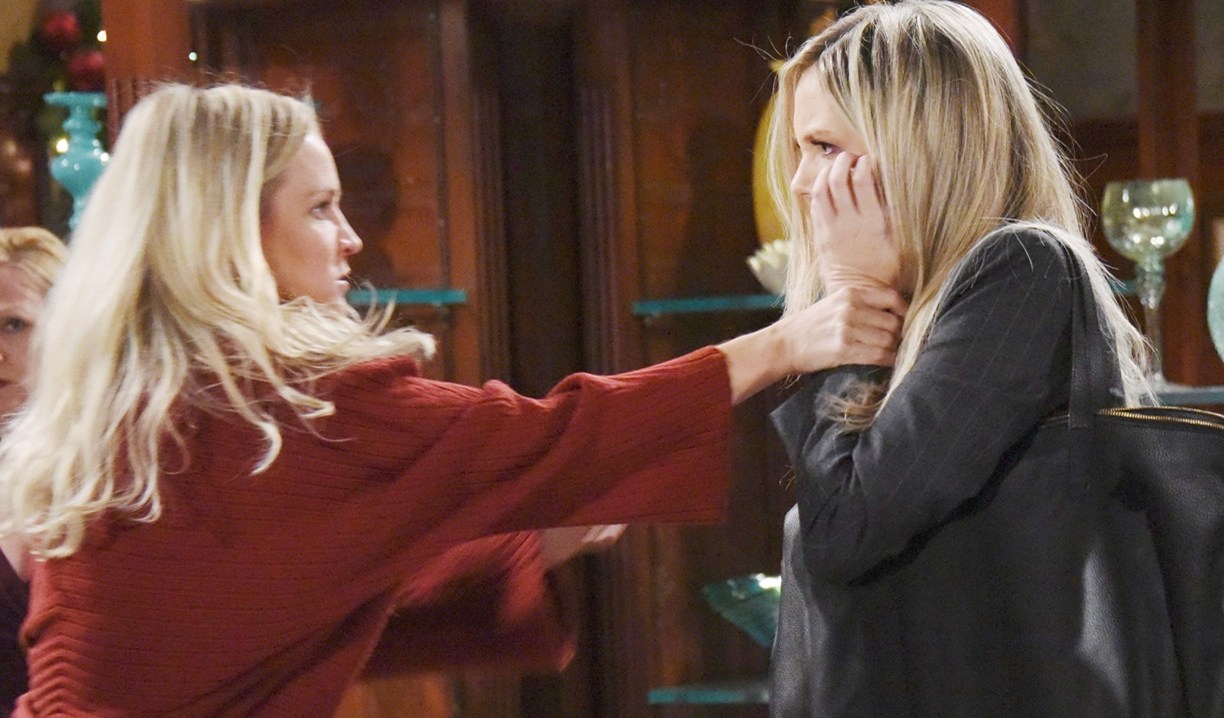 It was a shorter week again, but “Y&R” certainly wasn’t short on drama as Sharon learned about Scott cheating, and Christian went missing and was found in most unexpected circumstances. Thoughts:

Bicker Bros Inc.
The scenes between Billy and JT just felt spot on with the verbal back-and-forth, I really enjoyed them. Likewise, it was good to see JT reconnect with Lily, and realistic for them to spend a minute commiserating about their marital issues. Though I was glad Jill elected not to sell Chancellor, as the premise didn’t quite ring true, it was less pleasing that she manipulated Billy into being Cane’s co-CEO. Few are up for a return to the tiresome bickering from Brash & Sassy, although this time JT will be in the mix, which could be interesting. This also left me wondering, does Chancellor even have offices in Genoa City or are Cane, Billy, and JT just going to run it from the house? By week’s end, Billy and Cane were indeed at each other’s throats, but perhaps Cane will be in a better mood after that passionate kiss with Lily? That’s one reunion in the works, now let’s see Hilary and Devon.

Do not cross Sharon!
In the last two editions of Deconstructing Y&R, we hoped for Scott’s cheating to be exposed and for Sharon to react in a spectacular fashion. When it finally happened, courtesy of a grim-faced Nick, we were not disappointed, as we not only got to see popcorn-worthy confrontations between Sharon and Scott, then Sharon and Abby, but also the added entertainment value of the catfight on-lookers at the Club, who sported some great facial expressions – loved Connor looking blasé and Graham sipping his scotch with a smirk! What’s more, we also got a scene of Sharon dumping Scott’s belongings on Abby’s doorstep and grinding his engagement ring into the dirt. Amazing!

Adding to the chaos at the Club was Lauren running around trying to get her two cents in about the Scott/Sharon/Abby situation – one minute seemingly pleased he may have moved on from Sharon, the next chastising him and Abby for their behavior, which prompted this comment:

I don't like Abby but Lauren acting like her son Fluffy is sixteen yrs old is getting tiresome. He's a grown man. ?

Of course, Christian also went missing, which led to some nasty words being exchanged between Nick and Chelsea, another pairing many are hoping will blow-up magnificently, particularly after their repeated and mystifying appearances in promo after promo. I’d say the writing is on the wall with the mentions of how Nick would feel if he ever lost Christian. So ready!

Help needed.
Amongst the latest round of fighting between Ashley and Jack, they were startled to discover that Dina was entertaining none other than Nick’s toddler son upstairs, whom she’d brought home from the Club after getting it into her head he was her ‘Jackie’. An unexpected outcome that led to more scenes of heartbroken emotion from the Abbott siblings and their mother. It turned out that Graham had enabled Dina to abscond with the child, perhaps seeing it as a way back in as he threw it up to the Abbotts as one of a few failures on their part, along with the stabbing and the fire. Tension ran deliciously high in the Abbott mansion as Jack reacted by kneeing Graham in the groin, and Graham hollered that he would take Dina away. The drama! Many were excited about Max Shippee’s return as Graham Bloodworth:

Max has been gone far too long! Give the man a contract and keep him on the show!

The blog expresses the opinion of the author. Please feel free to give your view in the comment section below.