Deconstructing Y&R: Jack’s a Christmas Grinch As He Blindsides Ashley 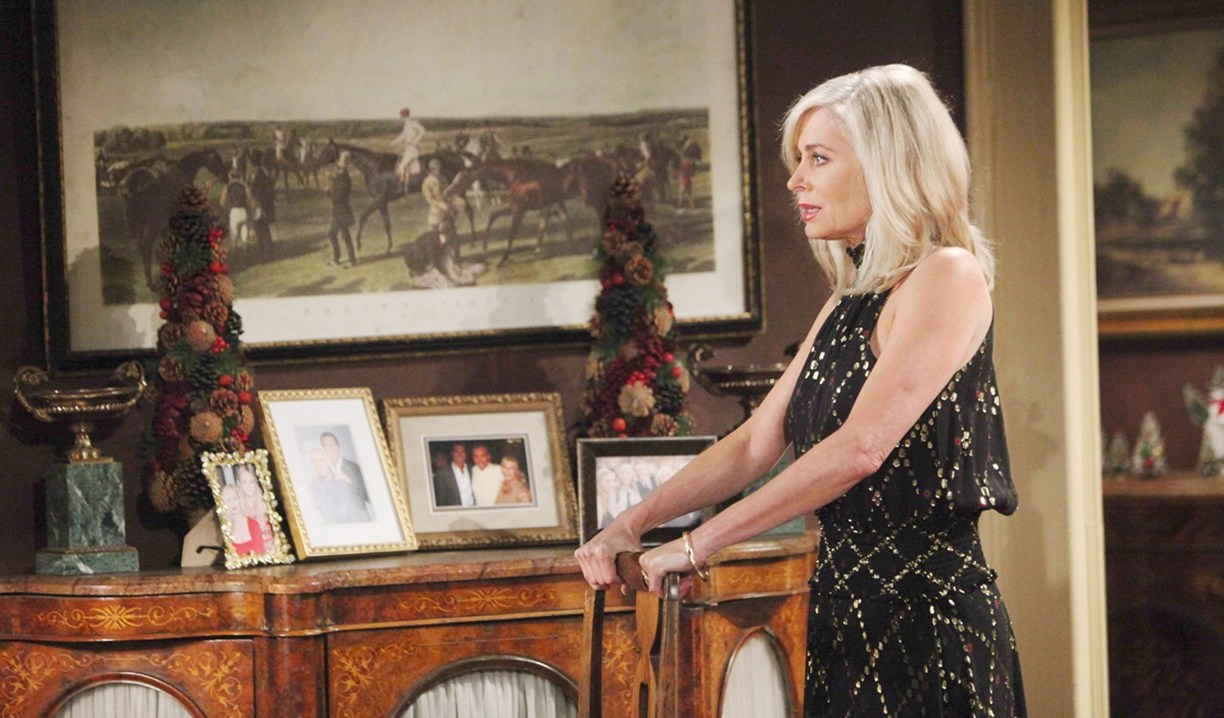 Aside from still adjusting to the pace, I enjoyed the storylines on “Y&R” this week as we saw a variety of characters, drama, comedic bits, and overall it was thrumming along with lots of things happening going into the holidays. The Friday ending not only saw some coming together at Christmas, like the Ashby family, but a soapy stunner as Jack and Ashley ended up further apart than ever. Thoughts:

Staying for the holidays.
In the last Deconstructing Y&R, we wondered if JT’s return would live up to the hype, and though nothing explosive has gone on with the former Genoa City resident, his return has brought solid drama through his involvement in the Newman investigation and his revelation that he and Mac had split up, along with super satisfying nuggets of history as he’s run into people. Loving it, but disappointed it doesn’t look as though we’ll get to see him with Victoria and Reed at Christmas.

Time’s up.
JT’s run-in with Abby resulted in her storming off in a tantrum, which is par for the course for this petulant, irritable character. The Sharon/Scott/Abby thing has totally jumped the shark for me. Mariah tangling with the deceitful duo made for a few good scenes, but I’m past ready for Sharon to know, Scott to go, and Abby to do whatever she’s going to do.

More: Y&R Recap: Katherine reaches out to Nikki at Christmas

She’s back!
Jill’s return felt invigorating and upbeat, which was a nice change from miserable and meddlesome. Though I’m not entirely sold on her wanting to spend her life helping people and suddenly deciding to sell off Chancellor Industries, which had such huge significance to her, I do feel willing to see where it goes. The scenes between Jill and Jack were awesome, as always, though again, the thinking that Katherine would have wanted Chancellor to go to Jack and not Victor or one of her family members is up for debate. Charlie putting in his two cents with Jill on Cane’s behalf was cute.

Fun and games.
Loved Nikki buying Chancellor Park with the money she took from Victor! How fun was it when crowed to Nick about the look on Victor’s face when she told him? As for the Mustache tricking/blackmailing her into moving back to the ranch, I was glad he had a line about not expecting her to share his bed, otherwise…ick! Anyway, they have a bit of a twisted relationship and so it’s not surprising she decided to stay even after his blackmail was revealed, and I was kind of enjoying their vibe and bantering. Fans reacted to Nikki’s purchase:

#yr Best part of the show today for me? Nikki telling Victor she used his money, that she stole, to buy the park out from under him!

Abbott family values.
The Abbotts continued to bring the drama with Ashley calling a board meeting to oust Jack. The pair made the rounds in Genoa City campaigning for votes ‘speed-dating’ style, then Jack pulled a fast one by appointing Phyllis to the board. The ensuing boardroom scenes were both amusing and tense, and in the end, the joke was on Jack when his own son, Kyle, cast the vote that unseated him from afar. Throughout, there were mini-dramas such as Ashley’s ‘breaking up’ with Ravi, but the end result, Jack informing Ashley she could not serve as CEO because she’s not a blood Abbott was a shock and awe soap moment. So, uh, Merry Christmas…wow!

The more things change…
The theme with Cane being too busy to connect with Lily continued this week as Lily found herself dealing with Hilary, who knew more about the latest in Cane’s life than she did. I was glad they addressed Hilary’s manipulation of Juliet with an acknowledgement/apology as it was a bit of an ‘elephant in the room’ with this new friendship between her and Cane. Hilary is certainly enamored of Sam, and as I said previously, in soaps this usually signals to viewers that she’s ready for a family of her own. I have a feeling we’ll see more of that theme coming up, and with that near-miss under the mistletoe with Devon they’re certainly teasing a reunion. As for the Ashbys, the bit with Charlie playing matchmaker and the mixed up feelings involved in a family spending the holiday apart felt authentic. That realism extended to Billy and Phyllis, who attended different dysfunctional dinners before reconnecting at home and resolving not to let Jack and Ashley’s issues mess them up…which could become more challenging very soon.

This blog expresses an opinion. Please share your views in the comment section below. Happy Holidays to you and yours!