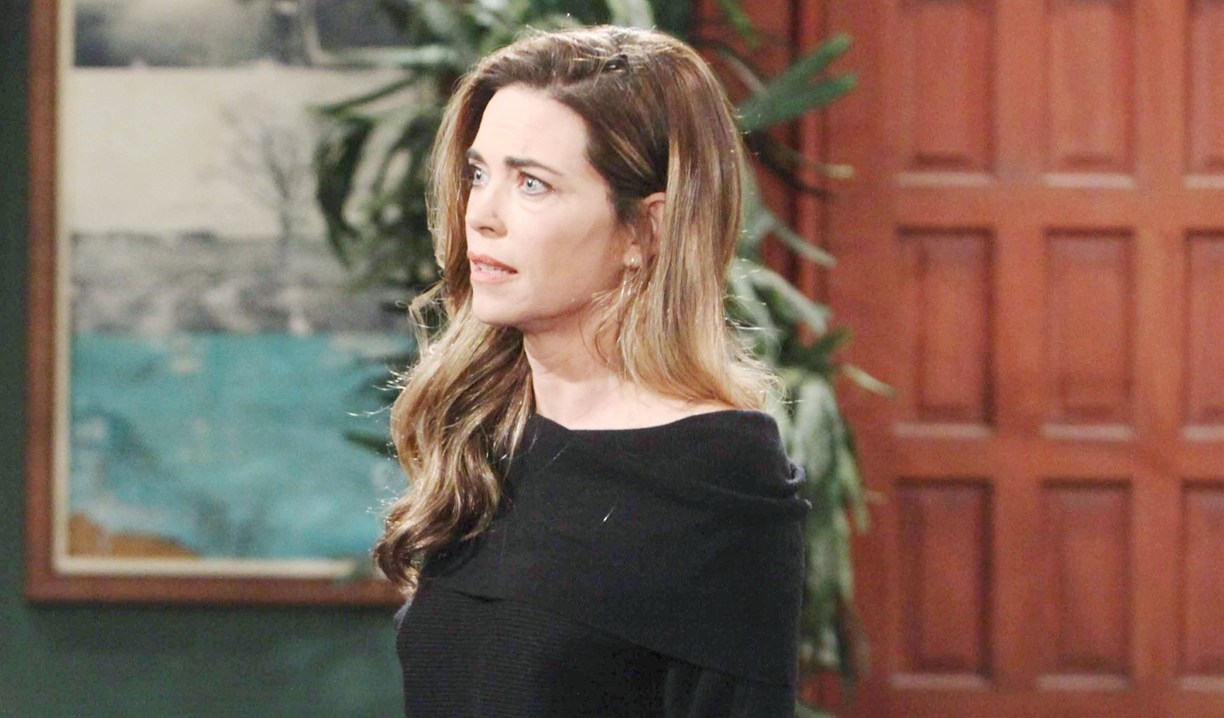 I’m still enjoying “Y&R” more than during Sussman’s tenure, but there have been a few not-so-appealing developments. One is the show’s pace, which has become so frenetic at times one could get whiplash trying to follow a character jumping from scene-to-scene. We’ve gone from Sussman’s glacial pacing to the other extreme, when the sweet spot for this particular soap is likely to be found somewhere in between. Also, there’s been build-up up to scenarios that end up taking place offscreen, and cliffhangers not being picked up in the next episode. Many would have liked to have seen what happened after JT walked into Victor’s office, or after Billy came face-to-face with JT at Victoria’s house. Thoughts:

Caught.
In the last Deconstructing Y&R, fans were divided over Scott’s triangle, but the way Scott is conducting himself has made him less appealing. Sure it was fun for Faith to get an eyeful of him kissing Abby and wonder what she’d do with the information, but really, the guy couldn’t stop himself from doing that in a public place when he’d just moved in with Sharon? Abby, who actually needed a storyline to make her a little more likeable, is involved with yet another unavailable man, whining and stomping off, and Sharon’s being duped…so it’s unclear what we’re supposed to be rooting for, except maybe some drama when Sharon finds out the truth.

I want to see Sharon put Scott's things out she could take them to Abby's and toss them on the lawn.#YR

Additionally, while it made for a good episode-ender when Mariah threatened Scott, I don’t buy for a minute that she wouldn’t tell Sharon what she knows.

Taking care of business.
I was enjoying the realistic drama surrounding Lily being torn about her feelings for Cane, but it seemed a little less believable for her to make overtures and him to be too busy. Also, Cane issuing a warning to Victoria about those who kicked him when he was down was a little surprising. He may not have sexually harassed Juliet, but he did set-up Billy, which compromised Victoria’s company, and lied repeatedly to Lily, so maybe meet in the middle and call it even?

Hey buddy.
The scenes with Phyllis and Billy remain fun and filled with chemistry, but that underlying theme of Billy being immature, reckless, a bad influence, or whatever, continued and it’s irksome after him being depicted as earnest with regard to career goals at Brash & Sassy. He should go back to Jabot and create an opportunity for himself while Jack’s focus is compromised – would lead to drama later. In related, Billy apparently made leaps forward in repairing his relationship with Vikki, who is now his buddy and inviting him and Phyllis over to make cookies…and it all happened off screen.

Hellstrom hype.
It’s definitely exciting to see the return of a former well-known character like JT. Here’s hoping the hype surrounding JT’s return turns out to be warranted. So far so good, as the moment JT walked into Victor’s office was kind of electric, the chemistry is there with Victoria, the face-to-face with Billy was tension-laden, and despite his cheery family update, there are issues with Reed. A few viewers also noticed he was a bit ‘drinky’ at Vikki’s. Hmm.

#YR JT sure seems to be swinging back that glass of wine, eh?

What’s also been fun is seeing JT bump into people he knew before, and reminiscing about memories from the past, such as his days with Colleen and Brad.

Holiday invitations.
I do enjoy Hilary and Jack’s candid friendship, and now business partnership. It could be quite the holiday with Hilary joining Dina and the Abbotts, hehe. Devon also issued an invitation to Hilary, complete with a significant backward glance when she politely declined. While some may disagree, I like the slow, tentative approach to them possibly reuniting, as given their tumultuous history, it’s realistic. Also it creates build-up. Jack’s mention that Hilary looked comfortable holding a baby no doubt had many thinking that Devon would make a good dad.

Park it.
So, Chancellor Park was snapped up by an anonymous bidder. I’ve seen a few suggestions as to who it might be…Billy (after his conversation with Nick), Jill, who is due to return, but maybe it was Nikki, trying to ‘beat Victor at his own game’ by outbidding him with the money she stole from his account. Good times!

This blog represents an opinion. Please feel free to express your views in the comment section below.