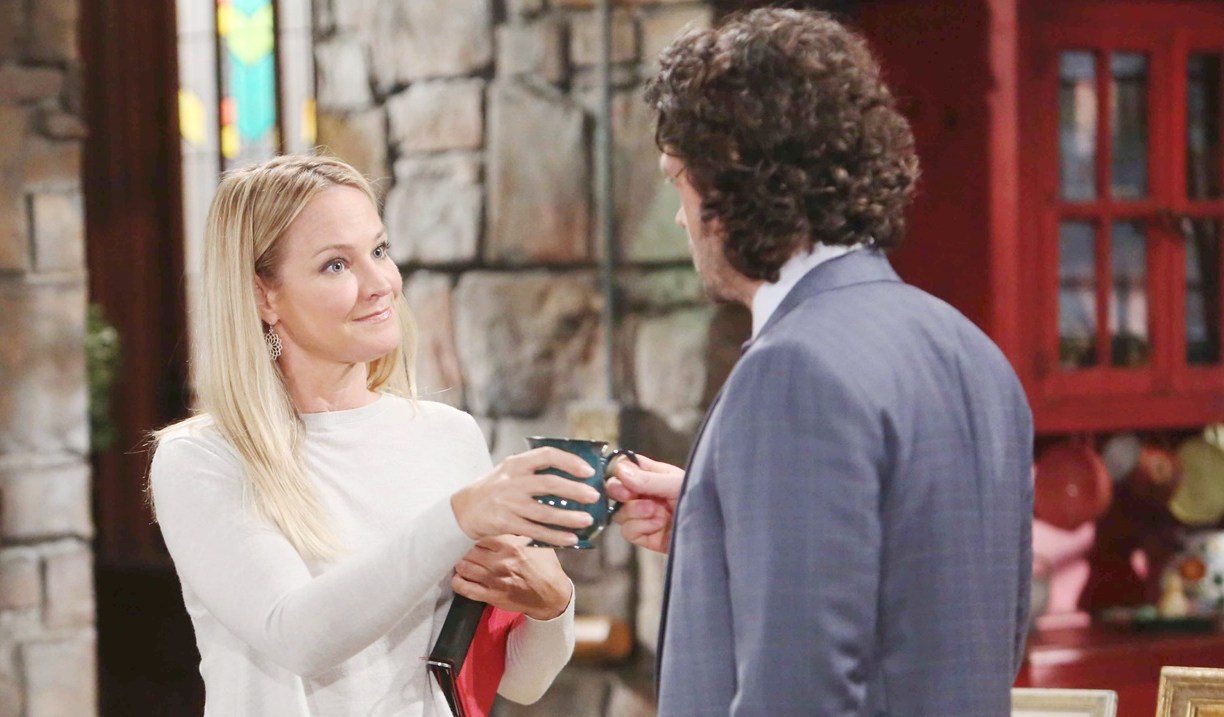 The family and business drama, threaded through with comedic bits, was solid again this week. Direction for some characters still seems confusing, and although the storytelling has been more interesting, it’s been compromised here and there due to the ‘every episode is a day’ pace, which forces a choice to be made in what beats will be played onscreen. Unfortunately, that choice doesn’t always prove to be popular, as many would have gladly given up the Nick and Chelsea Christmas ornament scenes, for example, in order to see something else. Thoughts:

Confusion.
In the last Deconstructing Y&R, being exposed by Jordan seemed like a turning point for Hilary, and possibly Hilary and Devon, and although people don’t change overnight, it would have been a nod to what she’d gone through if she’d struggled with having to expose Tessa on air so soon after her own awful experience. Suddenly she was back in ‘mean girl’ mode as though her epiphany never happened, and when she committed to toning down her show again, it wasn’t because of her feelings, but because Jack insisted. It sometimes feels like there is more than one person writing for the character, and they can’t agree on who she is, or what direction she’s going.

I'm just honestly not a fan of this writing for Hilary. Rinse wash repeat – she airs people's dirty laundry, they yell at her, she feels some remorse looking like she wants friends/Devon and then stirs it up again on the show. Lets change it up #YR

Similarly, they need to establish what they’re doing with Devon, who still wavers on the sidelines doing ‘whatever’ – a corporate CEO going to someone’s house to oversee a photo shoot?

Singing the blues.
Tessa refused Victor’s offer of $100,000 to leave town (much to the chagrin of those who haven’t connected with the character), and clung to her relationship with Noah. In a possible attempt to have us root for the underdog, Tessa informed Nikki that she and Victor both owed her, but considering it was Tessa who broke into their safe and stole their gun, which linked them to a murder, I really didn’t get her logic. She expects to be rewarded for refusing to wear a wire to implicate Victor in something he – for once – wasn’t guilty of anyway? Tessa then accused Mariah of giving her arrest details to Hilary, when it was actually Devon, who went on some spiel about the number of downloads of her song and…Zzz.

Philly fun.
While it’s fun to watch Billy and Phyllis revel in their rekindled romance, I’m hoping the playing hooky, and Billy buying a racehorse (gambling), isn’t going to lead to a narrative that they should be with other (more boring) partners that ‘ground’ them. Why can’t a playful, spontaneous couple also be serious and better one another? Michael and Lauren were written that way and it was amazing.

Baby steps.
While the Cane and Lily stuff is predictable in the sense that it’s completely obvious they’re heading the reconciliation route, there are beats being played along the way with the family that make it feel realistic. Charlie, usually the broody one, showed surprising emotion and protectiveness where the baby was concerned, and his scenes reconnecting with Cane were heartwarming, whereas Mattie was resistant. Lily admits she misses Cane, yet still pulls back whenever they get too close or the situation feels too much. In related commentary, Mattie and Reed remain adorable.

Clash of the siblings.
The Abbott drama continued on both fronts – at home and at work – and it was interesting how Jack and Ashley are both terribly upset about Dina’s diagnosis but dealing with it differently, which actually led to them taking out their frustration and pent up feelings on one another. While Jack turned his focus to Dina and away from work, Ashley did the opposite, and in the inevitable clash some truly stinging barbs were exchanged. Raw, painful stuff. Speaking of which, I was glad Jack clarified that the Alzheimer’s wasn’t solely to blame for Dina’s verbal attack on Hilary. In more related commentary, I loved the bit with Ravi becoming fed up with Ashley putting her walls up and defecting to Newman and Victoria. They’ve a bit of chemistry between them too, so it could be fun to see this play out. Also, Gloria’s loyalty to Jack has made for some gold moments in scenes at Jabot…her expressions and interactions are so entertaining. I laughed out loud when Gloria marched Dina back from the lab with two fistfuls of test tubes protesting that she was protecting John’s legacy from the ‘spy’ Gloria. Dina and Ashley’s outing was everything…from the reconnecting to the hilarious pole-dancing remark, to the heartbreaking moment when Ashley realized Dina couldn’t remember. The Abbott family ‘dramedy’ is a gift that keeps on giving.

Not exactly a Hallmark moment.
Despite no one seeming particularly interested in hearing Abby’s ‘demands’ for her return, she’s back at Newman Enterprises, where she mainly has run-ins with Scott. While some fans see potential for Scott and Abby, it’s not exactly a foundation for a swoon-worthy romance – Abby would be taking another woman’s man yet again, and Scott’s behaving like a sleaze, moving in with Sharon while telling Abby he still wants to have sex with her. Not cute! Fans are divided:

Also noted in this storyline…not very subtle hints that a Sharon/Nick reunion isn’t out of the question.

Bite the bullet.
Over at the penthouse, Chelsea agonized over Victor’s threat to tell Nick about Christian’s paternity. Clearly Victor’s salivating over the idea, so if Chelsea were smart, she’d just tell Nick herself and get it over with. It would certainly be the most interesting thing to happen over there since Nick moved in. In other news, Nick’s going to take on Victor/Victoria/Newman Enterprises in a David & Goliath story about saving Katherine’s park. Not a bad story idea, but I feel Victor would never touch Katherine’s memorial park and neither would Victoria, so there’s that.

Deconstructing Y&R: A Foursome, a...