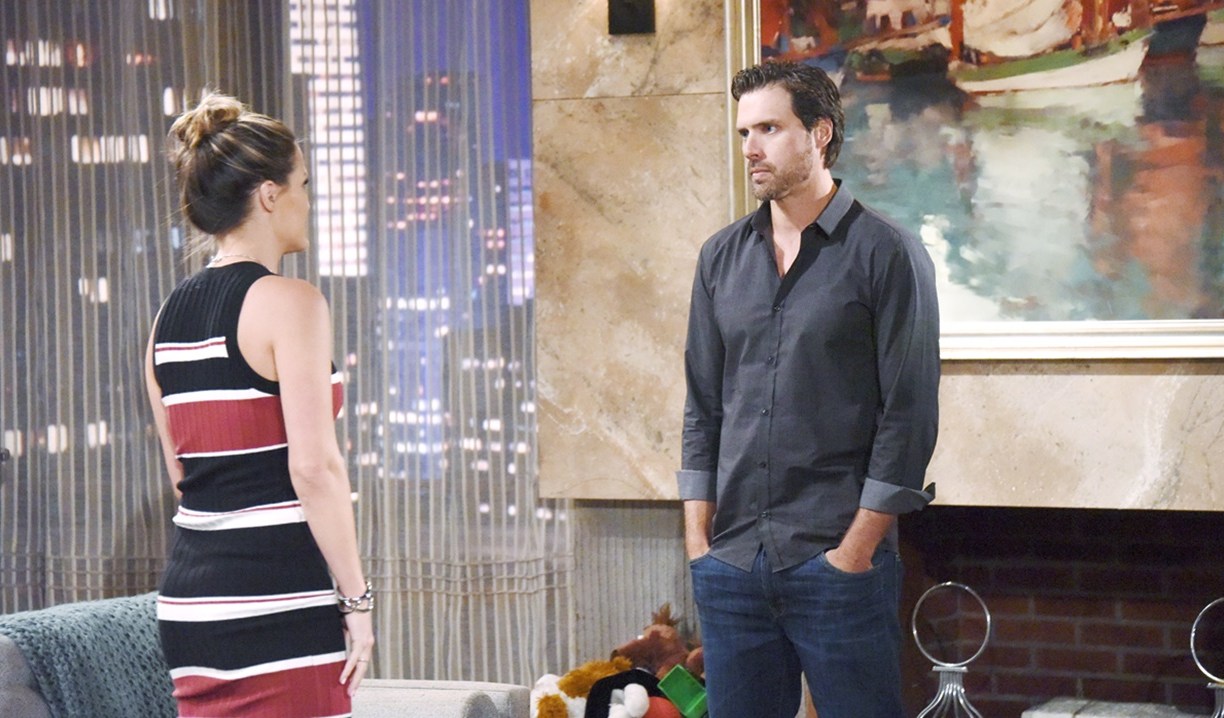 As noted in the last Deconstructing Y&R, the comedy is saving the day. From Abby remarking that Scott’s shaven face was now silky smooth for kissing Victor’s butt, to Benjamin Hochman retorting that Victoria couldn’t get enough of ‘The Hoch’, more often than not the one-liners have been the highlight, as the drama is still lacking. Take Thursday for example; it felt like there were 1,000 scenes jumping from Jabot, to Brash & Sassy, to the Athletic Club, to the cabin, etc. One would think there would be all kinds of drama to report from such an episode, but the takeaway was basically ‘Jack raised Brash & Sassy’s rent’. Is it any wonder people aren’t tuning in? Thoughts:

Independence day.
I tried to appreciate the intensity of Victor ‘cutting the strings’ with Nicholas, but it was really just more of Nick whining and Victor doing his usual controlling thing. This could be an attempt at making Nick the ‘rebel son’ now that Adam’s gone, which isn’t going to fly. Anyway, Nick left the tackhouse and made the rounds bragging about his new era of independence…which involved pressuring Chelsea to let him move in with her. Ack.

Moving day.
Abby’s definitely had a few good one-liners in her bickering scenes with Scott, but I wish they’d relax on the ‘forced’ sniping a bit, as it’s headache-inducing and distracts from whether they actually share chemistry. In related developments, Abby, who already has her own home – Brad’s house – was handed the keys to Nick’s former abode and invited to move in. Gee, I wonder if she will run into Scott more often, since he stays at Sharon’s place, and if they’ll eventually have sex in the tackhouse?

Civility and secrets.
In the land of Cane and Lily’s split, everyone is being quite civil, with the anger being kept at ‘snipping and snarking’ levels. I miss Lily’s temper. There was a time when she’d yell at the twins for running through the Club dining room more fiercely than she has hollered at Cane or Juliet since all of this has gone down. The emotional beats have been on the money, but if you’re going to tear apart a long-term couple there should be bigger drama involved. In related story, they had Cane trying to make deals to sell Brash & Sassy’s ‘secrets’ because he’s bitter. Um, what possible earth-shattering secrets could a company with five employees, a teeny lab, and one office have? It’s not like they were wildly successful – they couldn’t even weather one lawsuit that didn’t go public. And don’t get me started on Billy making nice with Victor, or Victoria not being able to get a loan – she has enough money to bail herself out! Why are they trying to convince us everyone is going broke? Ack. At least Victoria’s been allowed to be over-the-top, even if it has to be explained by a head injury. Her fight with Hochman was good soapy fun; as was Hilary’s reaction to getting it on tape.

All fudged-up.
In the Abbott world, Ashley finally had sex with Ravi, a situation that was botched and dragged on to the point where few cared…and it happened off screen. Oy. Back at Jabot, Ash learned that Jack raised the rent on Brash & Sassy (gasp) and warned him they’d probably dig in and fight – to stay in the competition’s building – knowing Jack’s actively working to bring them down. Alrighty then. Meanwhile, Billy worked his wiles on Dina, and there’s no telling where that might lead (enjoyable scenes). Jack and Ashley also discussed Dina’s fudged-up figures, perhaps bringing them closer to discovering the truth of her condition, which was a plus.

Back to basics.
Tessa’s background story came out after she admitted to Mariah that Crystal was her younger sister. Her story is sad, but I still don’t feel the necessary connection with Tessa to be super drawn in. It doesn’t help that the sex trafficking story feels pretty basic, from the cliché characters to Scott swooping in to help Sharon.

In a word…
While there seems to be a lot going on in Genoa City, the lack of truly gripping, hard-hitting drama combined with a high predictability factor, and characters with dialed-down personalities continues to create issues for viewers, who are being tempted to tune out in their frustration:

Friday notes.
Again, the comedic lines and reactions were the highlight. Overall, it was another episode quite centered on Victoria, which is fine with some but others are tired of the heavy focus on her and her company. A lot was happening, but still there was no high stakes drama unless you consider the future of Brash & Sassy a huge deal. Mattie and Reed were very cute, Hochman raving to Phyllis about Victoria being wild in bed was hilarious, Neil giving Victoria her funding was a nice throwback to their history (though that snap decision may come back to bite him), and the reactions to Hilary’s exclusive made for an entertaining end to the episode. Graham/Dina covering her mistakes will drag out the reveal of her condition, and Dina’s opinion on Billy’s love life wasn’t surprising. Jordan kissed Lily after some fairly predictable dialogue but I didn’t see/feel any real fireworks. Anyone else?