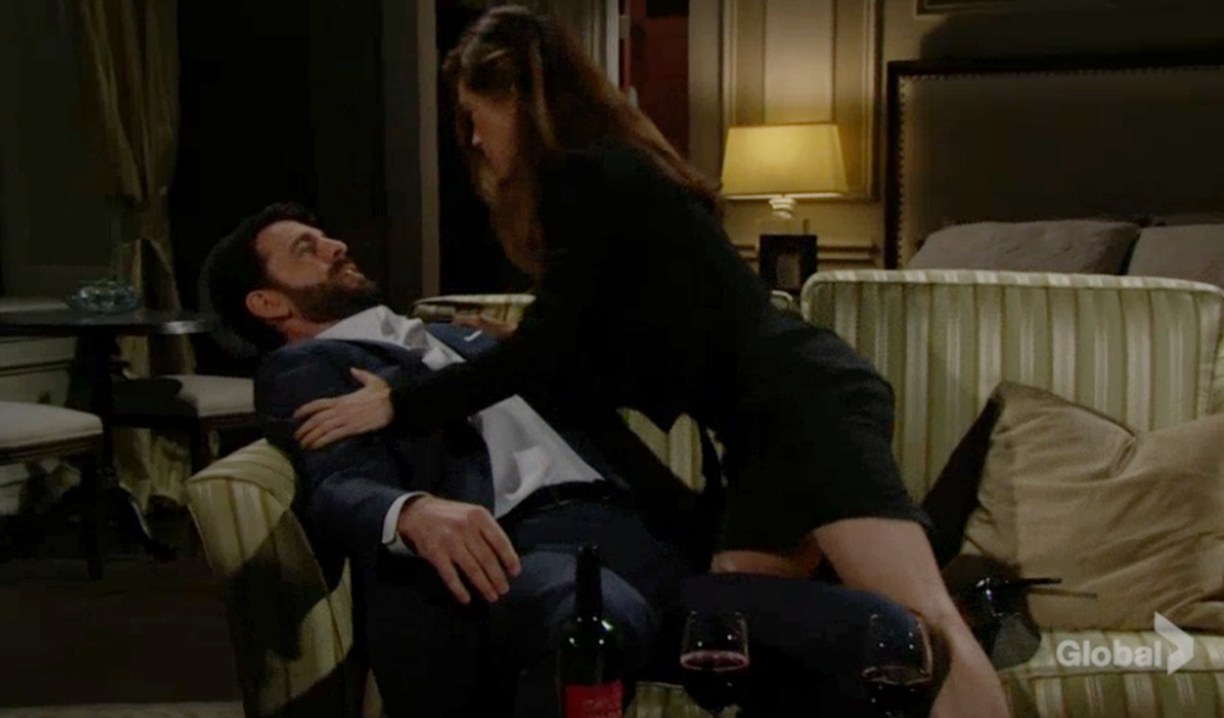 While “Y&R’s” overall tone continued to be subdued, the Cane/Lily split had emotional impact, and there were new developments near week’s end that definitely had fans reacting. Thoughts:

Pack your bags and go.
As predicted in the last Deconstructing Y&R, Lily reached the end of her rope with Cane after it came out that he conspired with Jesse to set up Billy, and paid him to keep quiet with the kids’ school money. When it came out that he’d slept with Juliet, it was the lying that upset everyone most, and again, it seemed like the covering up and humiliation was what hurt Lily the most. When she threw him out, his regret and her pain were palpable, and really had viewers ‘feeling’ one way or another, which is truly soapy goodness.

This is the BEST Lily & Cane have been written since I've been watching #yr..I felt that last scene, yep I did!

When Cane left, I wanted to hug him, one lie only leads to another & then he was in to deep. It was very believable, poor Lily #Lane #YR

Another solid beat played was the twins supporting Lily. Of course they were fresh off a run-in with Juliet, who got a first-hand look at the fallout from her lawsuit. I don’t know what we’re supposed to think about Juliet now. Considering the pains taken to depict her as a sincere and decent person, it felt ‘off’ that she went through with the sexual harassment allegations – like they wrote out her integrity for that period of time to enable the plot point.

Abbott power.
Ashley is brilliant when dealing with the likes of Benjamin Hochman, but is fixating on her mother lately and has no life of her own. As happy as we were to hear Dina would be sticking around, it now seems they’re not sure what to do with her either. These women have shared some notable scenes ‘connecting’ and opening up, but I’d love to see these Abbott women in worthy storylines shaking things up, making power moves, and in Ashley’s case, bedding men on her own terms.

Sister, sister.
It was refreshing to see Abby be strong for Victoria, which made for a touching scene, and also for her to stand up for herself when Vikki confronted her about sharing her concerns with Victor. Abby’s insecurities are too often the focus; she’s constantly seeking reassurances from family members and now seems to be a target for the manipulative and sleazy Zach.

Been there, done that.
Given that they agreed to disagree years ago, the whole Nick and Victor feud isn’t anything viewers are getting particularly wound up about. Even Victoria shrugged it off and told Chelsea, “They’ve been here before.”

Sex ring intrigue.
I’m happy to see Sharon in a storyline that makes sense for her character, though I’m not a fan of the ‘PSA as dialogue’ portions. It will be interesting to see where they’re going with Crystal and the sex trafficking ring, and who else will prove to be connected to it. It was also appreciated that they managed to squeeze Paul and Lauren into the scenario at the coffeehouse. It made me laugh when Paul compared Lauren to his mother. Hehe.

Unapologetically herself.
As usual, it’s unclear exactly where they were coming from with Hilary wanting the commercial that Lily auditioned for, but regardless of her motivation, at least she stood up for herself to Jordan.

The heart wants what it wants.
Well, Devon, Noah, Mariah, and Tessa went off on their trip to San Francisco, and despite the speculation that Mariah and Tessa might have feelings for one another, most didn’t expect them to kiss so soon. The chemistry was definitely there, and Mariah’s expression conveyed a myriad of emotions as she tentatively but determinedly acted on her feelings. Some feel her curiosity/attraction for a female is out-of-the-blue, but it could explain the bad sex with Kevin and lack of sizzle with Devon, so there’s that. Anyway, the kiss left some viewers vowing to tune out, and the rest wondering how this would play out moving forward, as it’s a complicated situation for the characters involved with loads of potential fallout.

Friday notes.
Mariah spun-out after kissing Tessa, partly due to Tessa’s reaction. It seems Tessa is attracted to Mariah, but maybe wants to hang onto Noah for less-than-admirable reasons. It was uncomfortable when Tessa used the Newman name to get them into the all-access area, and also when Mariah overcompensated for her confusion by telling Devon she loves him…. Jack and Nikki’s conversation about ‘poking the tiger’ was definitely foreshadow-y. Jack cooking up his not-so-impressive catch was cute… Victor cut Nick out of the Club’s family membership and he had to borrow cash from Sharon. Hysterical, but I loathed the bit with Scott calling up Victor to chuckle over it. Dead father or not, it simply doesn’t fit that Scott would become enamored of a man like Victor. I prefer to imagine he’s getting close to him to discover his secrets and expose him… While it’s great to see Phyllis scheming again, it’s a bummer why she felt the need to do it. Billy showed up for her at home, but only because Victoria was busy? Meh. Loved the surprise ending with Victoria and smarmy Hochman. Although it signals her head-injury related issues are going to be quite a concern, the expression on Hochman’s face when she jumped his bones left me giggling…good stuff.