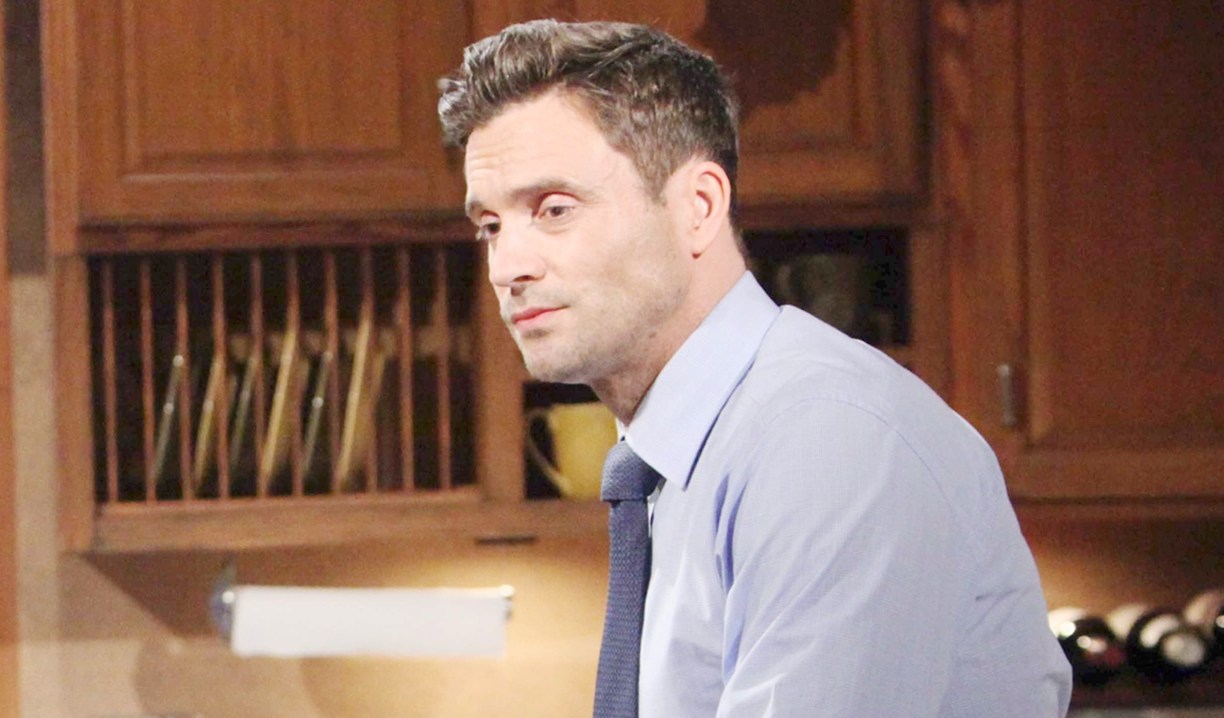 The goings-on in Genoa City provided a little fuel for frustration this week, and the drama remained low-key. Thoughts:

Family feud.
Disowned or not, Nick dragging around town moaning about his father is nothing particularly new, and is about as interesting as his romance with Chelsea. Victoria’s sudden turnaround, wanting Nikki back with Victor, and the family to reconcile, seemed odd considering her conviction to make the Mustache an outcast was so strong that she supposedly sacrificed a reconciliation with Billy to accomplish it. Was the change due to her bump on the head? Who knows? A significant medical crisis seemed in the cards, only to have Vikki’s scans come back normal and a day-player doctor lecture her about eating right.

Tired triangle.
The trend to make Philly’s relationship look superficial next to Villy’s continued with Billy sidelining Phyllis in favor of jumping to Victoria’s aid, which is getting repetitive and thus, tiresome. Acknowledging that Phyllis and Billy connected on a deeper level, with attraction developing as a result, might have given this triangle more depth, angst, and appeal. In any case, this situation has done all three characters a disservice as Phyllis remains a shadow of her former self, Billy is a fickle, irritable ass much of the time, and Victoria swans around in a perpetually uptight semi-exhausted state. Her hard won company is now two employees housed in the competition’s building, and there’s a fixation with her behaving ‘just like her father’, which is eagerly and repeatedly pointed out in dialogue. Meh. That said, Victoria’s run-in with Cane was entertaining given it’s, ahem, very candid nature and the genuine tension that leapt off screen.

Abbott mysteries.
Although it made for a cute scene, it’s anyone’s guess why Ashley and Abby would be fazed by Dina’s admission that she enjoys younger men – seems like a foregone conclusion, hehe. Ashley and Jack’s dinner with Dina and Graham ended with Ash deciding that her mother must be depressed. Um, Dina gave up her company even though she clearly wishes she didn’t have to, has the need for a constant companion, and is having one memory lapse after another – wouldn’t it be more apt to suspect dementia or Alzheimer’s? Ravi has reappeared to help Ashley figure this out, which fed the ongoing confusion about his purpose on the canvas after the writers failed to capitalize on their sexual tension in the beginning, and then spent weeks/months on a burgeoning relationship, only to end up ignoring it.

Broke and tired.
The Winters clan continued to face drama as Neil and Devon elected not to ‘go there’ and hire Cane, Charlie questioned Lily downplaying Cane’s betrayal, and Cane lost out on another job prospect because Jack wants back in Nikki’s bed. Oops. The new running theme of ‘how will Lily and Cane put food on the table now that he’s unemployed’ truly bugs me. Please. The two of them have been raking in big bucks for eons, and it’s not like they live in a mansion with a lavish lifestyle. It just makes no sense, and is clearly a set-up for Cane to have to go to extreme lengths to pay off his blackmailer who conveniently reappeared. Perhaps this will prove to be the last straw for Lily? Finally? In related, Lily filmed an audition at GC Buzz and Hilary decided to undermine her. While I enjoy their scenes/rivalry because the actresses play it so well, trotting Hilary out to be the mean girl at every turn feels played out, particularly when there’s been little exposition of motives. Incidentally, Hilary took a tongue-lashing from Sharon, and while it’s understandable she would take issue with someone her daughter dislikes, Sharon’s ire over Hil airing the Newman dirt was pushing it for some.

SHARON SHOULD NOT be loyal to the Newmans. They bullied her for years & shamed her for mental illness. This is disgusting #YR pic.twitter.com/nZ16fT5eZT

Hilary is now under the bus Sharon was under for years. Now the writers have Sharon joining in bashing Hilary? Not here for it ? #YR

In a more encouraging turn of events, Sharon was drawn into the storyline of the sex ring, which will give her more to do than pour coffee.

Festival fun.
As mentioned in the last Deconstructing Y&R, Tessa’s close encounter with Mariah had fans fired up, and so it was interesting to see if there would be ‘follow-up’ this week. With Mariah and Tessa planning to ditch their beaus at the festival to explore together, and downplaying Noah and Devon’s respective romantic intentions for the trip while watching each other across the Underground, it seems they’re going there, unless it’s a tease.

Friday notes.
Cane’s troubles worsened as he contemplated pillaging the twins’ school savings account to pay off Jesse. Meanwhile, his issues propelled Lily to spend more time confiding in Jordan, and caused friction between Mattie and her first boyfriend. Worse, by episode’s end, Cane still hadn’t paid up, so Jesse was offering up the info on the footage to none other than Billy, for a price. It will be interesting to see which way this will go – will Billy get the information and expose Cane before Cane uses the twins’ college money, or will Cane use the money and wind up exposed when Lily finds out the money’s gone and freaks out? Hmm… It was nice to see Paul in some scenes with Sharon as they discussed the grave realities of sex rings… Devon and Neil set up an office – in the Club of course – all the better for run-ins between Devon and Hilary… Anvils were dropping that Nick will put his money into this expansion against his initial instincts and go broke. Of course he can blame Victor, because as Chelsea and Sharon both pointed out, the altercation in the parking garage is what drove Nick to be so reckless… So, Mariah and Tessa definitely have a thing for one another, which should really shake things up. Can’t wait to see what happens on the trip.