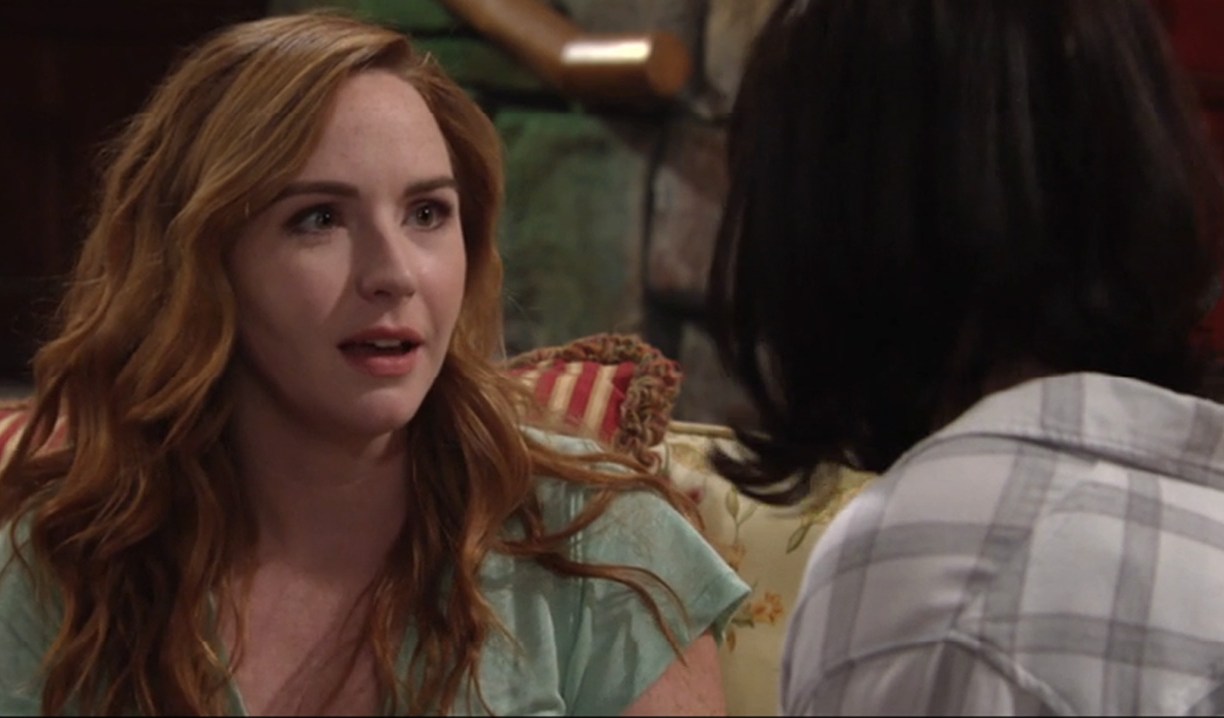 The piano recital may have fallen short on explosive drama, but it led to plenty of fallout stemming from the elegant (and sometimes violent) after-party, and in a surprise turn of events, the two characters who had tongues wagging this week were Mariah and Tessa. Thoughts:

The magic words.
As mentioned in the last Deconstructing Y&R, Kevin and Chloe’s exit storyline seemed never-ending, but it appears to have concluded with them going off into the sunset for their happy ending with Victor’s blessing. The Victor loose end was tied up neatly when Kevin bluntly told him he had no interest in ruining his life, and would do anything to protect his family and keep them together. Bingo! Words the Mustache could relate to and appreciate. I was good with the ending, as well as the fact it left open the possibility for returns.

Concert consequences.
Nikki fled her own after-party and spent the night at the Abbott cabin with Jack, who notably is dipping his toes in hypocritical waters by dallying with a married woman. Of course she returned to the ranch only to split with Victor in some very tense, emotional scenes. While I’m quite enjoying Jack and Nikki at the moment, we all know how this ends historically, which does take away from it. In other news, Jack had to face the music with Dina, who slapped him for abandoning her at the post-concert shindig. Thankfully, he pointed out he knew what abandonment felt like thanks to her, but in the bigger picture, the uncharacteristic slap was only one of a growing number of signs that Dina may have dementia or Alzheimer’s.

In other Newman fallout, Victor disowned Nick for behaving, as Nikki pointed out, just like him. Victoria, meanwhile, has been having neurological issues since Abby caused her to fall, which may lead to Billy being by her side as she battles medical troubles. Note the timing comes just as Victoria seemed to be more accepting of Billy and Phyllis, and was fine about her ‘meeting’ the kids, who, by the way, were her niece and nephew when she was married to Jack. Apparently kids and teens in Genoa City live in bubbles. Over at Newman Enterprises, Scott and Abby seemed to form a truce, and Scott reassured Victor of his loyalty. I have to say that Scott seemed different, so it’s disappointing to see him kissing Victor’s butt.

More: Y&R’s Eric Braeden among the silver foxes of soaps

The missing link.
In Cane’s world, he had a run-in with Juliet and with Billy, all while dealing with the disapproval of his children and not knowing what would become of his marriage. It was a week of various people asking Lily whether she’d forgive him, and of her not answering. It looks like she’ll make a go of it, but once the bit comes out about Cane setting all this into motion by setting Billy up via the edited video footage, all bets will be off.

Trading places.
It’s no secret to viewers that Devon is still carrying a torch for his ex-wife, and Mariah could no longer deny what she was seeing either. Though she expressed confidence in her relationship to Hilary, and Devon convinced her to stay with him, the writing is on the wall. In related news, Mariah cried her eyes out to none other than her new bestie, Tessa, who definitely looked as though she wanted to take things out of the friend zone just before Devon and Noah arrived at the door. Count me in. This is an opportunity for these characters and the show, not to mention the delicious possible ramifications of Mariah and Tessa getting together considering Noah and Mariah are half-siblings and Tessa works for Devon. Though the idea of a gay pairing is controversial for some, others are concerned the writers won’t follow through. In the meantime, enthusiastic viewers scrambled to come up with ‘ship’ names for Tessa and Mariah:

Devon is in denial..let her go dude. Summer of #Messa is in full effect! #YR

Tessa and Mariah scene, they got so much chemistry. #YR #Teriah

Camryn Grimes joined in the fun on Twitter, posting a poll and tagging Cait Fairbanks:

Friday notes.
It was confirmed Lily would stay with Cane, but this is likely the calm before the next storm… I’m all for Phyllis scheming again as it’s more true to character than her being so consistently pleasant and accommodating. She could be on thin ice if Jack messes with Victoria’s Brash & Sassy and Billy finds out she knew his plans… Though it’s understandable she doesn’t want to feel caught between Victor and Jack, Abby still gets the ‘Hypocrite of the Week’ nod for lecturing Jack about kissing Nikki considering her history with Austin and Stitch… Victoria’s neurological problems worsened and she was snapping on people, so they’re definitely going the medical crisis route, and that left some rankled about the amount of time this character’s been on the front-burner compared to other longtime GC residents.