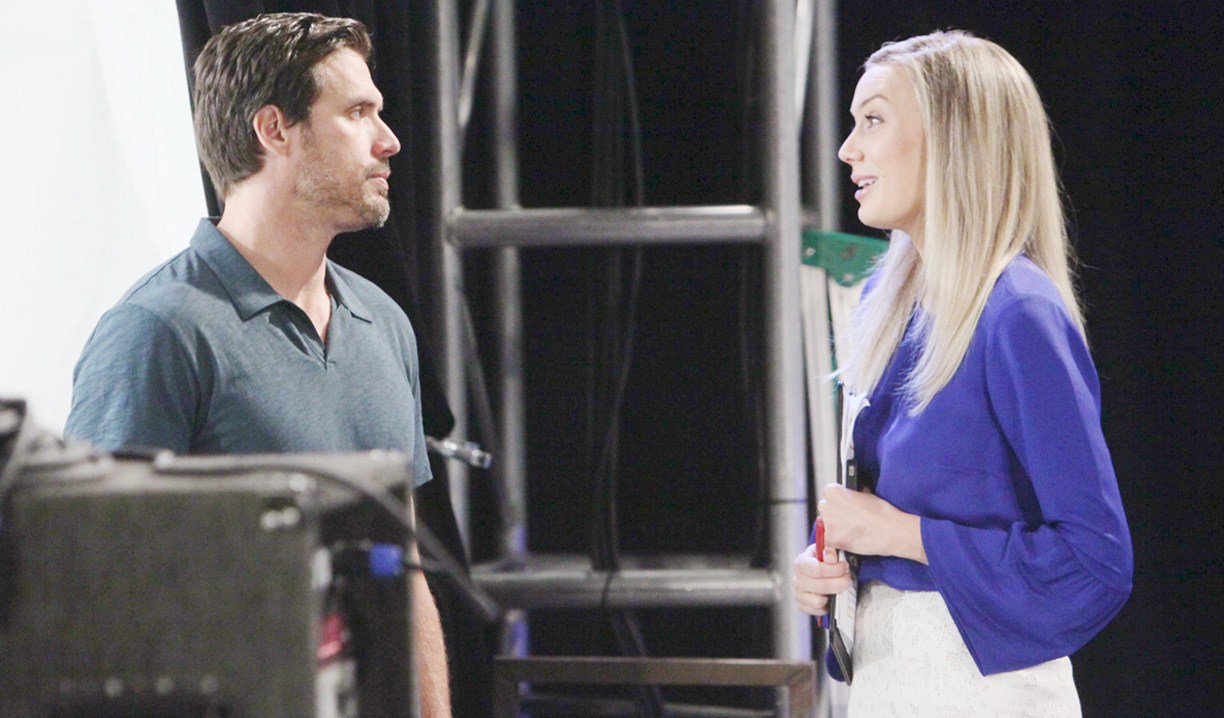 Some frustrated “Y&R” viewers were still waiting for a boost in the drama department as this week’s big storyline centered on a charity piano recital, though there was plenty of controversy provided by Lily and Cane’s ongoing situation. Thoughts:

Kevin’s tearful farewell…but wait.
Kevin had another round of goodbyes, but it was Gloria and her son’s farewell that brought me to tears. Once again, it seemed we had seen the last of Mr. Fisher, so it was surprising to see him appear again in a motel room with Chloe worrying about Harris and Victor, and left me wondering how long exactly they’re going to drag this out for these characters.

Do me.
Loved the Phyllis and Billy poolside scenes as they continue to be sexy and fun, but there is still the need for a legit story here (and not a triangle). Why not get deeper into Billy’s issues with Jack, which go way back?

More: How sex in soaps has changed over the years

All wet.
As much as it’s admirable that they’ve acknowledged Nikki’s MS, centering a story on whether or not she’ll get through a piano recital she could simply have declined to perform at isn’t exactly riveting stuff – even with the added ‘intrigue’ of Nick sabotaging the soundboard, Abby sniping, Victor bribing, and Noah riding to the rescue. We felt for Nikki, and were quite at home with Victor’s unique, manipulative style of displaying his devotion, but for many, it was puzzling that this charity concert was offered up as a front-burner dramatic storyline.

Wow I am not n suspense. Will Nikki's hand move. I find out tomorrow ? #YR

I'm sorry Y&R. Trying to make me feel sorry for Nikki over her MS flare up over a piano recital that she's too dumb to say no to. pic.twitter.com/B06METT0WW

Some “Y&R” viewers entertained themselves by critiquing the gowns and jewelry, while others took to imagining their own twists in an attempt to liven things up:

Nikki's piano explodes like a prop from a Michael Bay movie. A part flies off & takes out one of Abby's eyes. ? #YR

The good news is that there was finally another splashy event in Genoa City, and the story did inspire some debate among fans about Nick’s actions. The triangle-y bit with Jack calling Nikki sweetheart before she ended up sharing a kiss with Victor, and the addition of Hilary’s interview and red carpet coverage rounded it out nicely – and Howard returned – loved that. Last but not least, Melody Thomas Scott was wonderful struggling with the pain.

You are the father.
It’s anyone’s guess whether Juliet is telling the truth, and Lily’s continuing ability to hold it together and put the children first (including Juliet’s) has been a source of pride for some and a source of frustration for others who, as mentioned in the last Deconstructing Y&R, hoped to see Lily lose it on Cane and/or Juliet. What the storyline may lack in bolder drama, it certainly makes up for in controversy, and Christel Khalil, Daniel Goddard, and Laur Allen have all done some amazing work with the material. In related, Jill also weighed in this week in her inimitable blunt way.

Friday notes.
The conclusion of the charity concert featured plenty of undercurrents and emotion, with more than a few brought to tears by Nikki and Victor. The ending with Nick and Victor arguing could very well lead to the exposure of the family’s secret after all the effort to keep it hidden. Elsewhere, Cane was forced to tell the twins that Juliet was pregnant with his child. In this case, Charlie’s anger was fitting. Given that they’re teens, it will be interesting to see if they act out as a result of this turmoil in their lives.