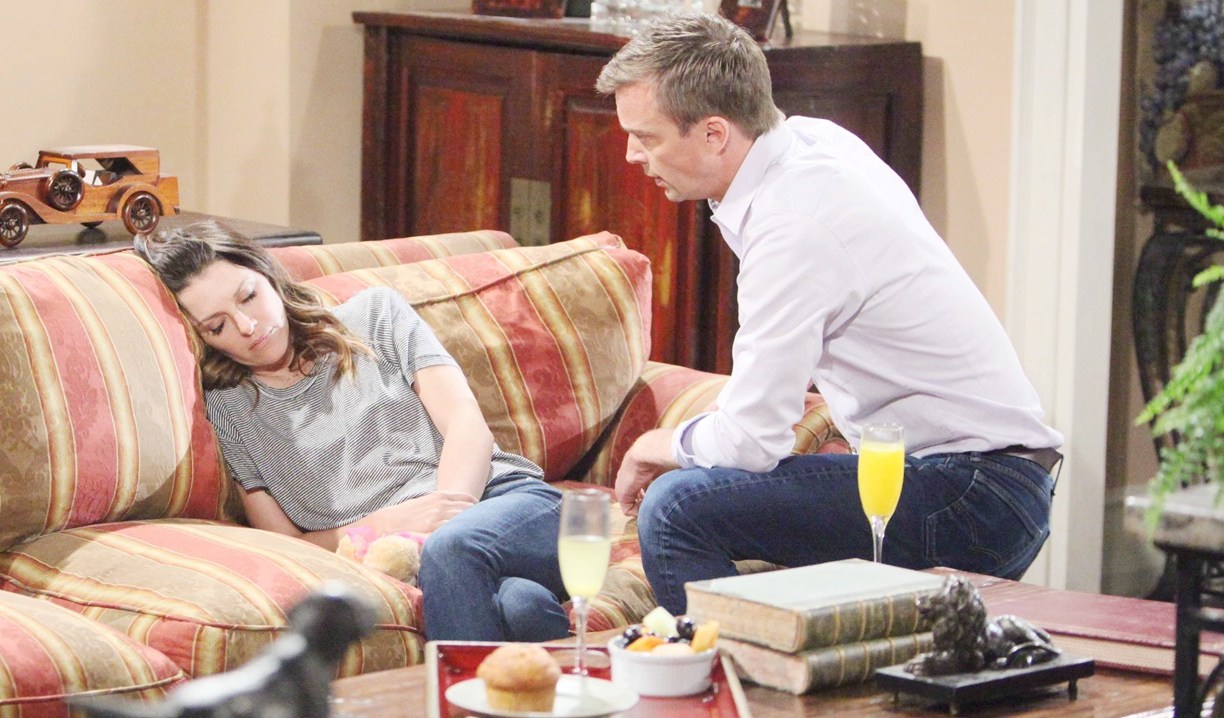 As mentioned in the last Deconstructing Y&R, the clashes between Jack/Victor and Dina/Jill upped the drama, and while we were looking forward to more, ahem, fireworks this week, there really wasn’t as much as hoped. Thoughts:

Fourth of July bash.
I found it odd that Neil and Devon’s party happened while Lily was in crisis and pretending things were fine to the twins, yet they didn’t question missing it. The celebration had its moments – Abby telling Devon she just didn’t ‘see’ him with Mariah, which made me giggle, Devon being distracted by Hilary, Nick’s delightfully awkward Neanderthal approach to Scott (much more interesting than anything he does with Chelsea) – but otherwise was a tad underwhelming. There was way too much time devoted to Mariah championing Tessa’s cause, when let’s face it, many thought Noah wanting to ‘slow things down’ with her meant the writers had seen the light as the character just hasn’t caught on.

Welcome to the creep show.
We weren’t sure if we’d seen the last of Kevin and Chloe or not, but their story was picked up again, and it was an eyebrow-raiser. Kevin suddenly decided he needed to get out, and Dr. Harris had his car all rigged with magic explosives designed to blow up after he left the house, but before he got to the airport. Once alone with Chloe, Harris went from zero to crazy in a nanosecond. And he wasn’t just a bit ‘off’ – he went from lucid to existing in a full-on psychotic trance in which Chloe was his dead daughter Maggie and her graduation ceremonies were taking place in his living room. What? Conveniently, the car explosion didn’t kill Kevin, it only made him stronger, and he showed up on the front porch sporting scorch marks, contusions, and a murderous disposition. He managed to tie and gag Harris and leave with Chloe before anyone in Mr. Rogers’ neighborhood called about hearing a gunshot. Just as Michael and Paul were panicking over Kevin’s whereabouts, he turned up in Esther’s parlor, red-faced and grinning as he announced he’d been to Oregon and would be relocating there with Bella. Hehe! Bizarre!

Cane and co.
The fallout continued for Cane and co. but aside from his firing, after which he threw a beaker at the wall, it’s all been a little understated drama-wise. Lily has just coasted, sort of in shock/limbo, with numerous scenes agonizing over what to do and how to tell the twins.

Lily should be going crazy like Olivia… she was passive & nice like Lily but that Barber fire came out. damn i miss the old days #YR pic.twitter.com/NCMNepgZU3

So far Lily isn't losing it with Cane. I don't know whether to be impressed or frustrated. Lol #YR

Meanwhile, Cane made his way over to see Juliet about a paternity test, where she was waxing eloquent to Hilary about what a great daddy he’d make. Hilary remains a question mark, as it’s unclear what she really feels/thinks about anything other than Devon – seems they just roll her in to be the ‘baddie’ when needed in this situation. In any case, Cane questioned Juliet as to whether this was one big scam, and some viewers suspect that Juliet and Jordan could be working together to split up the Ashbys. If anyone has taken the time to work out a theory on this, including their motives, please share!

Friday notes.
Aside from the emotional farewell between Kevin and Michael, and the gasp-y moment at the end when Bella blurted to Chelsea that they were going to see Mommy, this episode was next level boring. Just…disappointing.