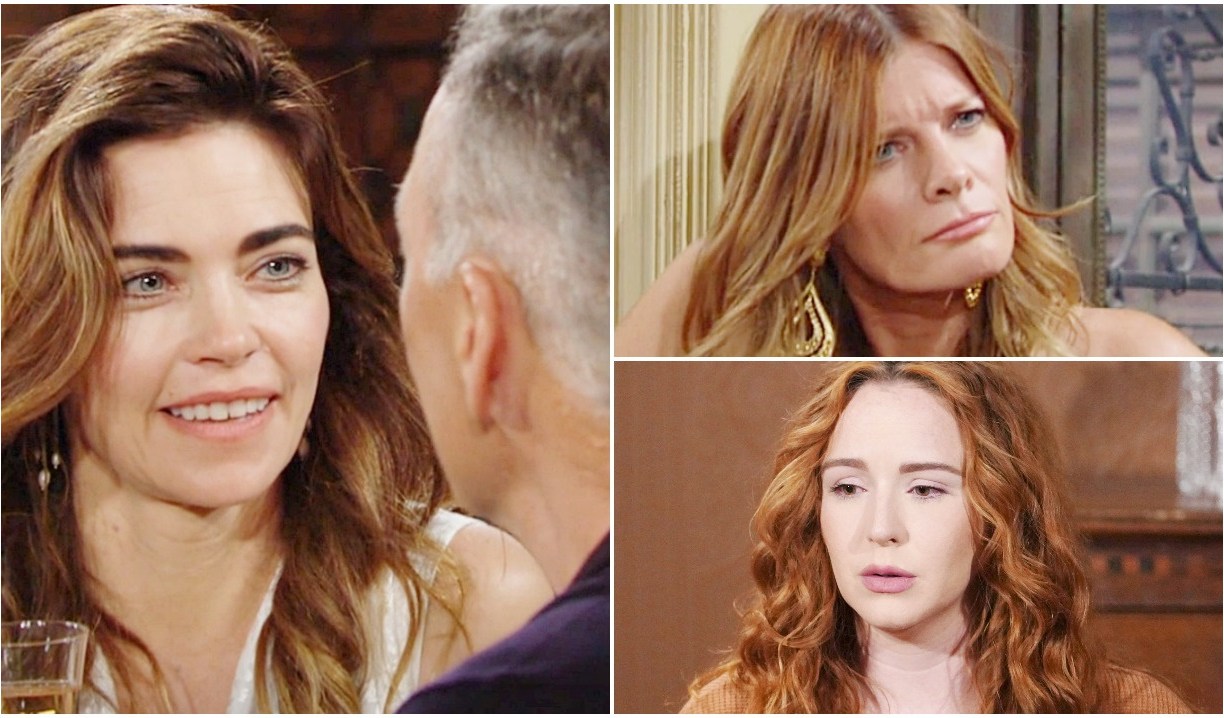 This week’s Young & Restless column is asking a lot of questions. What’s going to happen with Victoria and Ashland? Is the surrogacy storyline getting better or worse? What will happen to characters in the aftermath of Tara’s bust? Is Amanda finally free of the Sutton case? Why can’t we have nice things? We did manage to get some drama this week, but there are still far too many instances where the writing, imagination and soapiness is just not there.

Too Good to Be True?

Ashland and Victoria are the gift that keeps on giving, but many are worried that it all seems too good to be true. Finally, we’ve got the power couple of soap dreams — something has to give, right? Will Victoria find out Ashland faked his terminal illness and seduced her into a quickie marriage with no pre-nup only to rob her family of their company and assets? Or perhaps his company was in dire straits and she’s unwittingly bailing him out. This is the man known as the Locke Ness Monster, and he absolutely could be playing the long game.

That said, I’m hoping it will not go that way. Ashland grimaces and holds his chest even when no one is looking, so it’s possible his diagnosis is legit. The new experimental chemo cocktail could put him into remission, though, and any number of things could ensue. Will these two go on to be a married power pair who cause trouble for all the usual suspects in Genoa City? It probably depends on how long Richard Burgi is committed to doing the soap. Fingers and toes crossed he’ll stick around!

I love #Astoria but I’m sure #YR will screw Victoria over once again because she hasn’t suffered enough and Billy/Adam/Victor will swoop in as this is a misogynistic show!

The only real entertainment value in Mariah’s disappearance is in the speculation — who is holding her captive and why? Is Stitch going to try and impress Abby by “finding” her and the baby at the 11th hour, or has Nina snapped and locked Mariah up in the soundproof room in the Chancellor Estate? It’s left me wondering if they can salvage this surrogacy story or if they’re just digging a deeper hole. They’ve got her loved ones behaving out of character (Sharon’s really not as concerned as Tessa?!) to enable the plot — it’s ridiculous that no one suspects the texts aren’t from Mariah and that her loved ones aren’t all panicking over her ditching her job and refusing to take their calls. Megabucks helicopter mom-to-be Abby would have someone tracking her down by now at the very least! And don’t get us started on a pregnant woman being held without a washroom. Heck, even the props are sloppy…

Spoiler: my timezone doesn’t actually get the show till now but ma’am, this prop department has the whole couch cushion falling out of Mariah’s tracksuit 😂 #YR pic.twitter.com/TFh7LkRxCX

How would you salvage the surrogacy story? Or do you believe it’s beyond saving? Let me know in the comments.

I was a little disappointed when Summer came clean to Kyle, and Tara confessed to Jack, because I thought they’d robbed us of a big reveal moment after all Phyllis had gone through to expose Tara and Sally. But we got it when Phyllis and Lauren burst into the Abbott mansion and had Tara arrested just as she was about to make her escape with Harrison. (She would have gotten away with it, too, if not for those meddling… ) Anyway, the writers allowing Phyllis to, well, Phyllis, saved this storyline from being another dreary, dragged-out disaster. Kyle and Summer coming in with all that emotion and rage at the end was fab, too. So, even if no one gives a hoot about Tara, we got some excellent scenes out of it all, as well as the fraud reveal and a romantic insta-reunion between Kyle and Summer (fastest trip to Italy ever!) as payoffs. Will a Skyle wedding follow? Given that Michael Mealor is leaving and Hunter King is rumored to be gone as well, it will be interesting to see how it will be handled and what will become of Harrison.

One thing I will add is that the writing for Sally has been iffy. She isn’t diabolical but instead schemes when she feels there’s no other way and always regrets it. So parts of this plot didn’t ring quite true for her. That said, she did, once again, prove to be her own worst enemy! It looks like she may wind up working with Chloe next, which could be fun.

* While not everyone shares my view that Billy and Lily are smoking-hot together, we can probably all agree that they’re boring. You can’t just pair two characters to have them talk about their kids, exes and have sex. They need a story that works for them or forget it. They have no story at the moment, and the only one on the horizon involves the same old theme of Adam and/or Victor coming for Billy. Been there, done that.

* Out of Amanda’s entire conversation with Naya and Imani about whether or not to stick it to Sutton, the only parts that resonated were the emotional moments between mother and daughter, and the half sisters. Amanda and Imani bonding should have been punctuated with an embrace, but apparently, we can’t have nice things. Anyway, I’m glad that the Sutton case seems to finally be wrapped and that we can look forward to what’s next for these ladies.

* Victor forbidding Adam to go after Newman Enterprises or interfere with Victoria’s merger was an interesting twist. Will Adam go ahead and poach the employees anyway, behind his old man’s back? If so, it could make for some good conflict ahead.

* Victor offering Rey a job when he knows he was hoodwinked by Chelsea and loathes Adam? Really?

This is just my opinion. Feel free to join the conversation below, but first, look back on the life and times of Sheila Carter in our newest gallery!