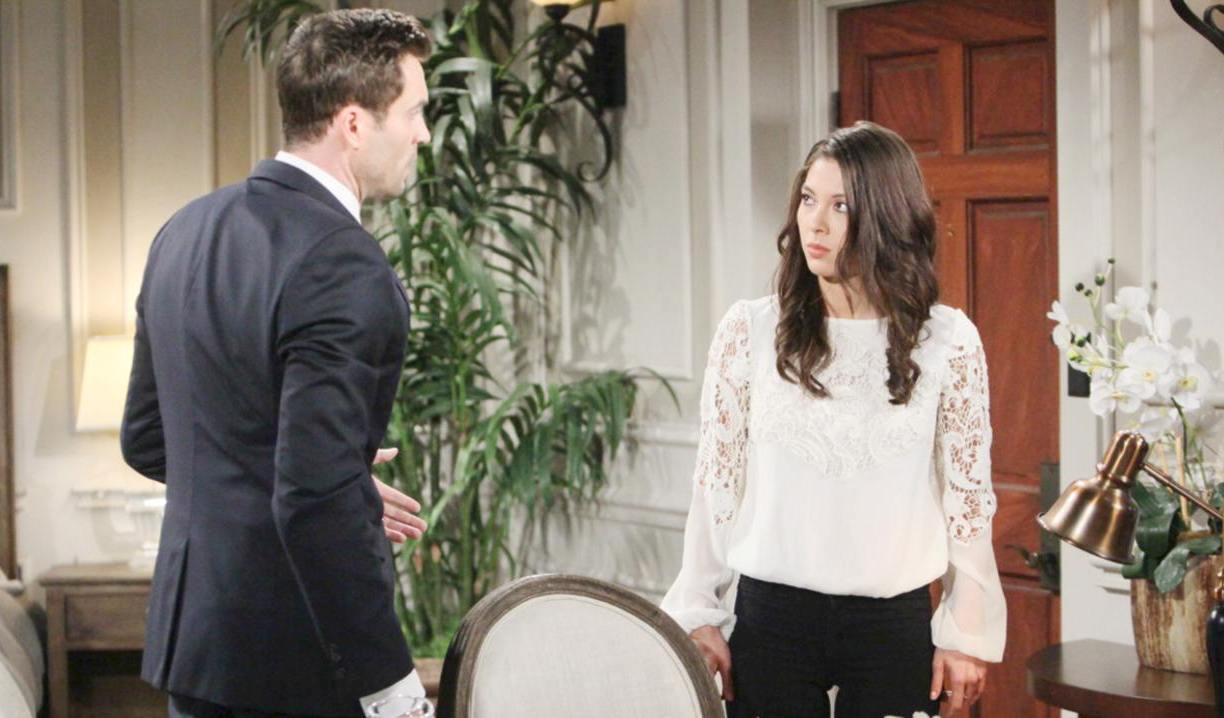 As stated in the last Deconstructing Y&R, the show has been a mix of the good, the not-too-bad, and the ugly, with liberal dashes of ‘the boring’ thanks to a lot of dialogue and some characters we don’t care much about. The trend continued this week. Thoughts:

Happy family?
So, Kevin and Chloe have decided to move in with Dr. Harris, and Chloe also wants Bella there. A neat little solution if you ignore the various logistics of the situation and can get your mind around the idea that Kevin will presumably just disappear with Bella, leaving his family and Esther in the lurch. As I watched, I felt kind of resigned to it. It also leaves open the possibility for a return of one or all of the characters.

Best interests.
While I’m still enjoying Dina’s story, and the building of tension between the Abbott siblings and Graham, it will soon be time to reveal more of the truth about what’s going on. I’ve wondered a couple times if he might another of Dina’s children, but then why not have him run her company for her? Ashley had Ravi digging up information on Graham, so hopefully something will come to light there. Incidentally, during the Ash/Ravi scenes I found myself questioning what the point was of having them kiss and go on dates if they were going to drop the romantic aspect of their relationship without explanation. These kinds of things are generally ongoing once they begin and usually gather steam, not dust.

Cane train.
I’m still enjoying the escalating case against Cane; the character is much more interesting as a controversial figure and it’s definitely been entertaining to see him squirm. There is a lot for fans to debate about in this storyline, which makes it that much more delicious. Having Michael involved is icing on the cake (loved Michael revealing to Victoria that Juliet saved Cane’s ass in Tokyo), and Leslie is always amazing – can we keep her? I also love Hilary stirring the pot, knowing Cane is hiding something from Lily and wanting it to come out, particularly given the complicated history. But is she doing it to see Lily get hurt, or because deep down, despite the animosity between them, Hilary believes Lily deserves to know what he did? Anyway, it’s been good soapy drama, and is building to such an explosive reveal!

Teen bad dream.
Aside from the cringe-y dialogue, it’s not entirely clear what is making the teen scenes so awkward to watch, but as the mother of a 14 year-old boy, I promise you something isn’t right. Even watching teens on primetime shows, one realizes that these kids on “Y&R” come across as sort of ‘shout-y’ and exaggerated. Reed and Mattie’s burgeoning romance is definitely cute, but if this teen scene is going to catch on with viewers like the Y&R’s Glow By Jabot teens did, they definitely need to have more chill. 😉

Still don’t care.
The run-in between Zach and Tessa in Crimson Lights did nothing to up the intrigue about the secret of their past, and I am not here for Scott coming to Abby’s rescue when Zack proves to be a slimeball. Abby’s loud phony arguments with Scott at Newman and her forced insipid flirting across the table with Zach on their date pushed the limits of the nerves this week. Ack.

Next level.
Well, whether you loved or hated Sharon and Scott taking it to the next level is likely down to perspective. I thought the scene with her ripping his shirt open, followed by him grabbing her and growling, “C’mere,” was scorching hot. The searing looks and fingernails on the back…it was all well worth the wait!

Moving day.
Phyllis and Billy exchanged ‘I love yous’ onscreen, as many of their fans have been waiting for, and that was followed up by some sexy slow dancing (after Phyllis told Nick to back off by reminding him he’s no saint, hehe) and some more love-making at ‘their’ place. A bone of contention among fans was Victoria not allowing Billy to have the kids at his new home:

Victoria allowed Travis around her kids & all up in her home. Spare me the nonsense about she doesn't want to confuse the kids w/Phyllis #YR

Victoria and Billy discussed it and Victoria said she made a mistake when she had Travis move in. It confused the kids. Billy agreed. #YR

Victoria, at some point you're gonna have to allow Phyllis around the kids. #YR

Friday notes.
I find it frustrating that Hilary’s motives are becoming less clear as the storyline goes on. The writers need to show us why she’s doing what she’s doing… Sharon and Scott’s ‘morning after’ was amazing and sweet. I was glad Michael was straight with Lauren about her fears… So, we learned Graham isn’t Dina’s lover and I was really feeling a vibe between him and Ashley, so hopefully he won’t turn out to be her half-brother… The walls began closing in on Cane as the warnings to tell the truth and be honest were dropping like anvils, and uh oh, Jordan was there to comfort Lily.

Deconstructing Y&R: The good, the...