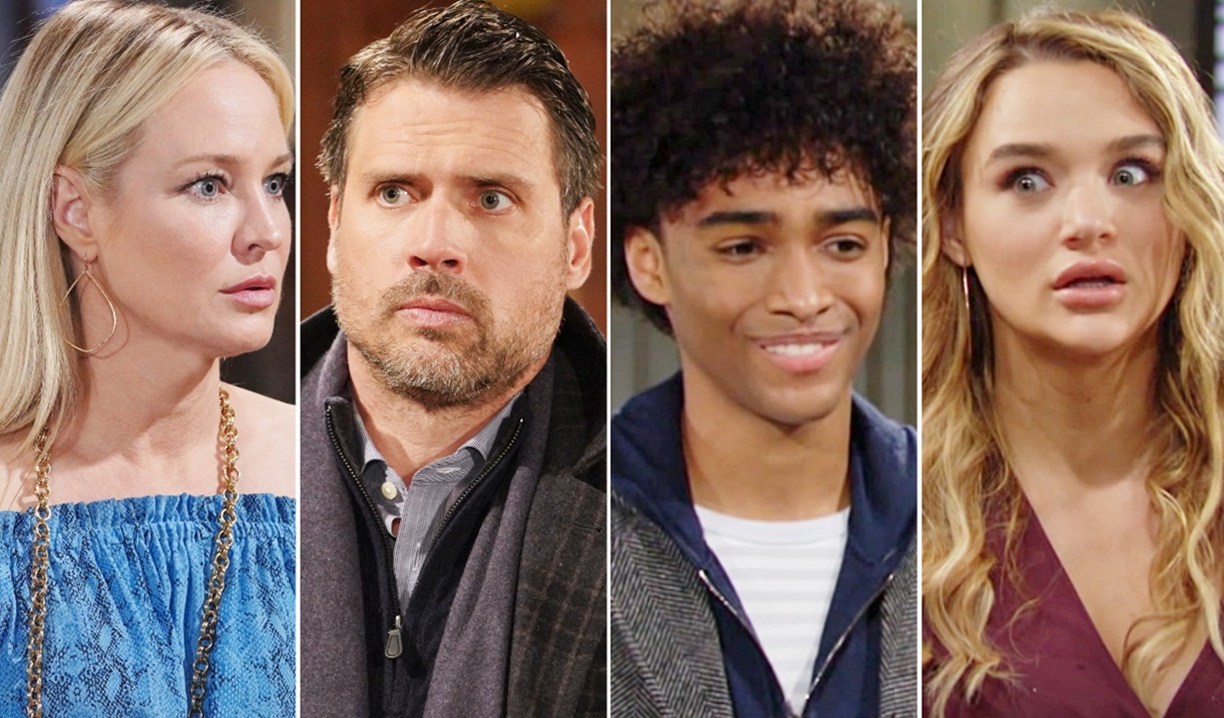 The Young and the Restless had a lot going on this week and an appreciable amount of drama. Let’s break it down…

As Rey’s manhunt for Adam kicked off at the beginning of the week, one highlight was the confrontation between Victor and Rey. When Victor stood up and asked Rey, “Who the hell do you think you’re talking to?!” and then warned him not to threaten him ever again, I realized it felt like it had been a long time since we’d seen TGVN in vintage Victor mode. More please!

Victor to Rey: “Who the HELL do you think you’re talking to? You watch it, don’t you EVER threaten me again!!!”#YR #TGVN 😡🗯️ pic.twitter.com/pMH0Nd1E83

Faith’s downward spiral ended with her being rushed to the hospital after a drunk driving accident, which also occurred because she took her eyes off the road to look at her phone. A cautionary tale indeed. There was tons of soapy tension and emotion throughout, as Nick and Sharon rushed to her hospital bedside and characters and fans alike immediately drew comparisons to when Cassie died. Such emotional scenes — when Sharon cries it’s so realistic! And how about Victor with the travel chessboard and tears! 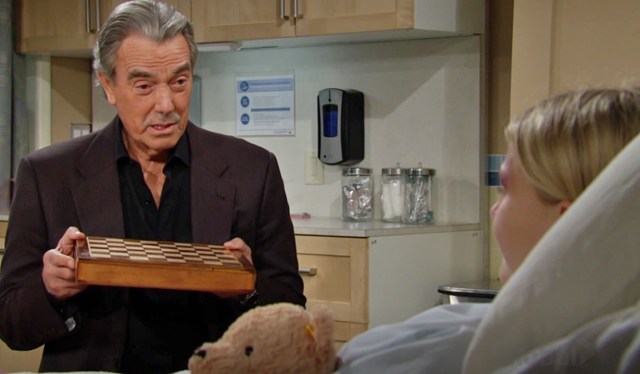 If this wasn’t one of the cutest moments…

Anyway, as soon as talk turned to the Good Samaritan who had dropped Faith at the ER and dashed, we knew it was Adam. Whether she realizes is or not, Sharon chose Adam the minute she decided to lie to Rey about Adam contacting her. Indeed, the writing is on the wall for Sharon to help Adam clear his name and for Chelsea’s not-so-foolproof plot to be exposed. Hopefully, Chelsea won’t revert to being a desperate housewife and will remain villainous.

In related commentary, after all their bad-mouthing of their mutual foe, Nick and Rey’s reactions when they realized that the person who had saved Faith’s life was Adam AND that he’d put her above all else (himself) was soapy goodness.

How do we know Billy’s becoming unhinged again? He talks frantically and his hair is messy. Too funny. Seriously though, this storyline with Billy, Lily, and Victoria isn’t it. There’s little to no rooting value left for either pairing, Billy looks like an ass, Lily is being made out to be more his mother than his partner, and Victoria wanting to team up with the media company she sold off because it wasn’t a good fit in order to fight for another media company she didn’t want until Billy and Adam were involved with it, is unappealing on all fronts.

More: Win *this* soapy book in our giveaway

Okay, Moses is adorable and he was so sweet to Faith. It’s obvious they’re going to be involved in a romance what with Faith being recast and aged up, but what then? There’s literally no teen or young adult scene to speak of… so unless their families for some reason object to them being involved, where’s the drama going to come from? In related, while it was nice to see Devon and Nate set aside their differences, and to hear all the talk of Neil, I had to wonder why Lily wasn’t involved with her family. As mentioned in last week’s column, Lily’s presence is sorely needed.

My initial reaction was to be put off by the writers having Amanda confide in Devon about her dilemma given their situation, but having grown up in foster care, he does understand her situation, and as she pointed out, the mystery of her father’s death now involves Newman Enterprises and/or Victor, so seeking his insight made some sense. The retcon of Amanda’s father, Richard, working at Newman at the time of his death is a bit of an eyebrow-raiser, but I’m willing to follow the drama and see where it goes.

As for Devon’s other ex, Elena seems to have sworn off men for now… but also with lingering regret where Nate was concerned in addition to her feelings for Devon. Only time will tell if she’ll stick to her resolve. In the meantime, more of her friendship with Lola please. Love it.

The Phyllis and Sally confrontations continue to be a crowd-pleaser. Phyllis lunging at Sally as Summer intervened was hilarious. Summer reading her mother so accurately is a strong beat they’ve been playing lately to great effect. Another highlight in all of this has been getting to see more of Lauren. Hail to the redheads, ladies and gentlemen! Now if only we could get more of Lauren and Michael. Their conversation this week was a nice tease. They are sexy, realistic romance personified, and their chat was also chock full of nods to history such as Lauren bullying Traci and Fen bullying Jamie. What’s not to love?

Jack finally learned the truth (okay most of the truth) about Kyle’s affair with Tara and his impending troubles with Ashland Locke. His answer was that he’ll handle it, which left Kyle in the position of looking wishy-washy. I’m ready for Kyle to man up and I honestly think this is what will happen in the end. It looks like we’ll soon find out as the preview at the end of Friday’s show had Kyle majorly on the hot seat as Ashland asked point blank, “Did you sleep with my wife?” Oops!

* I had to laugh at Rey serving a warrant on the home and car of the person accused of poisoning him and apparently being the only cop on his own case. It seems like the kind of thing that could get a case thrown out of court or lead to the the evidence found being called into question.

* Nurse Meredith’s breaks are getting awfully long and are rather conveniently timed. Just saying.

* Nina writing a screenplay about Abby’s life. Really?! They brought Nina back and couldn’t come up with something to play on the character’s history or showcase Tricia Cast’s talents to the newer generation of viewers? To them, she’s merely ‘Chance’s mom’. In related, this week had us asking, Is there big trouble ahead for Mariah and Abby?

* Question regarding Sweaty Betty, er, Billy and his funding issues…

So, Billy is both rich AND broke?

This is just my opinion. Feel free to join the conversation below. Plus, be sure not to miss our soap stars and their kids photo gallery, which is a cute emergency if there ever was one. 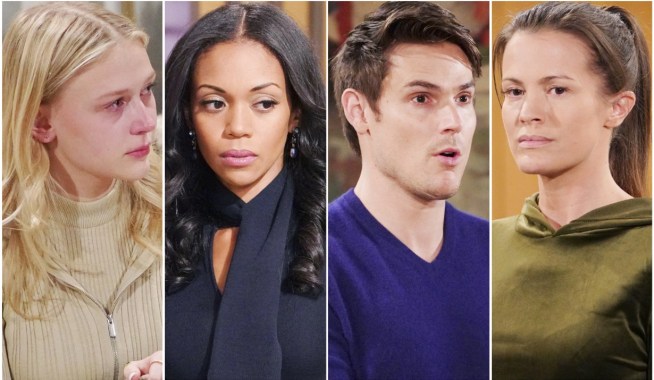 Heartbroken for Young & Restless' Faith and Angry About Amanda's Slap in the Face — Plus, Chelsea Is *So* Busted! 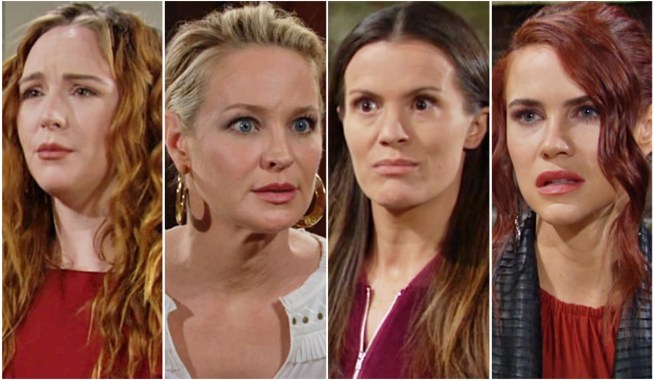