Deconstructing Y&R: The good, the not-too-bad, and the ugly 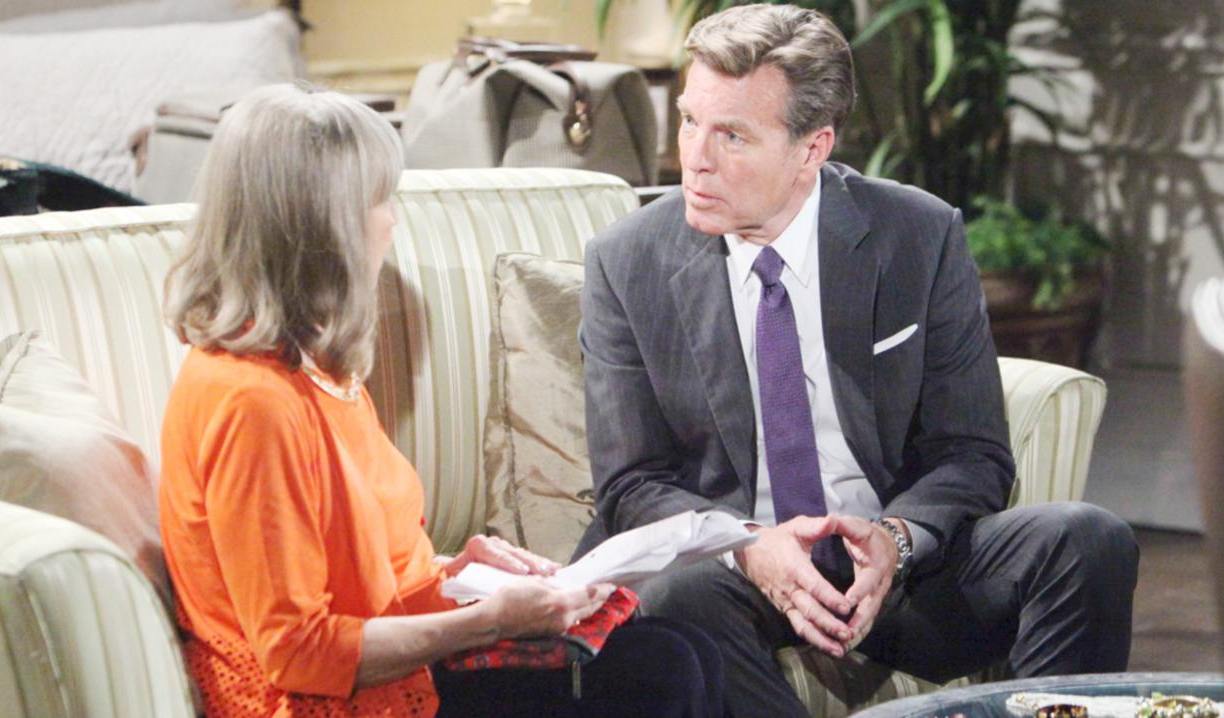 Again this week it was a mixed bag of the intriguing and fun, the odd and not making much sense, and the snooze-worthy. Thoughts:

Funeral fun and farewells.
My hunch, expressed in the last Deconstructing Y&R, that Chloe wasn’t really dead, proved to be true, as the ‘nuclear option’ was indeed a magic drug that made her appear to be deceased. Conveniently, Kevin hung back at the church alone; giving Chloe the opportunity to pop out of the casket, as fresh as a daisy, note in hand, to set up a future meeting point. Afterward, she chirped away to Dr. Harris about her ‘trippy’ experience before he announced a return to Louisiana. Meanwhile, after disrupting the funeral he indignantly protested he could not attend, Nick regrouped with Chelsea and the boys in the park for a conversation about becoming a ‘unit’ that left many feeling nothing but the urge to fast-forward. While Chloe scaring the you-know-what out of Kevin at the end of the funeral was fun, for me, the best part of this botched storyline has been watching Kevin run the gamut of emotions. Kevin’s farewell scenes with his family members, though rushed, certainly had impact knowing that Greg Rikaart was let go from Y&R.

Here we go again?
Sharon accompanied Scott to Chloe’s funeral, as they slowly continued to grow closer. It struck me that they feel real and their ‘no BS’ vibe is part of what appeals. This came into play when Lauren confronted Sharon about her past transgressions, as she clearly didn’t feel she had to hide anything from Scott. As much as I want Lauren to have a story, it shouldn’t involve meddling in her grown son’s love life. We’ve been there, done that, and it didn’t work with Jill and Billy. Also, they should at try to have plot points make more sense – Phyllis’ checkered past was fine, but Sharon’s isn’t? Comparing Sharon to Sheila? Hmm…

Relax and take risks.
Reed and Mattie were cute together at The Underground, but one “Y&R” viewer noticed this:

Wth Devon not recognize his Niece in the club,does he not know that they r now teens #YR

The other scenes at Open Mic Night were dead boring. There was a lot of time spent on ‘the mystery of Tessa’s insecurity’, which still isn’t a big selling point with viewers. Noah kissing Tessa didn’t make an impact either. They need to take a risk with the Noah character and pair him up with someone that would have jaws dropping and tongues wagging in Genoa City.

Deny, deny, deny.
Whether or not Juliet has a case is questionable, but it’s been fun watching Hilary stir the pot. I feel like she shouldn’t antagonize that Jordan dude though, as he’s pretty protective of Lily and probably has copies of those nude photos. In any case, Cane’s in as tight a spot as you’d ever want to be. He chose his words carefully with Lily, only denying there had been any sexual harassment, and omitted the sexual encounter entirely in his statements to Victoria and Michael. It will likely end up being his word against Juliet’s about what happened in Tokyo, but if he doubles-down on his lie and smears her in the process, it could be worse for him in the end. As Hilary and Jordan both said, “The truth always comes out.” Cane knew Hilary was involved behind-the-scenes, but it seemed odd that Lily was more concerned about squaring off with her than with Juliet:

Thanks for recap. I don't get why Lily/Cane are confronting Hilary instead of the woman who brought on the suit, Juliet. Warped story #YR https://t.co/KulCRnArQ5

Ashley and Jack team up.
I could do without Jack’s singing flashbacks, but aside from that I was totally engaged with the Abbott siblings confronting the issue of Graham’s hold over Dina. Also, something tells me Dina promoting the idea of Abby mixing business with pleasure will lead to her getting involved with Zzzack, who judging from Tessa’s reaction to him, is not nearly as nice as he appears.

Friday notes.
Uh oh. Kevin stole a gun, which had me wondering if he’ll go ‘chipmunk’ on Dr. Harris. I was also curious to know if Victor saw Kevin’s laptop search and will show up in Louisiana as well… It certainly seems now that Dina has some sort of serious disease that will progressively worsen. I think they threw in Graham grabbing her wrist as a red herring… Nikki practicing at The Underground, and later catching Tessa talking to Victor on the phone wasn’t all that interesting… Sharon expressed an opinion on Noah’s love life and warned him to go slow, but acknowledged that he’s a grown man and can make his own choices. Thank you!