The Young and the Restless’ Short, Short Week Was Long on Head-Scratching Developments 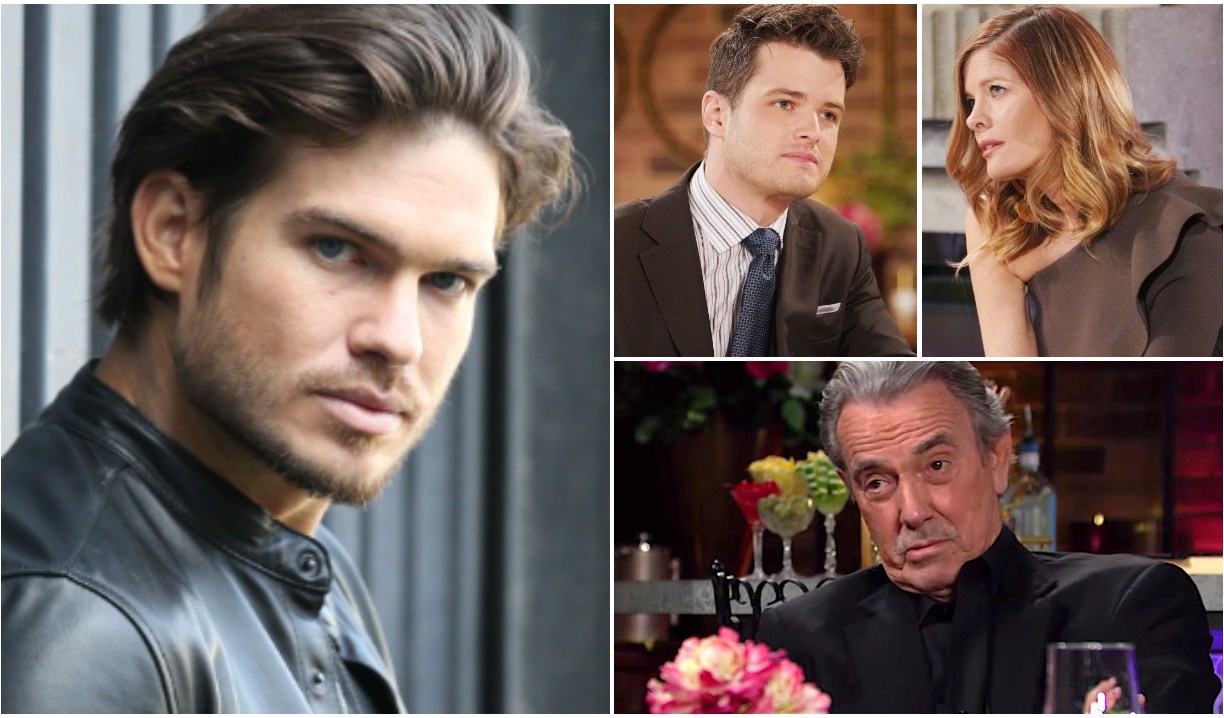 Today the role of Young & Restless Soapbox editor is being played by… me. Yep, Candace Young is on holiday, so I’m filling in, and lemme tell ya, it is strange. We only got a little of the show this week — just a single episode — yet I still feel like we have a lot to discuss, from Theo’s drop-in to Kyle’s freak-out, from Nikki’s bewildering recap to Abby’s also-bewildering announcement. It makes ya wonder, doesn’t it? How the heck does Candi keep her Soapboxes under a million words when she has five whole episodes to unpack? Until she returns to share her secret, let’s go ahead and discuss this week’s episodes. Er, episode.

The brief return of Tyler Johnson as Theo accomplished two things in short order: 1. It made us question all over again why the charismatic actor and his well-connected character were dismissed in the first place. (Or at least why they weren’t crossed over to sister soap The Bold and the Beautiful). 2. It revealed that Kyle had a love child with older woman Tara Locke, the wife of a fellow named Ashland who sounds like the Victor Newman of Manhattan. 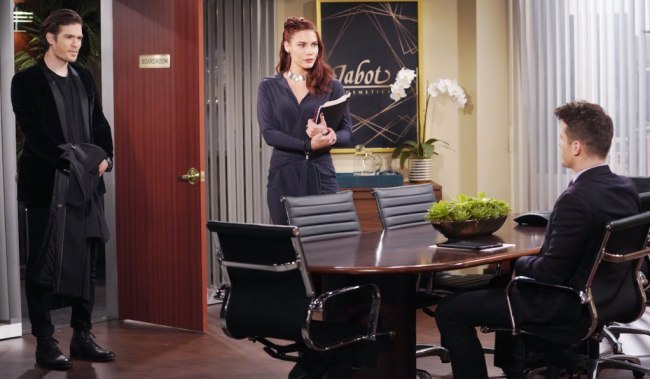 “Oo, Kyle, an adulterous affair! That’s so much worse than chaining your rival to a radiator and faking a terminal illness!”

On one hand, that’s a bit of a head-scratcher. If Kyle was really so hung up on Tara, wouldn’t he have heard that she’d had a child? Wouldn’t he have Facebook-stalked his ex like the rest of us do and seen pictures of the youngster who supposedly has his dimples? Something there does not compute.

But on the other hand, it’s an interesting twist that’s loaded with potential. Not because we’re in the least bit interested in picking up on an affair of Kyle’s that has already been played out off screen but because it promises to introduce to the canvas two major new characters — even a new family maybe.

I can hear you groaning already. “But they don’t even play the characters we like that they already have!” I know, I know. But the show has needed a shot of adrenaline jabbed into its heart for a while now, and from the sounds of it, Ashland is that shot, a Big Bad who is ruthless but not Ian Ward-demented. The Young and the Restless could be setting up a seismic shift the likes of which it hasn’t seen since the Abbott and Williams families more or less replaced the Brookses and Fosters.

Props for Kyle, Demerits for Sally

To his credit, Kyle immediately ran to inform Summer of His Deep, Dark Secret. He even had the good sense to do what soap characters so rarely do and take their conversation somewhere private rather than spill the tea in the middle of the Grand Phoenix. (Quick side note: You had to love Michelle Stafford’s droll line delivery on, “I’ll give you some privacy,” as Phyllis backed away from the couple. At the tail end of a scene in which mother and daughter marveled at how freely they could speak with one another — as if that was more remarkable than that they were speaking at all after Summer shagged Phyllis’ then-boyfriend, Billy — what can an actor do but go for the laugh?)

What was up, though, with Kyle fretting that if his secret came out, he could lose everything? Um, buddy, you’d still be rich and hot; you’d be fine. It isn’t like every member of your family doesn’t have to leave extra room in their closets for all the skeletons to rattle around. And even if Ashland did set out to ruin Harrison’s dad, what, exactly, could he do? Take over Jabot? Is it that poorly run and badly protected, Kyle? Methinks someone was just being a drama queen. Here, Summer recreates the expression on our face when Kyle fretted that he could lose everything. Mind you, it looks way prettier on her.

As for Sally… bless her heart, Courtney Hope does know how to liven up any scene. It’s just disheartening to see the show playing her character as the same sorta half-assed conniver that The Bold and the Beautiful did. Either Sally needs to get way more cunning — she’s all ideas, no execution — or The Young and the Restless needs to let her learn from the many mistakes that she made in L.A. And since arriving in Genoa City. And probably since you started reading this paragraph.

‘It’s OK, You Don’t Have to Watch Every Day’

We’ve said it before, we’ll say it again — and, apparently, again and again and again. If soaps spoon-feed their audiences information, they not only bore them — regular viewers know the exposition and loathe hearing it repeated ad nauseum — they send a very clear message: “It’s OK, you don’t have to watch every day. We’ll fill in the blanks for you. Often. Whether you like it or not.”

More: Y&R scorecard — all the exits in one place [PHOTOS]

This week, particularly galling was a scene in which Nikki told Victor what was up with each of their children. One by one. As if what? He didn’t remember? Legends like Melody Thomas Scott and Eric Braeden deserve better, and so does the audience. 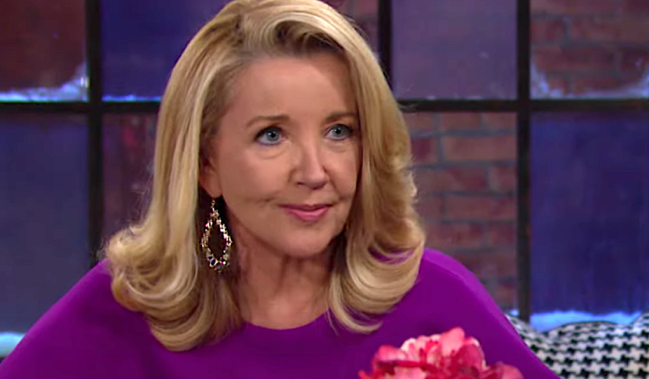 “Victor, my husband, let us have a talk about our children, whose names you’ll recall are Victoria and Nicholas.”

You know what else they deserve? Consistent writing. Victor’s determination not to give up on troubled Adam would be poignant, were it not for the fact that the Mustache has as frequently been his son’s foremost enemy as his biggest champion.

Then again, consistent writing is an area in which the show has fallen short lately rather… um, consistently. See also: Victoria’s renewed interest in her ex, Billy, a development that seems to stem less from organic character development than a writers room throwing up its hands and saying, “Nope. No idea what to do with her. Let’s throw her at Billy again?” Guys, you’re welcome to run with our story idea for Victoria; people seemed to like it. Moving on…

The confounding elements of Abby’s announcement to her family that she and Chance were starting a family were almost too numerous to mention. Seriously, where to begin? With Abby not mentioning until the end of her story that, “Oh, by the way, Chance is gone”? With Abby calling surrogate Mariah someone that she and her husband love and trust? (Since when?) With no one asking the obvious question, “Wasn’t there even one writer on staff who could think of anything to do with you after the wedding but move you immediately into a baby storyline?”

At least Victor had the good sense to look bored and wander off to take a call. Or play Candy Crush; we can’t be sure which. 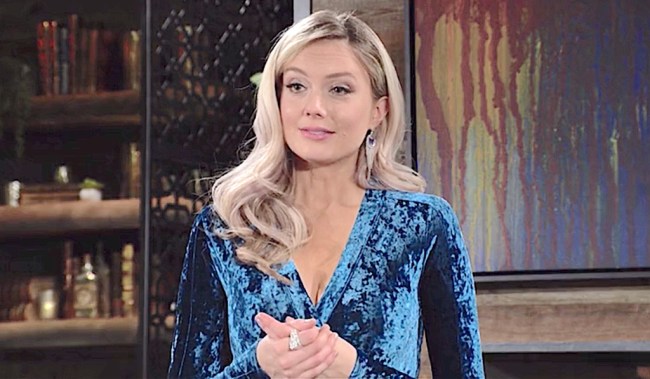 Behind Abby is a painting that dramatically illustrates the way my brains leaked out of my head during her speech.

So, what are your thoughts on this week’s developments? On your way to the comments, stop off at our photo gallery, which runs down a list of fellas with whom Chelsea could move on when her relationship with Adam goes belly up. Well, the rest of the way belly up; it’s in bad shape as it is!