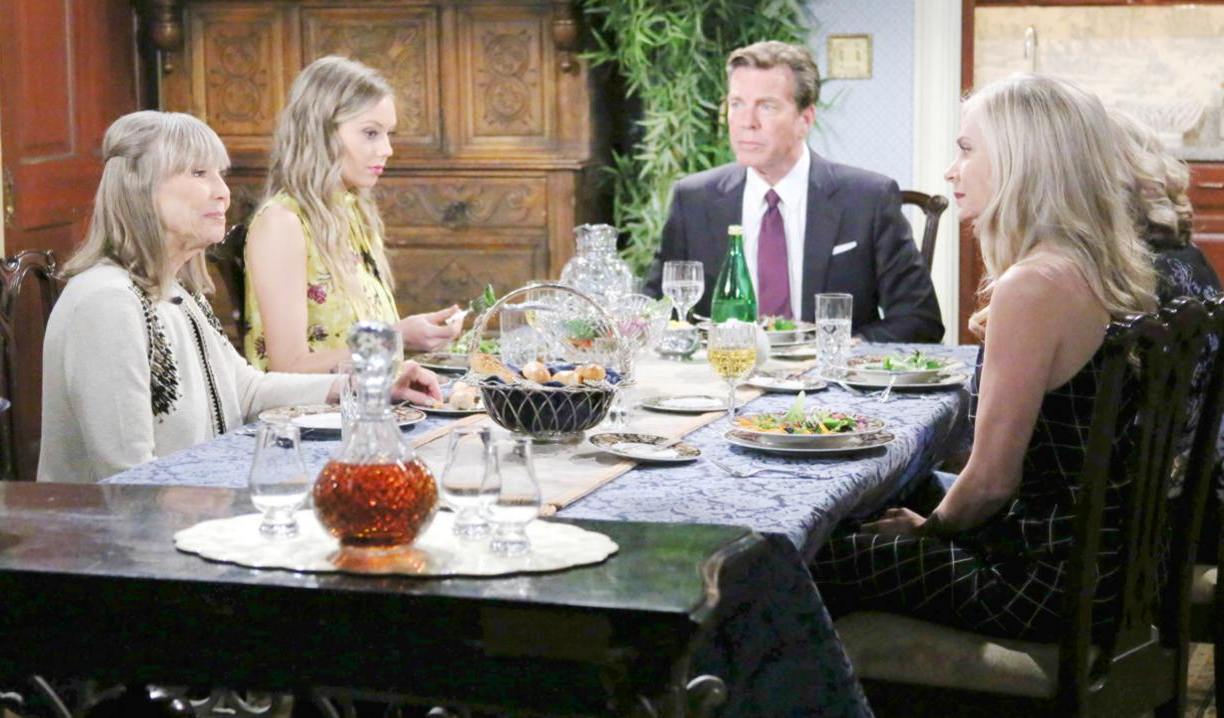 Dina’s storyline continued to bring the classic “Y&R” vibe, a lot of time was spent on the fallout surrounding the search for Chloe, and anticipation built as Juliet geared up to fight back after being fired from Brash & Sassy. As of this writing, on Thursday, the episodes were teen scene and Tessa free, which felt a bit like being on holiday. Thoughts:

Minion miss.
Scott has an interesting background and is not your ‘cookie-cutter’ soap male, however he’s wasted as Victor’s subordinate, placed at Newman Enterprises in a fairly transparent effort to generate interest in a pairing with Abby. Scott and Abby’s trite interaction in the park was clearly conceived in hopes that viewers would mistake it for sexual tension, which should be self-evident if it exists. Scott digging up dirt while writing Victor’s memoir had more potential; even partnering with Christine on a case might work better for the character. Scott and Sharon’s connection remains ‘swoon-y’, and her journey to rediscover herself is refreshing, but it’s time for the writers to invest beyond talk at Crimson Lights.

Suicide solution.
Chloe’s character had truly been put through the wringer by various writing regimes, so not surprisingly, viewer reaction to her death was along these lines:

Chloe 'dying' falls totally flat. I feel nothing. Sage's death was more dramatic. I hate to admit that #YR

My first instinct was to doubt Chloe was actually dead. Considering Victor enacted ‘The Nuclear Option’, it’s quite possible that involved giving her the magic soap drugs to make her seem dead for 24 hours so as to effectively put an end to the pesky searches for her. My next feeling was to realize I didn’t actually much care, which was disappointing considering Chloe was once one of my favorite characters. Chelsea now seems to have no point and her romance with Nick certainly isn’t going to change that. The bright spot in all of this was Kevin’s emotional reaction to the news, which was so raw it had me choked up despite everything.

Anticipation.
The storyline in the wake of Juliet’s firing was an attention-getter, as Cane made matters far worse by telling her to go back to Tokyo, and Hilary capitalized on it by suggesting Juliet file a sexual harassment lawsuit. This is entertaining stuff, as we wait to see what will develop or hit the fan! Meanwhile, Hilary had a private exchange with Devon, which unexpectedly had her admit to being in the condo the night he and Mariah had sex, and was laden with unresolved feelings. In another encouraging turn of events, Devon also held his own while doing business with the formidable Madame Mergeron. I liked it.

Lucky to have you.
Billy and Phyllis’s conversation in the park was a perfect example of all the best things this pairing has to offer. Phyllis later engaged in a sparring session with Jack that showcased their amazing ability to get to each other. Phyllis also had a run-in with Dina, which, while wildly hypocritical, was a clash to be remembered nonetheless.

Dinner with Dina.
As mentioned in the last Deconstructing Y&R, Dina’s return has been a huge hit, and only got better as the Abbotts gathered for a family dinner that was deliciously awkward at times, and later featured an uncharacteristically emotional Dina recalling the days when she sang to her children…or Jack at least. My eyebrows flew to the ceiling in surprise when the typically aloof matriarch burst into song, and Ashley and Traci’s expressions were pure gold. Jack joined in for what turned out to be an interlude so unexpected that Dina’s daughters later wondered what could possibly be going on with their mother. To add to the speculation in viewers’ minds, Graham warned Dina not to plan to stay on indefinitely. Boo to you, Graham; the unpredictable, fierce Abbott matriarch is exactly what Genoa City needs.

Friday notes.
Abby came clean to Victor but ‘forgot’ to mention the part about throwing in with Jack… Chloe’s death seems to have become all about the Newmans, and the preview showed Paul informing Chelsea and Nick about her burial – where is Esther?!… Phyllis and Jack were sniping again. Here’s hoping the writers aren’t dialing up their interactions with a view to anything romantic or sexual down the road. I’d rather see Nikki stop the talk about not being able to survive without Victor and hook up with Jack again… Billy asked Phyllis to move in together, just as Victoria assured herself that the only reason she and Billy hadn’t reconciled was her keeping her father’s secret. Alternate facts… Speaking of secrets, I was taken aback by Dina protecting a man who is being abusive toward her. This doesn’t seem like Dina at all!

Deconstructing Y&R: The good, the...