Deconstructing Y&R: Teen scene dialogue is so sketch we want to bounce 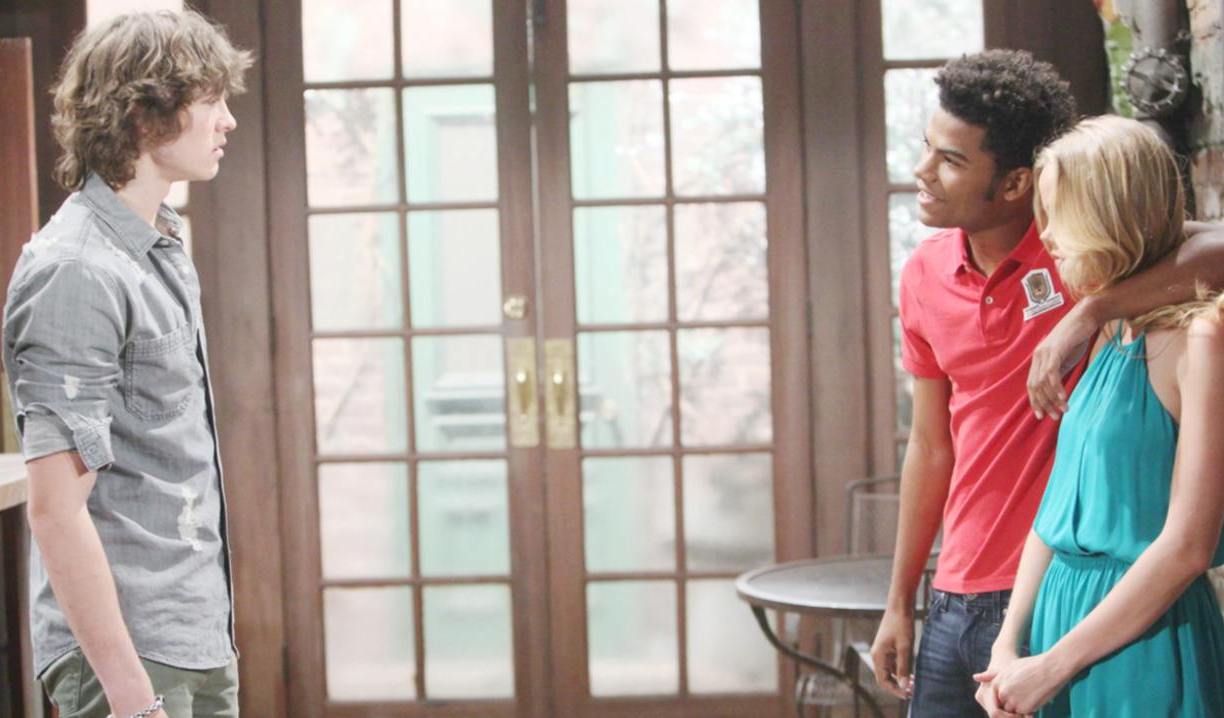 As we’ve come through May Sweeps, the writing for “Y&R” seems to be all over the place. In a nutshell, it’s hard to believe the same writing team responsible for the thoughtful scenes between Scott/Sharon or Dina/Jack is turning out the more cringe-worthy teen scenes. Thoughts:

Solid stories.
Scenes of Sharon and Scott are among those I’m currently tuning in for; this week they grew closer as Scott opened up more about his past. It was fun to see Scott sidle up, unbothered, during Sharon’s sit-down with Nick, who then appraised her new love interest with an appropriate degree of suspicion. Hehe… The Dina storyline has found its groove, not only because she brings her history and complicated relationships with her children to the table, but also because she is a bit of a wild card. It is genuinely difficult to tell whether she’s sincere about wanting to reconnect with her family, or, as Ashley keeps saying, is ‘up to something’. It’s intriguing… Jack being back in Nikki’s orbit, and Ashley in Victor’s, is also working.

Progressing.
While we’ve been treated to some gratifyingly steamy love scenes, as mentioned in the last Deconstructing Y&R, Phyllis and Billy are centered around Victoria to the point one doesn’t feel it’s their story you’re watching. Billy, of course, was distracted by the ‘hockey footage scandal’, which, as predicted, developed the potential to come back and bite Cane in the ass. While this story has built anticipation, it continued to sport puzzling aspects, such as Hilary finding out what happened on her own show after the fact:

If this scandal is so huge why doesn't Hillary Already know about it? Shouldn't it be tending on HER social media? #YR @CandaceLYoung

Anyway, Hilary switched out the flashdrive and delivered it to Lily, which seemed to put Cane on the cusp of certain exposure. I love to see Hilary’s scheming side as long as they also show her vulnerabilities. Speaking of which, she and Devon exchanged compliments this week – ah, those simmering feelings. Here’s hoping something happens to bring them to the surface as watching him follow ‘out-of-character Mariah’ around town as she (bizarrely) plans girlie sleepovers doesn’t float my boat.

Needs work.
While Tessa’s connection with Nikki has some charm, it’s tough to muster up much concern about what she got into in the past with the other newbie, Zack. Meh… Reed’s little mean girls situation was fine in small doses, but the Genoa City teen scene exploded this week with the SORASing of the Ashby twins, Mattie and Charlie, and it wasn’t all good news. First, Lily having teenagers left many wondering what the writers were thinking. Also filed under ‘What Were They Thinking?’ was the teens’ dialogue, which was so awful you could only laugh (“Bruh,” “So sketch,” “I’ll bounce,” “The Human Jock Strap”). Also, instead of letting us get to know Charlie and Mattie, we were assailed with ‘he’s a cocky jock and she’s a perfectionist bookworm’ with all the subtlety of a freight train. We get it! Additionally, many questioned these teens not knowing each other considering their parents work together, and this:

#YR No way in Hell that Charlie & Reed don't know of each other. Reed's step mom was Charlie's surrogate mother. Come on…? #DoBetterYR

While I’m sure it will all settle, they have to do better… On the heels of the news that Greg Rikaart will exit Y&R, we’ve seen almost nothing of Kevin (with Bella), Esther, Michael and Lauren, or Paul. Viewers were excited about these characters being restored to the forefront of storytelling, so it’s disappointing… Abby continues to feature at Newman, with Jack, Scott, and now with Dina, but for me the character needs to be much more dynamic – this is Ashley and Victor’s daughter!

Friday notes.
Cane may have crushed the flashdrive, but his problems are far from over. Hilary may still have the original, the hockey footage he was supposed to make sure didn’t see the light of day is still on the other flashdrive, and Victoria opted to spare Billy and fire Juliet, which makes her a loose cannon. Ooo… Loved Scott clapping back at Victor when he tried to pry into his personal life… Billy snapping at Phyllis for her insecurities was an eye-roller (as was Phyllis going to Victoria’s house). Clearly they reunited these two with a particular direction in mind… Reed’s scene with Mattie was kinda’ sweet… Nick was at his Neanderthal best joining Chelsea as the ‘protective husband’, and oh look, there was Chloe in the stressed out doctor’s house. Interesting…