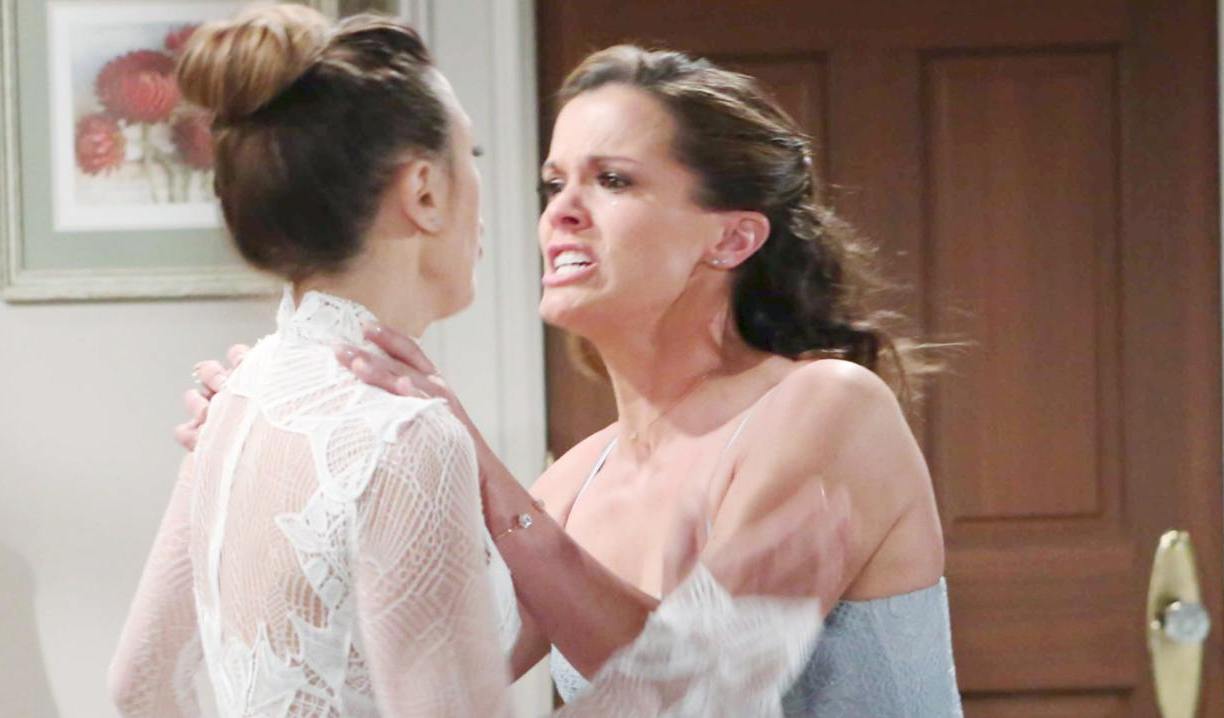 It was a relief to see something truly climactic occur on “Y&R” this week, though it was curious to have such a significant reveal as ‘Chloe killed Adam’ go down outside of sweeps. Hopefully this indicates that show runners realized the soap needed a jolt. Thoughts:

Explosive emotion.
As noted in the last Deconstructing Y&R, the show was delivering dependable drama but nothing ‘can’t miss’ amid the practical pairings and domestic dialogue. Well, the ‘Chloe killed Adam’ reveal was ‘must see’ viewing at last. The lead-up to Chelsea’s eyes finally opening to the truth was dotted with ‘things that make you go hmm’ elements such as Nick, after being so careful with the dart gun and wrench initially, pawing all over it with his own fingerprints, and Chloe’s bachelorette party dress, which looked like a bizarre concoction of toilet tissue and doilies. As the wedding neared, Kevin’s impending feeling of doom and Gloria’s sniping played nicely into our building anticipation.

Gloria is killing it today with those facial expressions. #YR

Also, it was amazing to see Father Todd (Corbin Bernsen)! As the whole unraveling mystery had inexplicably surrounded Nick up to that point, it was exciting to watch Chelsea discover Adam’s ring in Chloe’s drawer and react as she finally snapped out of her denial. The way they delayed the confrontation by having Chelsea shock Chloe at the altar using Adam’s ring was delicious. I was utterly caught up in the emotion as Chelsea finally confronted her BFF, who sobbed out a confession. Chelsea smacked Chloe across the face, lunged for her throat, and then…nothing? What?!

We aren't getting a cat fight between chloe and Chelsea! This is outrageous #yr

Just as we had to suspend disbelief to suppose all the guests downstairs didn’t hear them screaming at each other, we were also left to imagine the catfight that went down and ended up with Chelsea unconscious on the floor. Meh. In any case it not only reignited the controversy of whether Adam deserved death at Chloe’s hand, but left us mulling over Bella’s fate, and wondering what would happen next.

Lost in the transformation.
In Jabot land it was all about Phyllis helping Ravi get Ashley’s attention. Cute, but really, both of these women should be in much more heavy-hitting storylines. If Ashley had taken Ravi to bed before now and blown his young socks off, it would have been amazingly fun. In trying to turn it into a legit serious relationship, with Abby granting her mother ‘permission’ and Phyllis performing a makeover to help the guy appear older and more mature, it has lost a little something along the way. Who knows? It could still turn out to be fun.

More: Hallmark’s Spring Fling event is back with a soap alum in this weekend’s Moonlight in Vermont

Just do it.
Billy returned from Toronto with treats and flirtatiously made plans with Victoria. Reed caught them canoodling and noted his happiness that his mother was less uptight. It’s warm fuzzy domesticity, but at this point it’s been months and they’re still not actually back together. My feeling is; if it’s inevitable, stop dropping him in tease-y scenes with Phyllis or having Victoria pout and doubt – just do it already and move forward. Conversely, if the steamy Phyllis/Billy flashback was to indicate that’s not over…then just do that.

You’re hired.
I’m kind of enjoying watching Cane squirm what with Juliet having been hired at Brash & Sassy…to work with Lily no less. The scene with Lily and Juliet in the bar made me giggle, when Juliet thought Cane had told her about them having sex. Oops. Of course, it’s going to be ugly when it all comes to a head. One has to wonder if Jordan’s interest in Hilary will wane dramatically if Lily needs a shoulder to cry on. Of course, Jordan’s somewhat suspect now, what with his hinting at ‘doing something he wasn’t proud of’ in the past and taking naked photos of Hilary. They tinged him with creepiness. Meanwhile, Hilary’s ex is courting Mariah all over town. Yike. I see heartbreak for Mariah even though they’re all cutesy smiles and kisses now, as there was just too much unresolved feeling between Devon and Hilary. Realizing she was a rebound could turn Mariah snarky and darker again though, which would be welcome.

Friday notes.
The rest of the Chloe reveal played out with Kevin managing to make many feel the loss of a relationship they weren’t even invested in, and Gloria shifting from mama bear mode into an actual voice of reason for her son. The reactions and conversations among the guests after Chelsea announced that Chloe killed her husband made for quite an entertaining gathering! Over at Sharon’s, she made a point of mocking Nick for calling Adam his brother now that he was dead – much appreciated. Chloe was made getaway, and pulled Victor away from a family evening that was a snooze aside from the cool flashback and another foreshadow-y bit about Abby going ahead with her ‘start-up’ idea against Victoria’s advice. Anyway, eyes rolled as Nick, heading to the ill-fated wedding, noticed the tracker on Chloe’s car moving and gave chase. He was the one who wound up surprised, however, when he found her at an airport hangar meeting none other than his father! Good cliffhanger.