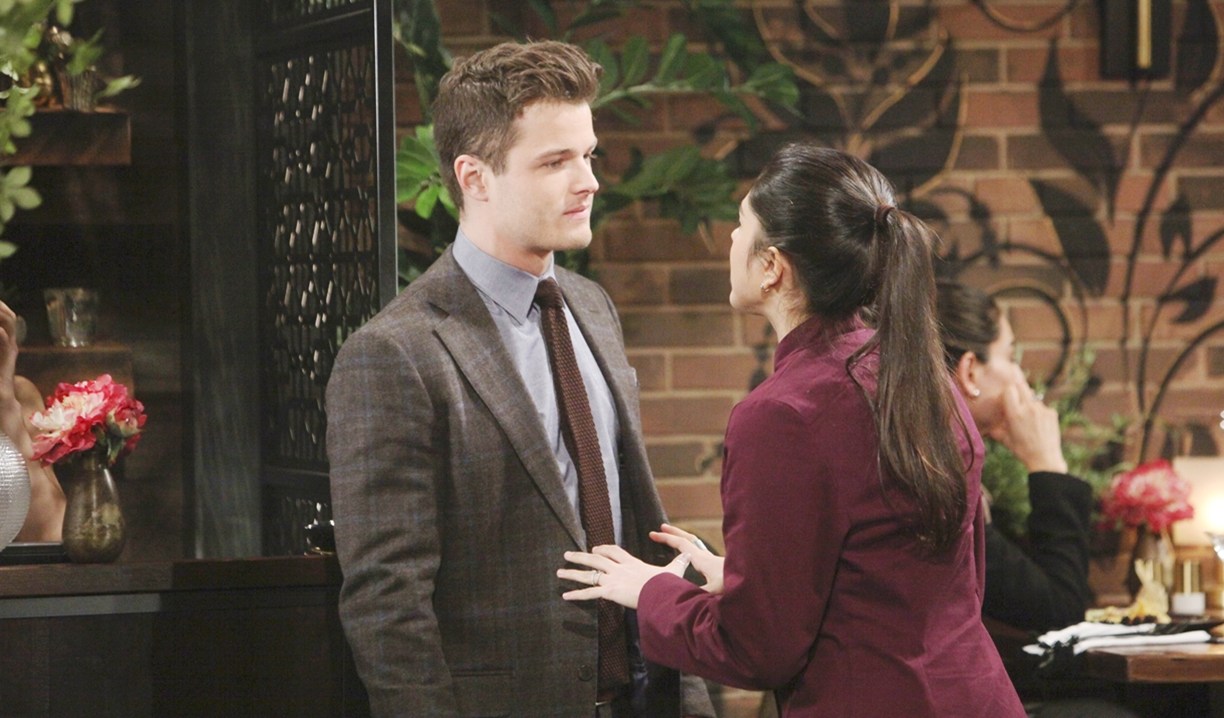 I’m truly hoping that we’ll see some real change/drama on Young and the Restless in the near future because we’re at the point where many are nervous the powers that be won’t even deliver properly on Sharon’s breast cancer storyline (so far it’s been good). The plots have been so tame for so long it’s almost like the powers that be have gone out of their way to avoid controversy. I’m clinging to any signs of the drama being dialed up.

It looks as though the Kyle/Lola/Theo/Summer quadrangle is about to do something, what with tensions rising and the foreshadow-y nature of Summer’s conversation with Mariah. Of course, the ongoing animosity Kyle’s shown toward Theo thus far has been contrived (derived from a disappointing ‘secret’ from the past), but I’ll buy into Kyle being upset over Theo hanging around Society if it leads to something soapy actually happening. Until now this has been the most well-behaved and boring quadrangle ever; the characters all watered down. I mean, why is sexpot Summer being depicted as the ‘mature adult’ trying to be everyone’s friend – how not-soapy is that? Anyway, certain teasers that can be read in Soaps.com’s Young and Restless spoiler section have fans talking about this quadrangle and what could, should, or might happen.

If this was a soap opera… an upset Lola sees the kiss missing the fact that Summer pulls away. She drowns her sorrows with Theo and they have a one night stand. A guilty Kola is determined to work on their marriage until a certain test turns positive…. #yr https://t.co/4s6YyRmq0c

I want to be made to feel something when I watch a soap opera and as mentioned in the previous Deconstructing Y&R, the emotional beats in Sharon’s cancer storyline are certainly doing the trick. I have been effectively drawn into every moment so far, with each step she’s taken in the journey and especially as each of her loved ones has learned of her diagnosis. I think I was most affected by Nick finding out, which speaks to their long history.

I enjoyed seeing Lily and appreciate the effort at realism with having her visit. As far as her interaction with Devon over what might happen to Cane if he’s involved in the money scam, it mainly drew attention to the fact that Devon’s so-called storyline moved off-screen. I’ve always liked Lily and Billy’s vibe, but their conversation at Crimson Lights only seemed to give him another reason to stew over his issues. If Billy’s introspection were more revelatory in nature the story might be more interesting, but the monotone inner-voice and endless dissatisfaction has become tired and doesn’t appear to be generating a lot of sympathy for the character. I could understand Victoria being upset about Billy turning to someone else (and it provided a bit of drama), but this is also repetitive territory for this pairing. In related commentary, it feels like the whole huge issue of Amanda looking exactly like Hilary has taken a backseat to the Billy/Amanda friendship developing. It was interesting that Devon came clean with Elena and Amanda about how he’s been affected by Amanda’s presence but other than that one dream he had, we haven’t really seen it. I still can’t believe no one has uttered the thought Amanda might be Hilary’s twin – not realistic when we’re all thinking it.

Phyllis and Amanda’s new friendship is finding a good rhythm and Phyllis’s flirtation with Chance is fun. I’m not feeling them as a couple but would love it if she got Dudley Do-Right into bed – if only because he’s so sure it won’t happen (and for Abby’s reaction). This week also brought more ‘Vegas’ mentions – it’s doubtful whatever happened with Chance and Adam there will live up to the hype; it feels like Kyle and Theo’s ‘New York’ all over again. Speaking of Adam, he’s resurrecting Dark Horse – interesting how companies can just be put on hold on soaps. Too funny. Anyway, I’m all for anything that might get him back to the complex character he’s meant to be.

I’m not sure where the Tessa and Tanner tour plot is headed, but probably angst for Tessa and Mariah’s relationship as Tessa’s experiencing all of these exciting and new things without her partner. What I do know is Tanner’s hot and if he gets an inkling to make Genoa City his base as Theo did, I’d be fine with that.

This is just my opinion. Please share your thoughts using the comment section and feel free to join in the conversation on Facebook if you can come up with some positives.

Bob Odenkirk Collapses On Set Of ‘Better Call Saul,’ Is Rushed To Hospital

Arthur Ending at PBS After 25 Seasons