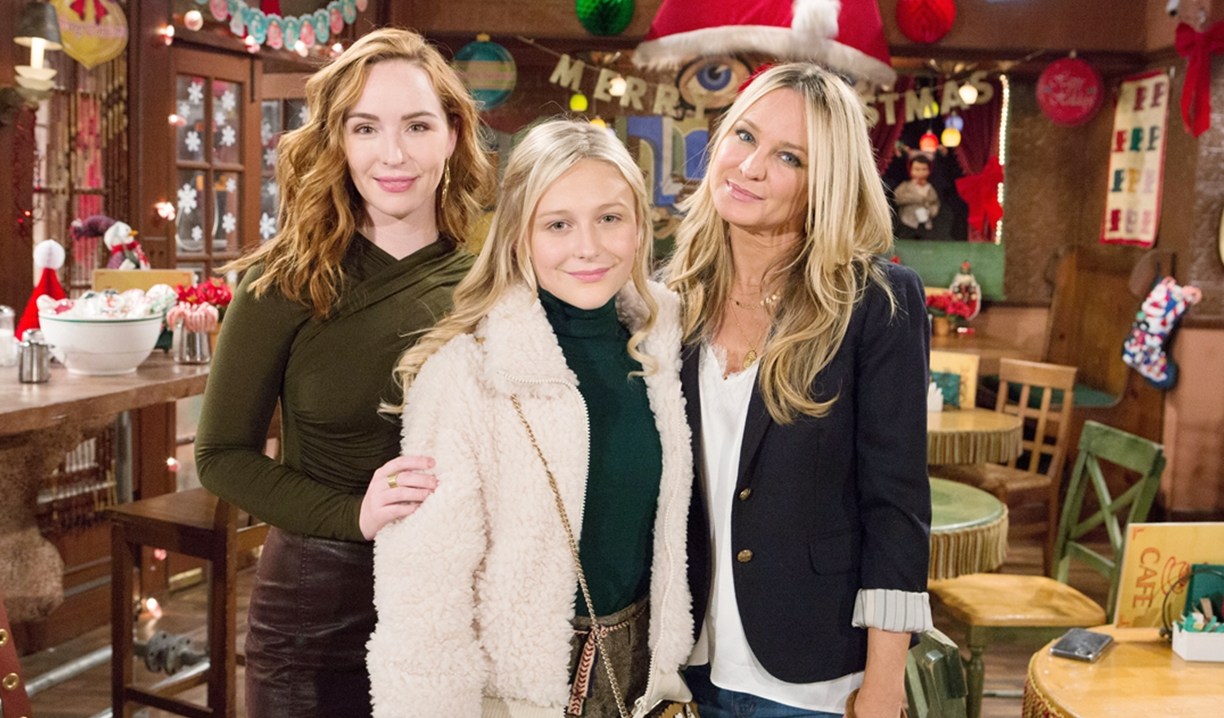 The powers that be at Young and the Restless get a lump of coal for the lack of drama and compelling story-telling but they played some nice holiday beats what with Traci and Jack exchanging traditions with Theo, Faith and Fen returning, and the Abbott gathering. Though some scenes had my eyes glazing over at times. As noted in the last Deconstructing Y&R, there is nothing but talk happening far too much of the time. Hot singles Nate and Amanda hooking up to play backgammon felt symbolic of all that is wrong with the soap right now.

While I enjoyed the heartwarming aspect of Theo sharing his family’s Christmas traditions with Jack and Traci, and vice-versa, there were times I was zoning out during the dialogue. Similarly, the gathering at the Newman ranch was mostly a snooze; full of talk about Billy’s random consulting job, commiserating with Nick over the situation with Chelsea, and Victor on good behavior. Elena and Devon planning a trip was sweet, and Phyllis and Summer celebrated her birthday but, again, I was glazing over partway through the scenes. The uninspired dialogue and lack of drama have the effect of a sleeping pill.

As pleased as I was to see Michael, Lauren, Paul and Christine get together, I’d prefer to see them in proper storylines. The ‘hangry’ argument between Michael and Paul seemed out-of-character and just…inane. Jumping back and forth between their squabbling and Phyllis harping on Chance about Vegas was nothing short of headache-inducing. As for the reveal that Adam’s paying for someone’s silence, it seemed intriguing, but I’m past the point of getting my hopes up about plots that seem to be ‘getting good’. Phyllis spilling Adam’s plot to Nick was a bit of fun, but Adam professing his love to Chelsea sounded awfully familiar:

Faith’s return in Crimson Lights brought some genuine energy; I felt everyone’s happiness at being reunited and their surprise at how much she’d changed because Alyvia Lind’s growing up before our eyes. I also enjoyed the scenes with Faith talking to her half-sisters, though it was a stretch for Mariah and Summer to be visiting with her together and making nice. Sharon and Rey’s awkwardness about ‘Christmas plans’ felt contrived, however – as if they wouldn’t have discussed this before Mariah brought it up. Lola and Kyle’s bit with the stuck Christmas tree was cute, and if nothing else a momentary distraction from Kyle whining about Theo. The ornaments and shared memories on their first Christmas together was also a nice touch. Of all the holiday gatherings, the Abbotts was the most enjoyable for me as a viewer. Though I rolled my eyes at them having dinner at Society rather than the Abbott house, the mother/daughter interaction between Ashley and Abby was authentic and the scenes felt ‘buzzy’ as Michael and Lauren rolled in with Fen after his surprise return. Traci handing out copies of her book was an added feelgood moment I wasn’t expecting.

This is just my opinion. Feel free to share your thoughts using the comment section. Wishing all a happy and safe New Year!