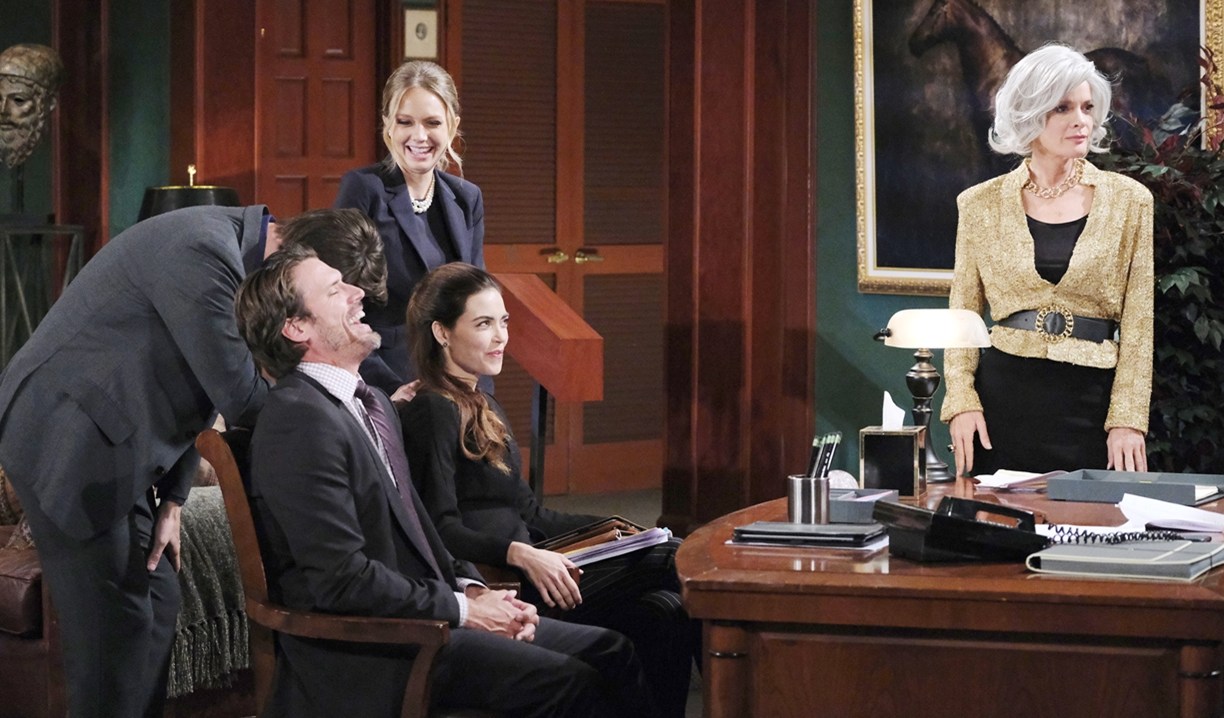 Returning after a week off, I found The Young and the Restless had more energy what with the reveal about Theo and the Halloween episodes, but there was still plot points and characters annoying me.

I was so into the burgeoning friendship between Theo and Lola, and the idea of exploring his character’s vulnerabilities and pain – not that I wanted him to lose his ‘bad boy’ appeal – just give him more layers. Therefore, the idea of Theo discovering he had family in Genoa City and having a reason to stay (as it made no sense he hadn’t gone back to New York by now), was perfect. The way it’s playing out, however, has me leery as the powers that be seem to have swerved back to painting Theo as greedy, mean, etc. through Kyle’s dialogue. It makes no sense for Kyle to be acting as though the person who was his best friend for years is now someone irredeemable who is going to ruin his family. Particularly since Kyle was no saint when he first returned looking to destroy his own father. Bottom line: Kyle’s attitude is annoying and seems to be a set-up for keeping Theo as a one-note troublemaker, which isn’t what I want to see. As for Jack and Traci unearthing this secret, there are plenty of opinions on whether or not it was their secret to reveal, but a Soaps.com reader, cards1, commented, “Tell Traci to quit spending all her time going through her boxes and live her own life.” I couldn’t agree more. As compelling a use of history as this is, the ‘go-to’ of mining Dina’s past should stop here.

Heart of the family

Nate isn’t getting a whole lot of sympathy from me regarding his legal troubles as he voluntarily put himself in this position by agreeing to fake Victor’s death, and his complaining about it is irritating, but I’m happy his issues will keep Amanda in Genoa City. There’s certainly a triangle or quadrangle shaping up with Nate/Amanda/Devon/Elena I just hope it’s not a repeat of Neil/Hilary/Devon. With all that’s happened with Devon and the will I’ve missed the family having an older, guiding member with Neil gone. As mentioned in the last Deconstructing Y&R, Drucilla Winters’ return would be perfect right now, and in a poll of Soaps.com readers she was the most missed character.

It’s mind-boggling to me that the powers that be brought back Michelle Stafford to play Phyllis with so much fanfare and have done exactly nothing with the character – she hasn’t even had sex with someone inappropriate. She’s done little besides chase around after Adam, who couldn’t be less interested in her ‘friendship’ or anything else, and Summer, and whine about the Grand Phoenix. Since when can’t Phyllis execute a diabolical plan on her own?

I’m confused as to Phyllis’ purpose these days. GT’s Phyllis seemed more connected and integral to story. MS’s Phyllis (THIS time around) seems very expendable at the moment and like the writers don’t know what to do with her! 🤔 #YR

While the Halloween costumes in the coffee house were great, listening to Billy Newman’s continued jawing about Adam was annoying. While he has every right to want nothing to do with the guy, there are times I wish someone would remind him he left Delia in the car just to give perspective. That said, he had the best costume, which I’ve seen fans guess was a vampire, Babadook, and Slash with straight hair. Too funny! Chelsea hanging at Adam’s penthouse foreshadowed them getting back together, which has been predictable since she returned. I don’t like Connor’s wheedling, but he’s an interesting kid compared to most. The Halloween dreams/nightmares were fun being based on movies or TV shows, and each gave insight to something the person worries about deep down. Given that Abby’s a Newman I should care more about her insecurities, but I don’t. I think she’d be more entertaining if she acted like the socialite she played in Kyle’s nightmare about Theo. Phyllis wielding power but still feeling invisible and not taken seriously was telling, but again, I’m over Phyllis feeling lost and rudderless. Nick’s nightmare in which everyone loved Adam while he was on the outside was probably the most interesting ‘fear’.