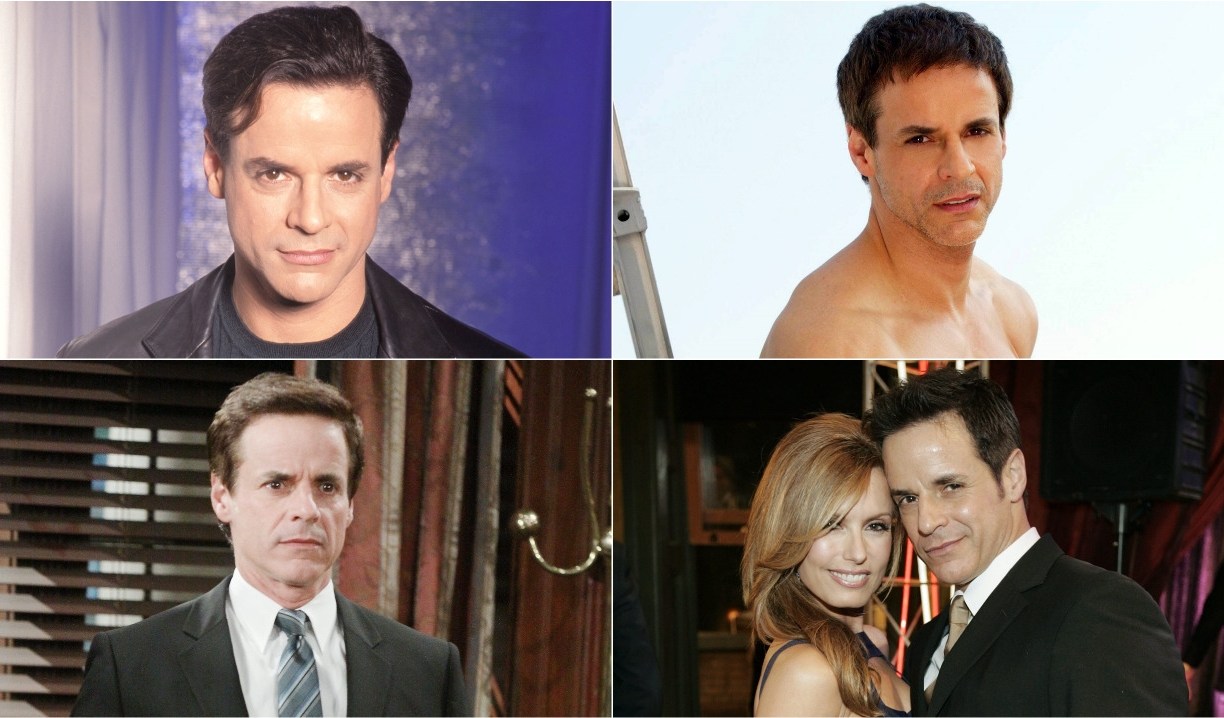 With Michael Baldwin (Christian LeBlanc) tangling with Adam Newman (Mark Grossman) on Young and Restless, there have been hints at him going back to his ‘dark side’ to deal with the threat to his half-brother, Kevin Fisher (Greg Rikaart). Soaps.com thought it would be the perfect time to look back over Baldwin’s history for a refresher on details viewers may not have known, or may have forgotten.

Michael Baldwin was a juvenile delinquent, though he was never caught for any of his low-level crimes. As a teen, he left his family in Detroit after Gloria married Tom, who beat him, and carried guilt about leaving Kevin behind to deal with the abuse, which included locking him in the closet.

When Michael was a law student, he took Kevin in for a time. Kevin took an apprenticeship to become an electrician, but burned down a neighbor’s house while working and got fired, and stole from Michael’s friends, so was sent on his way.

Michael Baldwin debuted on Young and Restless in 1991 when Christine Blair Romalotti went to work at his law firm. She later filed a sexual harassment suit against him when he kissed her and offered a promotion in exchange for a closer relationship between them.

Baldwin tried to improve his image by marrying his old flame, Hilary Lancaster, but he was caught on tape making advances on Christine during a business trip after she pretended to have split from her husband, Danny Romalotti, and as a result he was fired.

Michael Baldwin took a job at another law firm, but Christine took her sexual harassment allegations to them as well. Michael fought back by paying a woman named Rebecca to drug Danny’s tea and pose for suggestive photos with him. Rebecca ended up dead after Michael warned her not to try and blackmail him, and his scheme failed as he was fired from the new firm, and divorced by his wife.

Baldwin offered up an apology to Christine, but then tunneled his way into her apartment when Danny was away and attacked her in an attempted rape. Paul Williams showed up, a struggle ensued, and Michael was shot. Michael was prosecuted and jailed for four years.

When Michael was released from prison, he was forced to become a paralegal, and took up Phyllis Summer’s custody case against her ex-husband, Danny Romalotti, and squared off against Christine, who represented Danny. Michael lost the case.

After Michael donated a kidney to Danny following a severe beating, Christine agreed to help him get his license to practice law reinstated. She then became his probation officer.

Michael Baldwin represented Diane Jenkins when she went up against ex-husband, Victor Newman, but Phyllis, who was living with him by then, became jealous and had Michael kidnapped and held captive. When he learned she was responsible, Michael dumped her, but they later bonded as best friends.

While representing Alice Johnson in her court battle with Sharon and Nick Newman over Cassie, Michael became involved with Sharon’s friend, Grace Turner, and they had sex.

Michael Baldwin and Christine Blair went into practice together after putting the past behind them. Christine’s marriage to Paul Williams fell apart after she caught him with Isabella Braña, and in a twist, Michael believed he was the father of Isabella’s unborn child for a time as they had slept together. It came out that Paul was the father in time for Ricky’s birth. Michael and Christine announced their engagement, which later led to Paul seemingly forcing himself on her. Christine left town.

When Christine returned to Genoa City, Michael confessed that he had set up Paul and Isabella in the beginning, and Chris dumped him to reunite with Paul. Michael helped Christine cover-up a crime scene when Isabella attempted to frame her for her murder, then later saved both Paul and Christine from Isabella after she went off the deep-end and attacked Chris with a butcher knife.

After going to work for Victor Newman, who blackmailed him knowing he’d covered up for Christine, Michael got caught up in the Newman bribery scandal after he paid retailers to give Newman prime shelf space previously designated for Jabot. Michael was getting involved with Victoria Newman when Victor was arrested in the scandal and she decided to leave town.

Baldwin’s brother Kevin arrived in Genoa City and got into trouble while working at Marsino’s. Lauren Fenmore bailed Kevin out but he held her captive after believing she’d ratted on him. Michael intervened, then followed Kevin to Detroit when he ran. Michael then brought Kevin and their mother, Gloria, back to live with him. Gloria married John Abbott and Michael and Lauren became lovers.

Michael and Lauren’s wedding was delayed when Sheila Carter poisoned Lauren via a necklace given to her by her son, Scotty. Once married, Lauren was presumed dead when Tom Fisher blew up their yacht on their honeymoon. Lauren and Sheila were held captive together and Lauren was eventually rescued by Paul.

Michael and Lauren began looking for his father, Lowell, when she discovered she was pregnant. She went into premature labor after learning Michael had covered for Gloria, who had inadvertently killed a woman with the tainted face cream while scheming against Ashley Abbott at Jabot. Michael’s best friend, Phyllis helped Lauren after she developed anxiety and post-partum depression after bringing Baby Fenmore home, where Gloria and Kevin were now living after John Abbott’s death, but Phyllis became angry with Michael and Lauren after Sheila (having had plastic surgery to look like Phyllis) took babies Fenmore and Summer captive.

Michael was reunited with his father, Lowell, when he turned out to be a guru named River who married Kevin and Jana at an ashram in San Francisco. Michael helped get Lowell exonerated from charges related to a bombing in the 1960’s and learned he had a younger half-sister named Eden. Lowell took off after it was revealed he had actually stolen 4.5 million dollars.

Michael agreed to defend Daniel Romalotti, who had been framed for murder by Ryder and Daisy Callahan (as well as Deacon Sharpe). Ryder and Daisy kidnapped Jana and Lauren and held them captive at an abandoned zoo. Sarah Smythe, Sheila’s sister, was behind it all and schemed to have Michael killed when she took over Lauren’s life (she’d had plastic surgery to become Lauren’s doppelganger). During the zoo rescue and ensuing confrontation with Sarah, Michael was the one able to identify the real Lauren.

Baldwin was fired from Newman Enterprises by Adam when Victor went to prison for killing Diane Jenkins (he was covering for Nikki) and later fired by Victor after forgetting to deal with a contract from the SEC while distracted over Daisy Callahan’s release from prison. He became District Attorney.

More: 25 things about Adam Newman’s past

Michael worked with Ronan Malloy to exonerate Paul after he shot his son, Ricky, who was threatening to kill Eden.

After Michael’s son, Fenmore, bullied a teenager named Jamie, and was arrested, Michael was on the outs with Lauren and his son after supporting Jamie. Fen eventually forgave Michael, who stepped down as D.A. to make his son proud, but Lauren took up with bartender, Carmine Basco. When Lauren ended the affair, Carmine became obsessed with her. Michael attacked him, held him at gunpoint, and was later arrested for shooting and killing him and imprisoned. Fenmore, who had battled a drug problem and was the actual shooter, got himself arrested for possession and thrown into jail with his father. After the investigation proved Fenmore killed Carmine, Michael was released and discovered that Carmine was actually alive and being protected by the FBI.

When Michael was diagnosed with prostate cancer after being unable to perform sexually, he became miserable during treatment, pushed Lauren and Cane together (they kissed), and asked her for a divorce, but they reconciled.

Michael Baldwin faced disbarment after agreeing to Phyllis’ request to represent Victor in the Marco Annicelli case and lose. He appealed his suspension and won. After a period of bitterness between them, Michael was asked to represent Victor when he was accused of murdering JT Hellstrom. Nikki confessed before Victor’s trial.

Michael offered to replace Christine as District Attorney as part of a scheme to deal with Adam, who was blackmailing Kevin into doing his bidding.

See glimpses of the past in pictures by browsing through Soaps.com’s Michael Baldwin gallery.