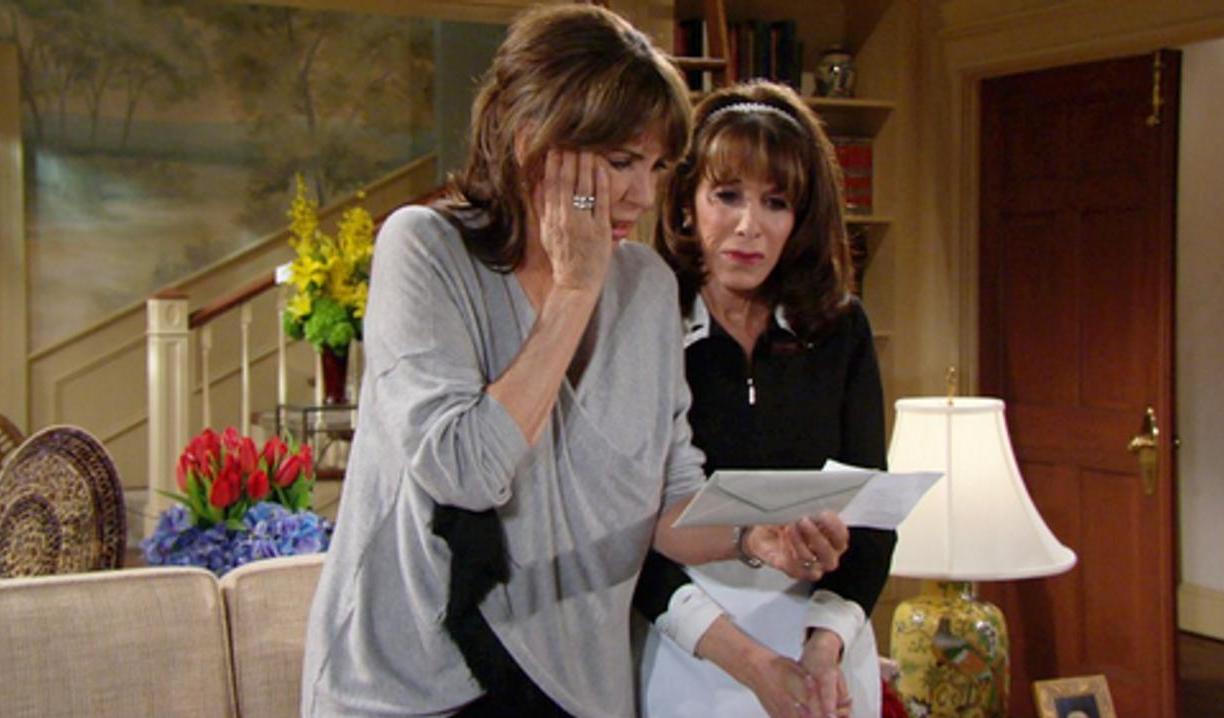 While the show continued to deliver drama, emotion, and laughs, the storytelling is feeling disjointed at times, for example, as with Lauren receiving the call about Scotty previously, a week passed since Hilary and Devon’s kiss with viewers left hanging. Also, while the writers are making very effective use of history and flashbacks involving characters such as our beloved John Abbott and Katherine Chancellor, a small part of me wishes there was a little more going on in the present day that might be as compelling to look back on in the future; are we really going to want to relive Chelsea and Nick’s awkwardness down the road? Thoughts:

All jacked up at Jabot.
Although it’s a stretch to think of Jack and Gloria becoming an actual couple, the bit with them hooking up, the sexual double-talk and sneaking around is definitely a riot! Loved that Nikki saw Jack follow Gloria up the stairs at the Athletic Club and raised one eyebrow speculatively. Hehe! Elsewhere at Jabot, Phyllis and Ravi proved to be as entertaining a team as Ravi and Ashley, though I’m starting to wonder where they’re going with the Ravi character as it’s hard to picture him paired up with either of these women.

Blast from the past.
Flashbacks featured heavily in the latest developments in the Jill/Colin storyline, not just when Colin was in the thrift shop buying back his belongings, but when Jill read the letter that showed up from Katherine. Not only was it a remarkable treat to see the very old flashbacks involving Phillip, Kay, and Jill, but also they were used very effectively to provide a bit of background for viewers not familiar with the history between Jill and Katherine. That said, it was hard to believe that Katherine ever would have said what she did about Phillip and Jill in the letter. In any case, the heart-pounding scenes in which Jill reacted to Katherine’s words were riveting and it was an incredible surprise to see Murphy appear. Well done! Viewers reacted to the storyline on Twitter:

So Colin stole all of Jill's money and will now try to win her back by stealing the secret money Jill didn't even know she had? #YR

Taking charge.
Victor was off the sofa this week as Lauren’s panic over Scotty went full blown after the ransom call and the discovery that Jill was broke and couldn’t help (great scene, by the way). While some get a chuckle over Victor’s billionaire super-powers having such a far reach from Genoa City, Wisconsin, they nonetheless proved indispensable to Lauren’s situation, and it was quite satisfying simply because The Mustache has been so mellow lately it was good to see him back in action – and he can always be relied upon to get results, this we know! Nikki helped temper Lauren’s emotional state in realistic ways, such as sharing the story about Victoria and fixing Lauren’s nails for her. Nice. As for Victor wanting to write his memoirs, I see a lot more flashbacks in our future!

Cuteness.
The scenes with little Johnny giggling as his parents reacted to the news he’d pushed a girl when she tried to kiss him were adorable. It was good to see Victoria and Billy in a lighter situation as well; just because they lack romantic chemistry doesn’t mean they don’t share a terrific dynamic as exes/friends.

Chick flick.
The scenes with Chloe and Chelsea at the penthouse before Chelsea’s date with Nick were likely supposed to create empathy for Chelsea’s nervousness so we’d find them cute, but no…this scenario where they behave awkwardly with each other and then shyly settle in and get more comfortable has been repeated numerous times and has yet to inspire much of a cheering section for the pairing. When Faith called and manipulated Nick into abandoning Chelsea, it was a ‘meh’ moment…been there, done that. I did get a kick out of Nikki looking down her nose knowingly at Faith when she figured out what she’d done though, and their ensuing little chat.

Contributions and customs.
As mentioned in the last Deconstructing Y&R, Victoria taking back Brash & Sassy was a bright spot as she’s always been extremely competent in business, something which she proved again as she addressed Cane’s issues by giving him more responsibility. While some got a chuckle out of Brash & Sassy having an ‘Asian Division’ at all, it made things interesting in that Cane was put to work with a sexy consultant and Billy questioned if Vikki was merely ‘handling’ Cane. Hmm. Anyway, at home, Lily held up her man in ‘customs’, which was another sexy scene for the couple, but also a tad unoriginal as we’ve seen variations on this same scenario many times.

Friday notes.
I actually tried to feel something in the Chelsea/Nick scenes, but no dice. The wrap up with Jill/Murphy/Katherine’s portrait was very moving and delivered a sense of closure. It will be interesting to see how Colin fares once Jill realizes he took the key, found the ring, and sold it. Yike! Loved the fact that Phyllis and Ravi had success with the Fenmore’s app, but felt kind of ‘over’ Ashley acting like an eighth grader over Ravi. The scenes with Phyllis and Jack built even more anticipation for when she finds out he’s bedding Gloria. Can’t wait! Abby interrupting a life or death situation because she needed coddling over a meeting was the most realistic she’s been written in a while. Victoria should be running the company.

Deconstructing Y&R: It's time to...