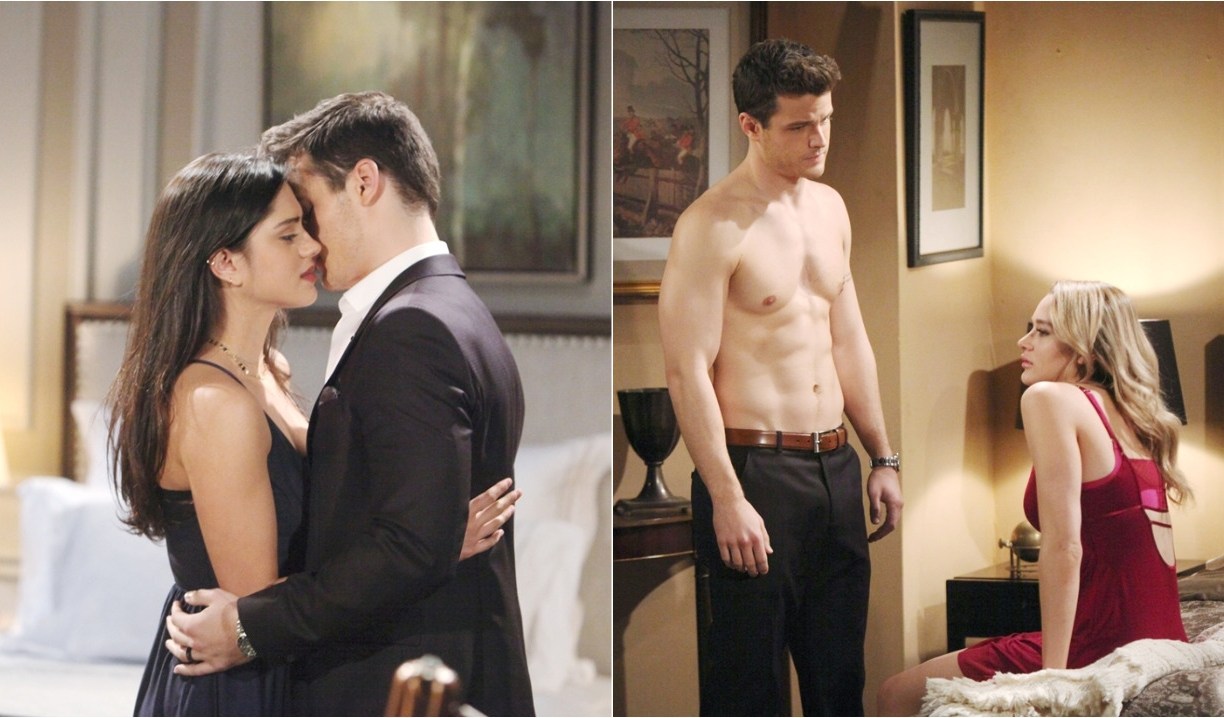 There has been a noticeable change in the pace of Young and the Restless scenes with some being longer with more dialogue. It’s a more classic approach, and such scenes run the risk of feeling dragged out or not being able to hold viewers’ interest, but so far, so good. Thoughts:

In last week’s Deconstructing Y&R, Sharon and Rey were sexy together, but things took a turn after Mia slid the ultrasound photo belonging to the single mother under Sharon’s door. Rey came clean with Sharon, who, to the delight of many viewers, took matters into her own hands and confronted Mia, which made for a classic soapy clash. Naturally, Mia got a pain and wound up in the hospital, secretly panicking at her ruse being exposed, only to learn she was actually pregnant. With news breaking that Noemi Gonzalez is leaving Young and Restless, perhaps the baby is Arturo’s and they’ll ride off into the sunset together, or Mia will go to jail if the truth comes out about her attacking Lola. Fans loved the Mia/Sharon confrontation:

The dialogue with Mia and Sharon was 🔥🔥🔥 #yr.

The Kyle/Summer/Lola triangle was still reeling me in, and I was feeling the most for Kyle and Lola this week – wanting to be together yet knowing it was wrong. However, I thought Lola wanting to make love with Kyle now that he’s married was a big swerve for the character and a little hard to believe. I also didn’t fully understand Phyllis’ objective in setting up Kyle and Lola to be alone (though it became obvious by Friday when she tried to blackmail Jack), and I wasn’t feeling Kyle’s inability to follow through after he came clean about Lola to Summer…he just let her do all the talking and then spooned with her. I guess he’s truly torn, but it seemed so wishy washy, ugh. Summer leaving Newman Enterprises for Jabot, looking all over town for Kyle, and holding onto him at all costs is off-putting and reminded me of how she suffocated Billy when she had her sights set on him. Unfortunately, it’s tough to relate to any of the characters, which is a negative. That said, this love triangle can be considered a hit in soap opera terms as Young and Restless fans have taken sides and begun doing battle online. Kyle was roasted as the next generation waffler:

Kyle if its always been Lola you shouldnt have married Summer #YR That was one passionate kiss at the GCAC. @Michael_Mealor

Why should Lola or Summer believe a word Kyle says?

He changes his mind more than his underwear.#YR

What happens in Vegas…

Following Victoria’s easy chemistry with Brandon with scenes of her and Billy illustrated the lack of natural electricity between them – though the actors get an ‘A’ for their earnest effort to convey it, and I know some viewers do love them together. While I acknowledge that Billy’s behavior was based in genuine caring, I found it irksome to watch him ‘tell’ Victoria how she was feeling, why she was in Las Vegas, what she should do or not do, when she should be going home, and refuse to leave when she asked him to, given she is still struggling with the effects of JT’s controlling behavior. Notably, it was also a puzzling choice to have Victoria subject Billy to a high-stakes poker game, something I felt she never would have done considering their history with his addiction and her issues with it. As for Victor, I’ve no idea why he’s hanging out at poker games in Vegas, so that’s kind of fun.

The scene is clearly being set to let us know that Nick isn’t happy being single and alone in his house, so I wouldn’t be surprised to see him decide to get back with Phyllis. Never say never.

Tessa’s ongoing crises of confidence and Mariah’s pep talks just don’t resonate with me. Way back when they kissed in San Francisco was the last time I truly felt excited about them as a couple, or their potential. Something needs to happen to add some zing to their storylines.

More: Do you forgive soap characters or hold a grudge?

Ol’ Smilin’ Jack is back

It was truly awesome to see the sparkle back in Jack’s eye over Jabot after he struck a deal with Ashley over the phone and apologized to a fed-up Traci for playing her. That said, he seems to be a bit of an island when it comes to fighting to save Jabot as Billy and Kyle both seemed more concerned with their personal lives. I found myself rooting for Lauren and Phyllis to liberate Fenmore’s and then compete with Jack, but in a twist, Jack and Phyllis’ epic clash in her suite at the GCAC was followed by Jack and Lauren teaming up and Phyllis being left at rock bottom. It was fantastic to see Michael romancing Lauren, but I had to wonder if Michael spotting Jack and Lauren hugging was meant to be foreshadowing.