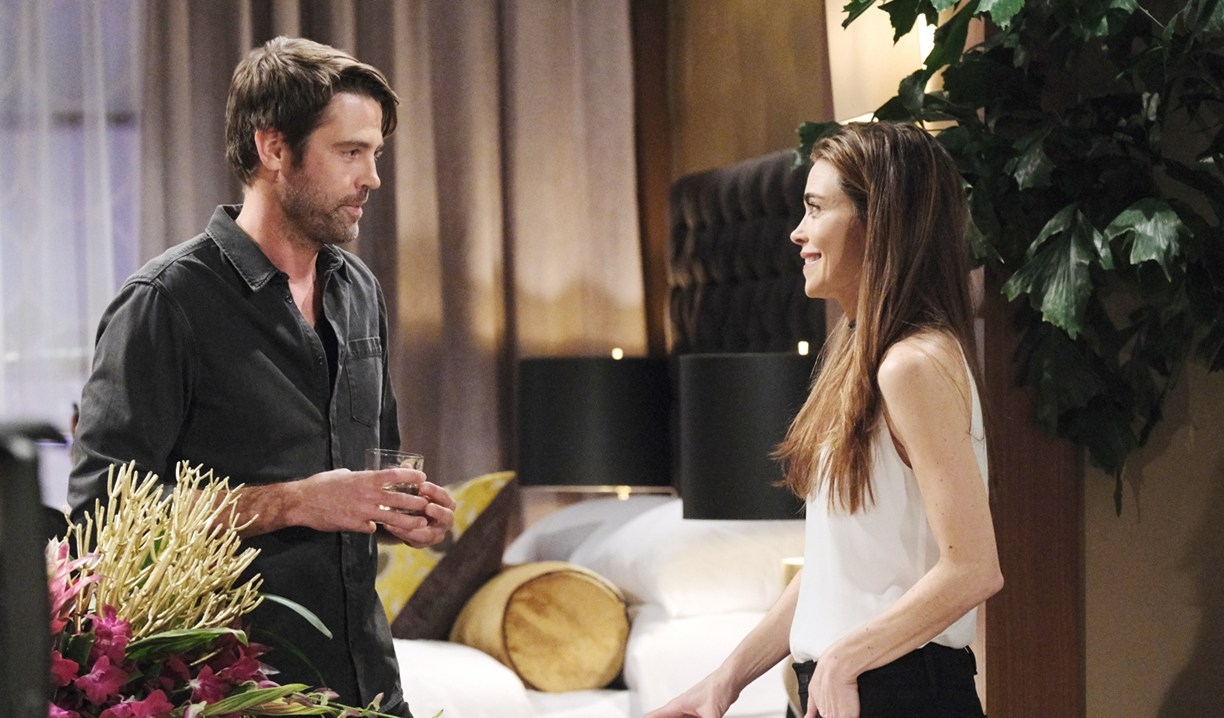 Young and the Restless felt a little more low-key despite the business drama; there were actually more shocking developments in the casting news as Gina Tognoni was let go as Phyllis in favor of a Michelle Stafford return to Y&R. Notably, there was an appreciable amount of ‘love in the afternoon’ this week what with Kyle/Summer, Sharon/Rey, Nick/Rebekah, and Victoria/Brandon having sex, and the budding romance between Devon and Elena. Thoughts:

While I fully expected Phyllis to be ousted at Jabot, and the Kerry/Dominque Carroll reveal was a bit of fun, as mentioned in last week’s Deconstructing Y&R, Ashley’s involvement was predictable, and as the story played out I was left feeling like her actions were out-of-character, so I didn’t enjoy it much. As there’s virtually no chance that Ashley will ‘win’ and Jabot will meet its demise, the challenge between Jack and Ashley didn’t intrigue me much either. It all seemed devoid of the emotion that the Abbotts traditionally bring to the canvas, and for all Ashley’s talk about Dina, we didn’t even see her visit their mother. On the positive side, I enjoy seeing Lauren in the business mix and was happy Rebekah Barlow, (played by Jennifer Taylor), returned – it would be fun if she stuck around. Speaking of redheads, in a casting shocker this week, it was announced that Gina Tognoni was out and Michelle Stafford was in as Phyllis. My two cents – I thoroughly enjoy both actresses in the role but was very surprised they decided to let Tognoni go. I can only assume that they are taking the character in a different direction – probably Phyllis and Jack (bleh), maybe Phyllis and Nick – that Josh Griffith felt would work best with Stafford in the role given history. It also all but guarantees there will be less call for a Phyllis and Billy reunion, a pairing that became popular due to the chemistry between Tognoni and Jason Thompson.

It’s only taken a week of wedded ‘bliss’ for both Summer and Kyle to have lost their edge, and my interest. Sure, I’m happy to watch him in sex scenes, don’t get me wrong, but suddenly they’re both being so polite and considerate that it’s boring…and weird. As for Lola, I guess we’re supposed to be wrestling with the question of which of the women Kyle is truly in love with…maybe he’s just in love with the idea of Lola etc. Regardless, it was insightful when Phyllis said Kyle got what he wanted when Summer saved the life of the woman he loves. I can’t decide how to feel about Summer play-acting that this marriage came about normally, but I do know Kyle as her lapdog isn’t appealing. Here’s hoping something more exciting than a brainstorming session will happen in this storyline.

Walk on the wild side

Victoria letting loose and having sex with Brandon is my favorite side of this character – she seems so ‘in her element’ – and because it’s a soap we don’t have to be too concerned about her life back home in Genoa City. Also, Victoria talking about being an artist made me a little sad for that passion for art she let go over time. Though she does have to return to her kids and come to terms with things, I was really hoping that this wasn’t going to end with the now-always-irritable Billy showing up to get in her face – but alas, there he was at the door sporting a stony look, and from the previews he will tell Victoria they’re going to end up together. Keep it. Fans reacted:

I'm thinking this is the REAL Victoria we are seeing now, and the other one is just a facade. #YR 🤔

Brandon is enchanted by Victoria and those eyes.

Vegas!Victoria is the only Victoria I want. I love her! I love her so much. Protect her at all costs. #YR

Change in the air

Cane got roaring drunk after Lily informed him she wasn’t going to change her mind about the divorce or do another round of ‘let’s fix this’. The scenes at the prison were odd as more than a few people noticed Lily seemed to be smiling at times (unless she was supposed to be smirking at Cane’s predictability). It was irritating that Cane kept insisting he knew what was best for her and didn’t seem to want to listen, and later it bugged me that he blamed Billy for ending his marriage – he’s the one who kissed someone else – twice. Anyway, we’re so used to this pair always getting back together that it might be interesting to see if and how they could move forward as people on their own. After Cane’s talk with Traci, and his interaction with Michael, I was left wondering if Neil Winters’ sudden death might be a catalyst for Cane and Lily to reconcile or if it will cause Lily to withdraw even more into her new life of simplicity.

I like the chemistry with Sharon and Rey; they’re just sexy together. Also, I couldn’t help but laugh when Nick showed up to a shirtless Rey at Sharon’s door. I’m looking forward to Sharon using her new energy to deal with Mia. Whether she’s pregnant or not, it was still Mia that assaulted Lola, and I’m puzzled as to why Lola hasn’t been asking about who attacked her. Will they sweep that under the rug completely to keep Mia viable on the canvas? Remains to be seen.

Devon and Elena are definitely sweet together; one couldn’t help but be drawn in by the way he asked her out for coffee and how they connected so organically. I like that they have a different dynamic than Devon and Hilary – to try and duplicate may have been a mistake. Anyway, I got a good vibe but I’m bracing for whatever complication is going to pop up.