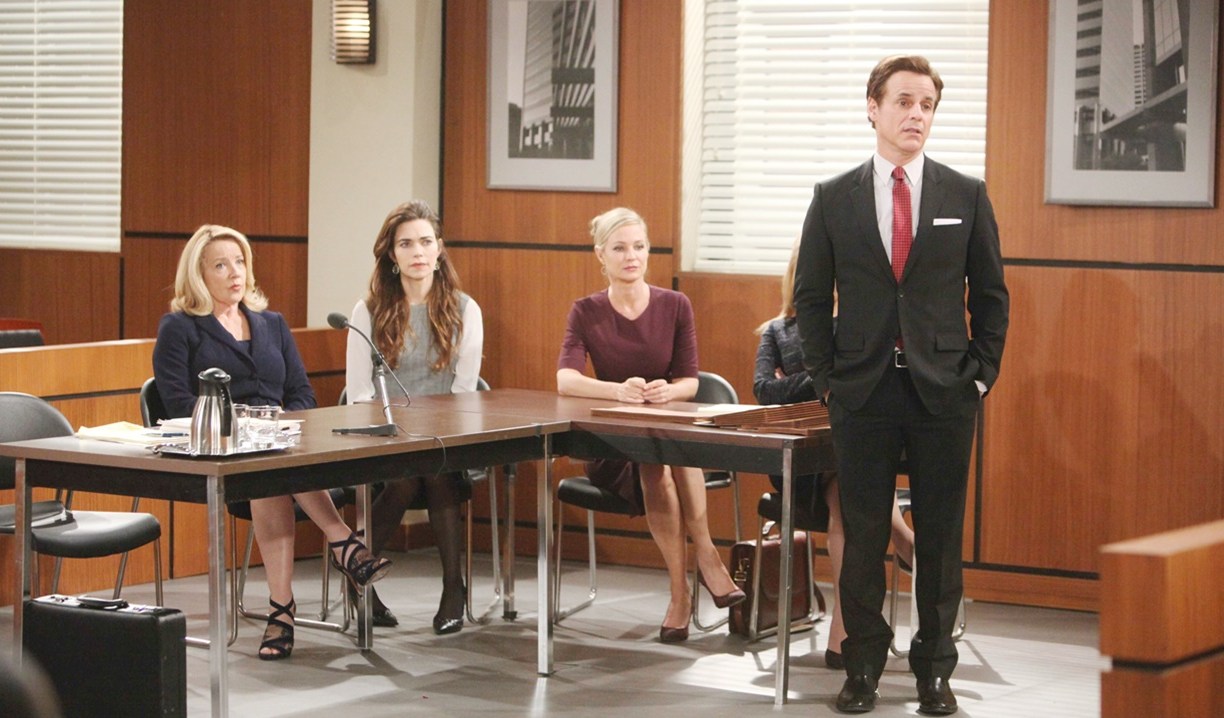 The Young and the Restless storylines have drawn me in consistently this week. The ongoing issues haven’t disappeared, but the drama has been engaging enough to get – and keep – my attention. Thoughts:

Last week’s Deconstructing Y&R, anticipated the impending Jabot battle, and in a twist, Kerry once again pledged her allegiance to Phyllis, and almost immediately afterward led Jack to believe she’d spy on her boss and friend to help his cause. So, will Kerry betray Phyllis? Will she get Jack to put his offer in writing only to use it against him? Will she play both sides of the fence and ultimately lose the trust of both Jack and Phyllis? Or perhaps she has an agenda we don’t even know about. Regardless, it’s a nice bit of intrigue involving the character, but comes just as we’ve learned Alice Hunter has left Y&R and Kerry’s time in Genoa City will soon end.

Order in the court

The courtroom drama was compelling this week what with Tessa, Rey and Victoria taking the stand. Tessa experienced some karma for her poor choice in blackmailing the woman, Rey was forced to admit his love for Sharon in front of Mia then later ended his marriage, fake pregnancy be damned. Mia will be a real loose cannon now! Michael switched gears and put Victoria on the stand, putting the spotlight on domestic violence and it was a full circle moment to bring everything back around to Victoria’s point-of-view as the victim, with an impressive performance by Amelia Heinle, who hit just the right tone. The biggest ‘fails’ in the proceedings surrounded those who were not there – Paul, Victor, Mackenzie and Reed – and Mal Young ignoring Christine’s past as a domestic abuse survivor, which was a missed opportunity to add layers and weave in history, especially given Michael was her abuser.

Paul’s absence sticks out like a sore thumb during all this JT mess. And where the hell is Reed?! #YR

Where is Reid and Mac during the trial? #YR

The idea that Summer would force Kyle to marry her seemed gross but entirely possible, and though that’s exactly what happened, it was a surprise that Kyle was the one to bring it up. Moments after acting completely offended that he could think she was the type of person to blackmail him into marriage, that’s exactly what Summer did. I realize this is supposed to be a ‘like mother, like daughter’ throwback to Phyllis passing Daniel off as Danny Romalotti’s son to trick him into marrying her, however roping a guy into a loveless marriage in return for a piece of your liver while holding a dying person’s life hostage doesn’t have quite the same ring to it. It left me, once again, feeling Summer is conscienceless, and wondering what’s to stop Kyle from revealing the truth and annulling the marriage after the surgery? It’s not like Summer could take her liver back. Given we’re near the end of Mal Young’s writing this could be one of a couple storylines that could zig where we expect it to zag.

Deconstructing Y&R: Drama Ahead As...