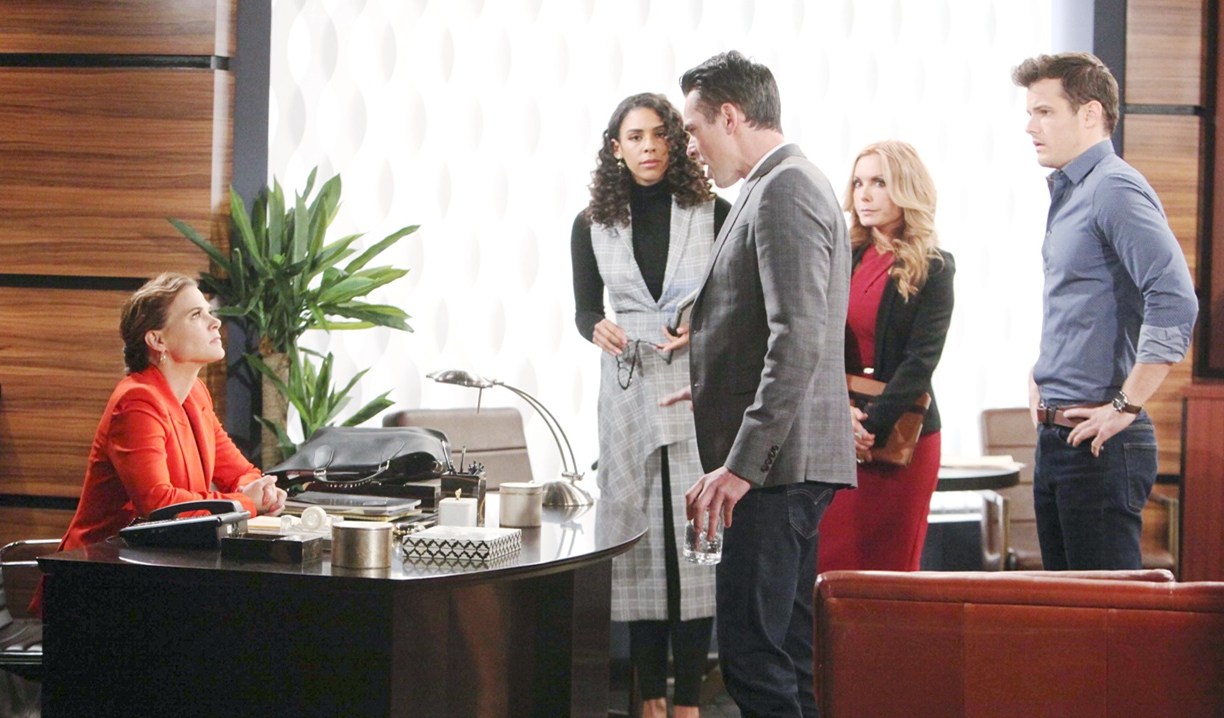 The Young and the Restless has featured the fallout from Phyllis, Sharon, Victoria, and Nikki’s arrests and Lola’s attack this week, with varying results. There’s been a fair amount of drama, yet I’ve been bored at times as there has been a lot of pacing around, talking, and ‘recesses’ to drag out the courtroom scenes etc. Thoughts:

The ball’s in your court

In last week’s Deconstructing Y&R, Nikki’s walk down memory lane was incredible, but it was on with the trial after she finished writing her letter. The women were charged, Victor was thrown out following an outburst, Billy tried running interference on Victoria’s behalf, and Mariah was put on the stand and in a difficult position as it became clear she might have to implicate Tessa if forced to come clean about the video. In surrounding story, Nick kicked Phyllis out and, in a twist, Summer took her mother’s side. This could come into play as Phyllis battles to keep her position at Jabot, given that if Phyllis and Summer threaten to expose Billy for having sex with Summer out of revenge, it might be enough to make him think twice about voting against Phyllis. Another part of the equation is Jack and Kerry seemingly being on opposite sides – refusing to support him in taking back his family’s company could spell the end of their romance. So, plenty of potential for drama, but I had to wonder why everyone is more concerned about the optics for Jabot than the ramifications for Newman Enterprises, given that Phyllis hasn’t been charged and Nikki and Victoria have been. Additionally, if it’s such a big deal why is there no paparazzi swarming the courthouse, and no reporters covering the courtroom proceedings? Just saying.

In a classic soapy move, Mia blurted out that she was pregnant the minute Rey slapped the cuffs on her to arrest her for Lola’s attack. In another classic and funny move, she went on to purchase a pregnant lady’s pee in order to dupe Rey and produce a positive pregnancy test. I was torn between loving her messiness and hating what she was doing and wanting her to be exposed and arrested immediately – so good. Meanwhile, it came out that Lola would need a liver transplant to survive, which brought a truce between Kyle and Arturo, another brave trip to the hospital for Devon, and of course, Summer inserting herself into the situation – there’s little doubt she’ll turn out to be the donor match. I can totally see Summer offering Kyle a deal – they get back together in exchange for her saving Lola’s life. Gross, but soapy, as he’d have to go along with it to save his beloved girlfriend, even while knowing he’d be left with no choice but to break her heart when she comes out of her coma. Viewers reacted to Summer offering to be tested:

Looks like Summer will end up being a match for Lola. I don't like the way Summer is being written, but this would be a positive for her character! #yr

Don’t like where this is going! Did not want summer to be the donor @YandR_CBS #kola #yr