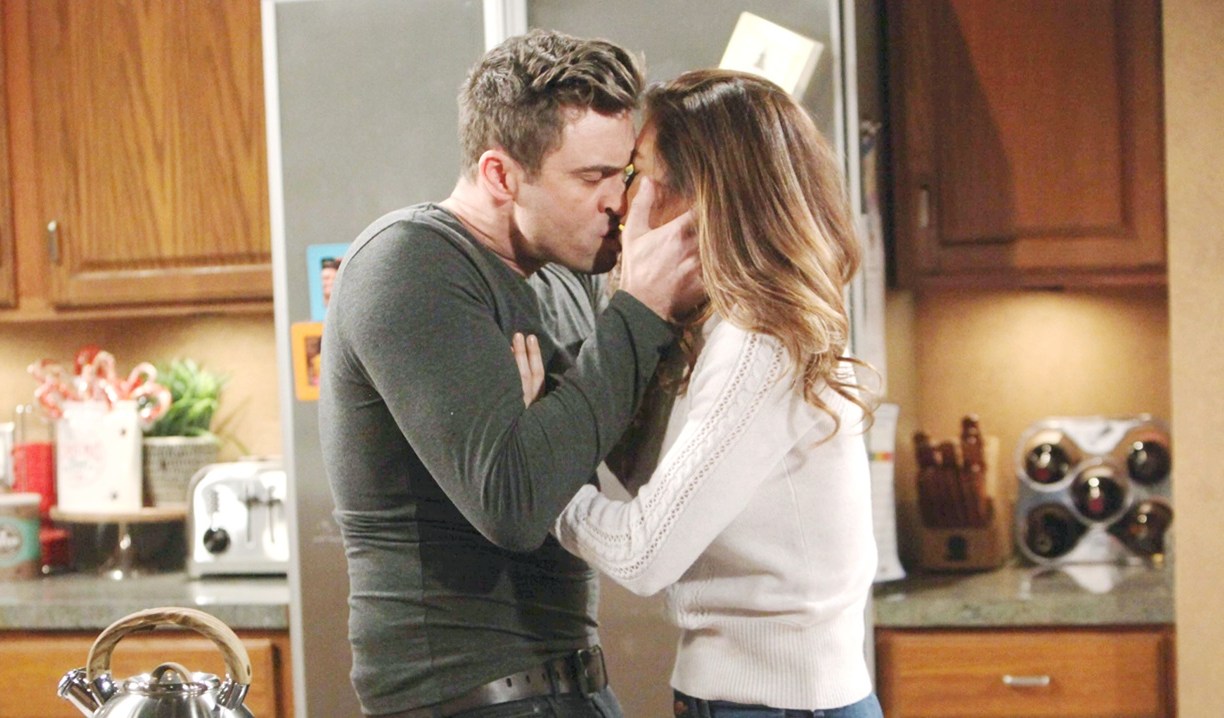 While the Victor arrest drama was pretty par-for-the-course, the teenage boys confessing to Nikki, and her reaction, were soapy goodness. While some of the characters’ behavior was annoying over the New Year’s episodes, Phyllis and Victoria were good for a laugh. The biggest deal of the week was the controversial kiss between adversaries Cane and Victoria, which had jaws dropping and tongues wagging. Thoughts:

Devon’s New Year’s Eve party held some drama, but not for the host, who spent midnight at the window, once again in storyline limbo now that his anxiety is dealt with. Devon and Ana riff off one another well, in fact, it’s almost a shame the actress wasn’t brought on as his new love interest, but the new plot point with her wanting to hide her songwriting from him just seems silly. Also foolish was the idea that Lola would kiss Fen in front of Kyle because she was so pissed off that he bought her an expensive handbag. Lola’s appeal is that she’s a straight shooter, so while I understood her disappointment regarding the handbag, as it really was nothing to do with the gift itself, but instead symbolized that Kyle didn’t ‘get’ her, having her overreact and behave out-of-character made her less likeable and relatable. Also in need of a behavior tweak is Fen, who is either being cocky or pouting over his music and Lola…neither is a good look.

In last week’s Deconstructing Y&R, the classic music and memories made holiday magic, but it was quickly back to reality as Victor ended up being charged with JT’s murder. It seems crazy given that we know Victor was in the hospital when JT died, but the police don’t actually know when he died, only when he was last seen, so it was okay as a catalyst to apply pressure to the women, particularly Victoria and Nikki, to re-establish the bond between Abby and Victor, and to bring Nick and Victor to a sort of truce, but honestly, get on with wrapping up this mystery. More compelling was the drama involving Charlie and Reed coming clean to Nikki about the hit-and-run; well-acted soapy scenes with everyone on tenterhooks and Nikki surprising them with her reaction. Kudos!

Victoria had some unexpected interactions this week – first sharing a bottle of champagne with Phyllis on New Year’s Eve (too funny!), then her ahem, run-in with Cane. Love it or loathe it, everyone was talking about the kiss between Cane and Victoria. While it seems to make no sense at all, it does play into that old soap opera context of people who appear to hate one another passionately having a certain unreleased energy between them…often resulting in ‘hate’ sex or a realization that they truly share some understanding of one another’s difficulties. If it were to become a scandalous affair, it would be messy on so many fronts – imagine all the reactions. As for Billy and Victoria, their dynamic is comfortable…but too comfortable, to the point of boring. Consequently, as much as I love seeing Jill back on the canvas, and her reaction to Billy and Phyllis’ split was funny, I hope there’s a storyline for her beyond weighing in on Billy and Cane’s lives. Viewers reacted to Cane and Victoria’s kiss:

Maybe Cane & Victoria can be friends with benefits? You know, a little stress reliever. Lord knows Victoria needs it. Cane too. #YR

I just rewatched the Cane and Victoria scene (again!). Now that's the way a soap should be. I can't help it, but I loved it! #YR