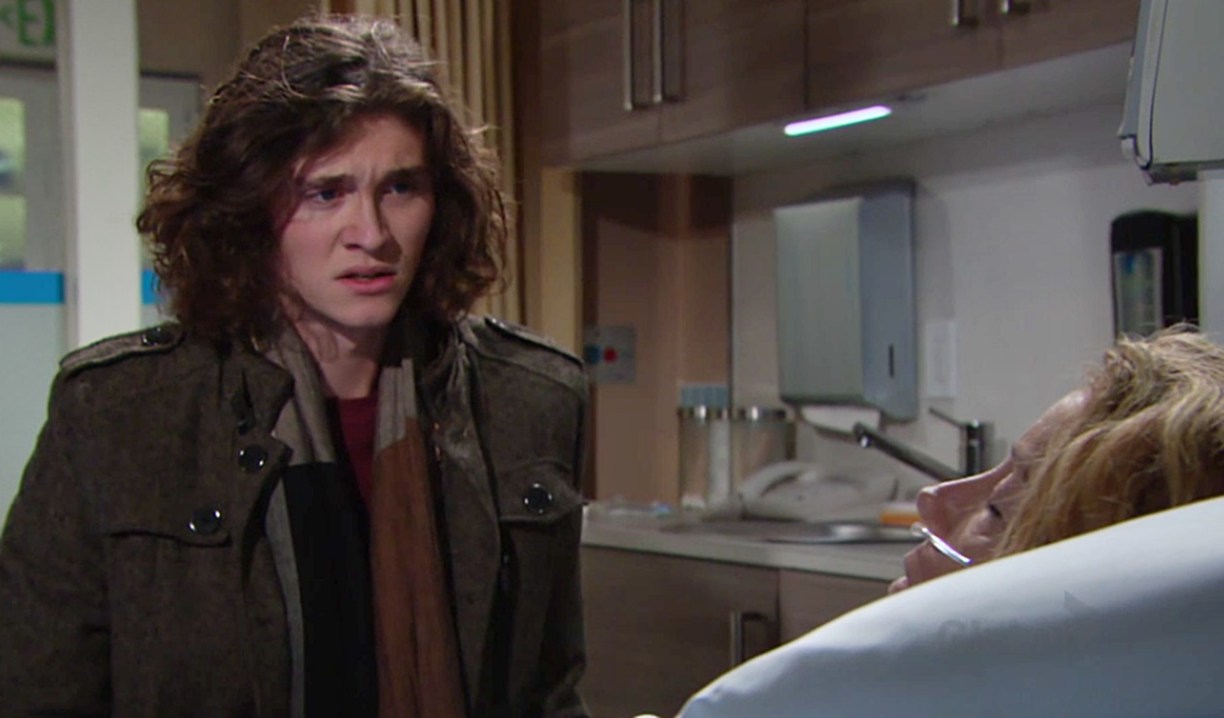 Most appreciated this week was the drama of Nikki’s accident, and the ‘feelgood’ moments such as Fenmore and Lauren singing together and Kyle’s romantic surprise for Lola. Thoughts:

I love a good gathering and the Jabot holiday party had plenty going on to suit me. There were undercurrents as Billy arrived with Victoria and Phyllis watched them (and Nick watched her watching them), nostalgic fun as we got to see Lauren sing, and clashes involving Mia and Rey, who both got a taste of drunk Nikki. The twist with Reed driving Charlie’s car and hitting his grandmother was terrifically soapy as his license was suspended and Charlie had been drinking etc. Later, at the hospital, Nick’s intensity about finding the hit-and-run driver and locking him up was supposed to up the drama but seemed more like a tantrum and was a bit much. It made me realize again that ‘Dark Nick’ just feels off. In any case, the obligatory hospital scenes followed with Jack and Michael making appearances, as well as Sharon stopping in to check on Nick despite the distance between them, which worked into a moment for Phyllis, Sharon, and Victoria to discuss their fear that Nikki may have been targeted by the same person who put JT’s clothes in her bed, and that they may be next. Again, I’m waiting for the next shoe to drop in the JT storyline, which continues to take forever. Other notable hospital scenes involved Phyllis finding Sharon hugging Nick, and Reed’s confession to Nikki, which was heart-wrenching! Looking ahead, I’m glad Noah’s returning to visit Nikki, and at risk of repeating myself, I really wish they’d find a way to keep him around.

More: Mal Young out at Y&R

Wow, Devon has been more assertive lately as evidenced in scenes with Abby, Fen, and Ana, and it’s more befitting the way a person in his position would act, though sometimes it comes across as on edge, which may be deliberate if he’s still having anxiety. I’m less enthused about Fen getting his big break in music within a week of arriving in town; totally unrealistic, and wary of having a lot of singing in the show, which usually doesn’t go over well with viewers. We’ll see though. As for Devon’s dealings with Ana, I found him a bit short in reminding her she was in charge of his schedule, not his life, but in fairness, with Nate constantly at his door with advice and sermons it’s understandable he’d want to establish boundaries. On the whole, Devon seems to be over being ‘too nice’, and it’s realistic that he’d be changed by the death of Hilary and their unborn child.

As mentioned in last week’s Deconstructing Y&R, Mariah choosing Tessa over Sharon seemed a little extreme given all that had happened with Tessa prior to her abduction. Over-simplifying it by having Mariah state that Tessa was sorry for what she did, and Sharon was not, didn’t go a long way to explaining it either, particularly since Tessa being sorry hadn’t been sufficient for Mariah previously, and she had planned to break up with her. Having Tessa be the one urging Mariah to go see Sharon was clearly a step taken to redeem her in viewers’ eyes. In the end, I was intrigued by Sharon telling Mariah she won’t be changing her opinion about Tessa. Fans were divided on the character:

If Tessa is sorry it's only because she got caught.
Remember Mariah your girlfriend stole $250,000
from your mother and her friends.#yr

Even after what Sharon did to her, Tessa STILL wants Mariah to have a good relationship with her mom because she’s that good of a person; always thinking of others. #YR #Teriah

While I’m still on the fence about Jack and Kerry, it was fun to see Jack and Kyle romancing their women and comparing notes. Kyle’s surprise for Lola was so sweet. Jack’s Bora Bora surprise for Kerry, however, was a bit much this early on in the relationship, and her weird flip-flopping behavior was more than I wanted to get my head around. As for Billy, he spent time supporting Victoria and the kids – so good to see Johnny instead of just hearing about him – and it was heartwarming. I’m not up for a Billy and Victoria reunion, however, as I feel only ‘best friends’ chemistry there, but it could happen.

There was yet another gathering at the Rosales’ apartment – always entertaining, but it’s a lot for a new family. I didn’t understand why Sharon would even have agreed to go given how she feels about Mia, and I had mixed feelings about Rey giving Sharon a gift afterward and then returning to the apartment to have sex with his wife…I feel like it wouldn’t take much for him to abandon the ‘fixing’ of his marriage.

This blog is my opinion. Please share your thoughts using the comment section. Wishing all Soaps.com readers a happy and safe holiday!