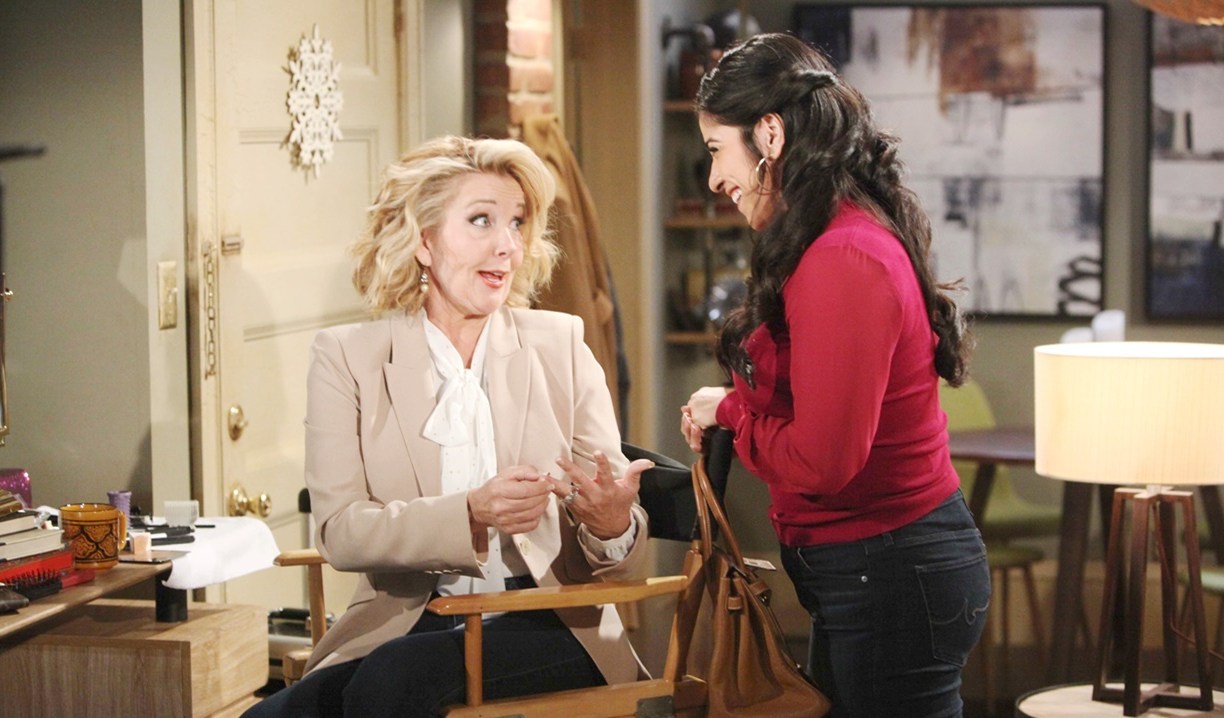 The JT storyline got a much-appreciated boost with the return of Reed…now, can we wrap it up and get some answers? You never know! Meanwhile, there were more complications, what with abductions and falling off the wagon, and Abby managed to cut a deal with Devon to back her restaurant, but it could come back to bite her if he continues to have issues. Lots going on as we head into the holidays! Thoughts:

The abduction of Tessa

The situation with Victoria, Nikki, and Sharon abducting Tessa and leaving her in the woods had me slightly torn. It was undeniably fun watching the women in full intimidation mode with Sharon reacting to their Victor-like ruthlessness – and Tessa had it coming after blackmailing them – but leaving her in the woods in freezing temperatures definitely left me thinking, “Wow…” Of course, Mariah was able to track Tessa’s cellphone, save her, and the incident provided a reason to not break up with her, and set up a situation where she had to choose between Tessa and her mother. After all that’s happened, I was surprised Mariah was so quick to believe Tessa’s version of events and I think it would feel more believable if she was not so completely on Tessa’s side, but rather more torn. Anyway, the JT storyline took yet another turn with the clothes in Nikki’s bed (ew!) and the long overdue re-introduction of Reed into the storyline. With Reed bent on finding his father’s killer, and also making the women feel extra guilty, it’s no wonder Nikki fell off the wagon. While some feel it’s an overused ‘go-to’ for the character, I love seeing Melody Thomas Scott play Drunk Nikki, and anticipate that this twist signals big trouble coming for her. In any case, Nikki got out of bed with the dirty clothes and into bed with Mia (figuratively speaking), which Victoria felt may have been a fatal mistake. This remains to be seen, but Rey sure wasn’t happy about it. In last week’s Deconstructing Y&R, Mia’s party was so wrong, yet so right, and her scenes with Nikki this week were entertaining as well. Viewers reacted to Nikki falling off the wagon:

May I just say…drunk Nikki has always been my favorite thing about #YR! 👏🏾👏🏾👏🏾

She has been so strong without the bottle. Idk why they have to have her go back to it. I wanted to see how this would play out. Her being the strong one without Victor.

Nikki can drink all she wants, but what we not doing is leaving her with any babies. She almost dropped Katie on her soft spot last time. #YR

While I love Billy and Jack being closer again, it’s odd that they continue to hide that Billy slept with Summer, even after he referred to having retaliated against Phyllis in conversation. In what universe would Jack not ask, “What did you do?” Also, no one questions why Phyllis has been so angry at Billy, when she’s the one who cheated. This stuff bugs me. That said, it was a nice little red herring, having her lie to Nick that she was going to the office, then meet Billy at the Club instead. It looked like she was feeling the same pull Billy was feeling (and I’m not convinced she wasn’t), yet she ended up telling him they were done. So, there will be no instant gratification for those who want them back together…perhaps a slow build back after his actions are exposed and dealt with? In related commentary, Jack got stood up by Kerry – this after she ran out on him previously – and I felt kind of embarrassed for him, especially when he showed up at Jabot looking for her; it was uncomfortable to watch. While I wasn’t overly interested in seeing any more of them at that point, the ensuing scenes with the Christmas tree and mistletoe had me warming to the pairing a bit.

It was good to see more of Mattie and Charlie this week, as they interacted with Reed. Cane was grinch-y at first…not wanting Reed around, and not wanting to ‘do’ Christmas with Lily in jail. Then, in an interesting turn of events, Victoria decided to advocate for her newly mature son, and ended up being the unlikely person to inject Cane with some Christmas spirit – I liked this!

So, I was trying to get a read on where Devon was at with his anxiety – no more panic attacks since he took the medication it seems, and steady in his scenes with Cane, though Cane’s concern about Devon making changes at Hamilton-Winters without telling Neil could have been some sort of foreshadowing of trouble ahead with his company (which would mean another fail for Abby too). Anyway, Devon was also strong in his other interactions, both with Abby at the Club and at the private dinner. I liked the whole sneaky plot Abby pulled off in order to get what she wanted from everyone – it would have been something if Lola had turned down Abby’s offer after all that. Abby fuming after Fenmore slipped Devon his demo during dinner was a funny scene – she’s more interesting when furious. I’m still trying to get a handle on this version of Fen, and hoping he won’t be too weasel-y. Loved his scenes with Lauren; it’s terrific to have her recalling her past as a singer, but I’m unsure about a love interest for him. Vote in Soaps.com’s poll at the end of the blog.

Success
I loved Kyle’s enthusiasm over Lola’s success, but wow, the storyline is really setting us up for a major clash between Abby and Mia, first with Abby making her feel small at the coffee house when comparing her achievement to Lola’s, then later at Dark Horse when Arturo went on and on warning Abby not to mess with Mia. At least it makes Abby a little more interesting, and it was also compelling to see the more vulnerable side of Mia.

The blog represents my opinion. Please weigh in using the comment section.