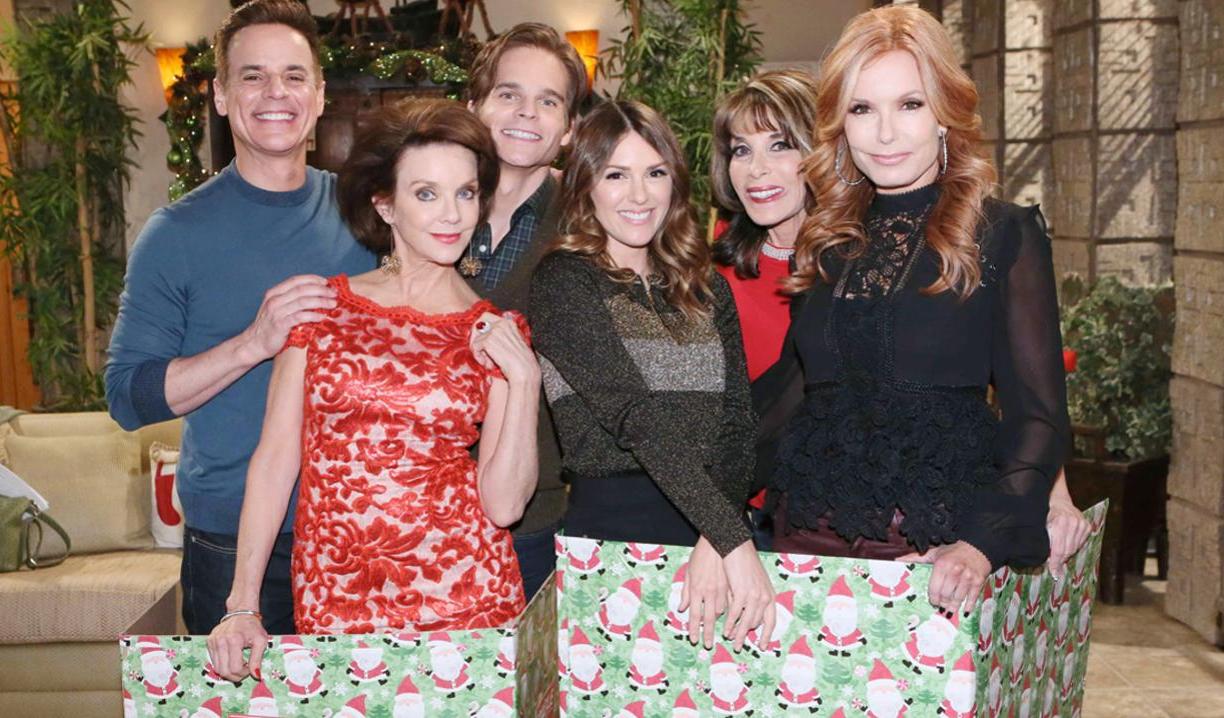 The good stuff continued this week as another family, the Fisher/Baldwin clan, was restored with the return of matriarch, Gloria, and the work continued to return characters to feeling like real people as opposed to one-note plot-twisted caricatures. Restructuring takes time, and not everyone feels that things are where they should be yet, but at the risk of repeating myself, “Y&R” feels like home again, and the rest will come. Thoughts:

Decked in the halls.
The week kicked off with some entertaining run-ins at Jabot. We were treated to another Ashley and Victor encounter in the elevator – loved it – Jill had a go at Jack over the eviction notice, which was just like the old days as in the flashback, and Ashley had words with Jack about his bitterness, which she warned would eat him up. It’s amazing to see their loving yet contentious dynamic back to what it used to be. In other news, Phyllis seemed to be finally done with Jack, who failed to comment on her dye job, and later spent time in The Underground picking cake out of Nick’s hair; a small yet intimate gesture that created a frisson of excitement for some viewers.

Blue Christmas.
It’s great to see the show addressing how children are affected when parents fight, as at Faith’s play. The scene in which she threw down her flowers and announced she wanted a divorce definitely made a statement. As her parents continued to argue in the aftermath, Faith decided to run away. She was found by Victor, who, happily, now seems like a real person as opposed to a cartoon villain, though some felt the grandpa heroics this week verged on overkill. Faith being allowed to choose to live with her grandparents over either of her parents was an interesting choice, and perhaps a bit of a stretch, but it’s a soap after all.

More: Christmas past, present and yet to come for Y&R’s Ashley Abbott

Joy to the world.
As mentioned in the last Deconstructing “Y&R,” it’s been amazing to see the return of Paul and Lauren’s friendship, as well as the couples’ dynamic of Christine and Paul going out to dinner with Lauren and Michael. The return of the outspoken Gloria to the Baldwin/Fisher clan has been a breath of fresh air involving plenty of comedic relief…even just in everyone’s reaction to her! I can’t say enough about what it means to see this group re-energized and together celebrating a holiday again. Glo’s return had viewers excited, even if Chloe was hoping ‘Grandma’ would get run over by a reindeer, hehe.

#YR Oh Gloria is back…. a little comedy drama mixed in. It’s nice to laugh in enjoyment instead of reaction to ‘what was that’!

Mary’s boy child.
The trouble at Fenmore’s is totally believable, and got even better with Phyllis leaving Jack’s orbit to be drawn back into the orbit of her friends, and going to work for Lauren. In Paul’s world, the mention of his parents, Carl and Mary Williams, was a real treat for longtime viewers; nostalgia and history…love it. Many are speculating that Dylan will be killed in the line of duty considering the foreshadowing of the conversation between Christine and Paul about putting him on a dangerous case. Yike. Seems harsh for Paul to have another son die due to a decision he’s made.

You’re a mean one, Mr. Grinch.
Jill harping on Billy about Victoria and the kids produces an instant headache for many at this point. However, it was heartwarming and entertaining to see Billy go over and hang out with his sisters on Christmas Eve. No one can blame Jack for ‘hating’ his brother right now, but he definitely seemed a little Grinch-like when he made him feel unwelcome on the holiday. What a contrast in the subdued mood at dinner after Billy left. Later, Billy sat at a bar, alone, on Christmas – definitely gave us deja-vu.

Home for Christmas.
As much as I enjoy the Lily/Hilary rivalry it’s getting old for Lily to have no storyline beyond looking after her husband’s needs and arguing with Devon about Hilary. Of course she works at the Club, but how about a real story? As for Hilary and Devon, they are an electric pairing when they’re ‘on’ and I certainly rooted for their love to win out during the terrible blind Neil months, which is perhaps why it bothered me that she was still playing games with her husband at this point. That said, the flip side of her machinations with the agent showed that she wanted to stay with Devon at GC Buzz more than she wanted to pursue opportunities to become a big star. In any case, it was fantastic to see them celebrating the holiday in their own home and the Winters family starting to come back together after all the plot-driven strife.

Friday notes.
I enjoyed the Newman Christmas gathering scenes with Faith tracking Santa, Noah and Abby discussing his issues with Victor, the flashback to Victor holding Nick up to place the star on the tree, and thought it was effective to contrast the mood there with the sadness at Sharon’s place. As for Chelsea and Nick, it’s not that they have zero chemistry, it’s just that the idea of them getting together creates no sense of anticipation or excitement. The bit with Victoria being frazzled by her kids was odd…perhaps a bit contrived, as though suddenly she’ll realize she needs Billy. At least we, I mean he, got his Christmas miracle, with Jill promising to stop harping on him about Victoria and the kids. Again, a potential Villy reunion isn’t a particularly thrilling proposition; the actors have more of a ‘friend’ vibe than a passionate one. Devon and Hilary finally had a clearing of the air conversation, which was a long time coming, but the things she accused Devon of didn’t really seem like the character we know or have seen, so that bit felt off. Loved the overall Christmas spirit of the episode, and the ending was perfection with the caroling of Annie’s Aileen Quinn in the park and Nick taking Christian to see Sharon and Dylan. I teared up. 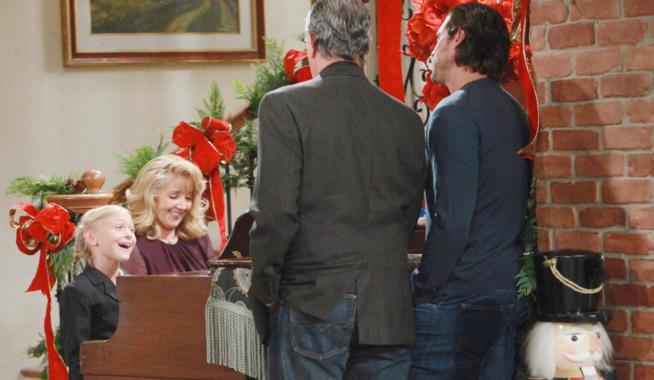 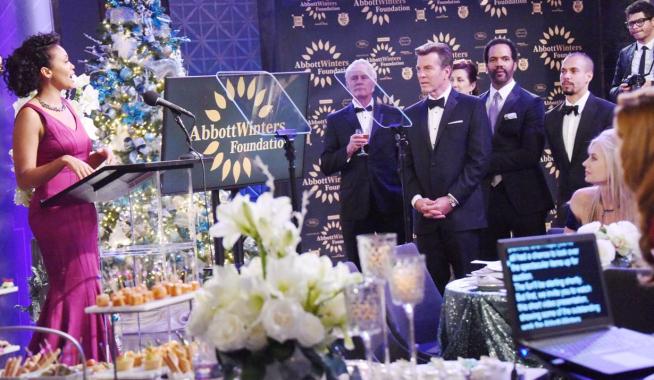