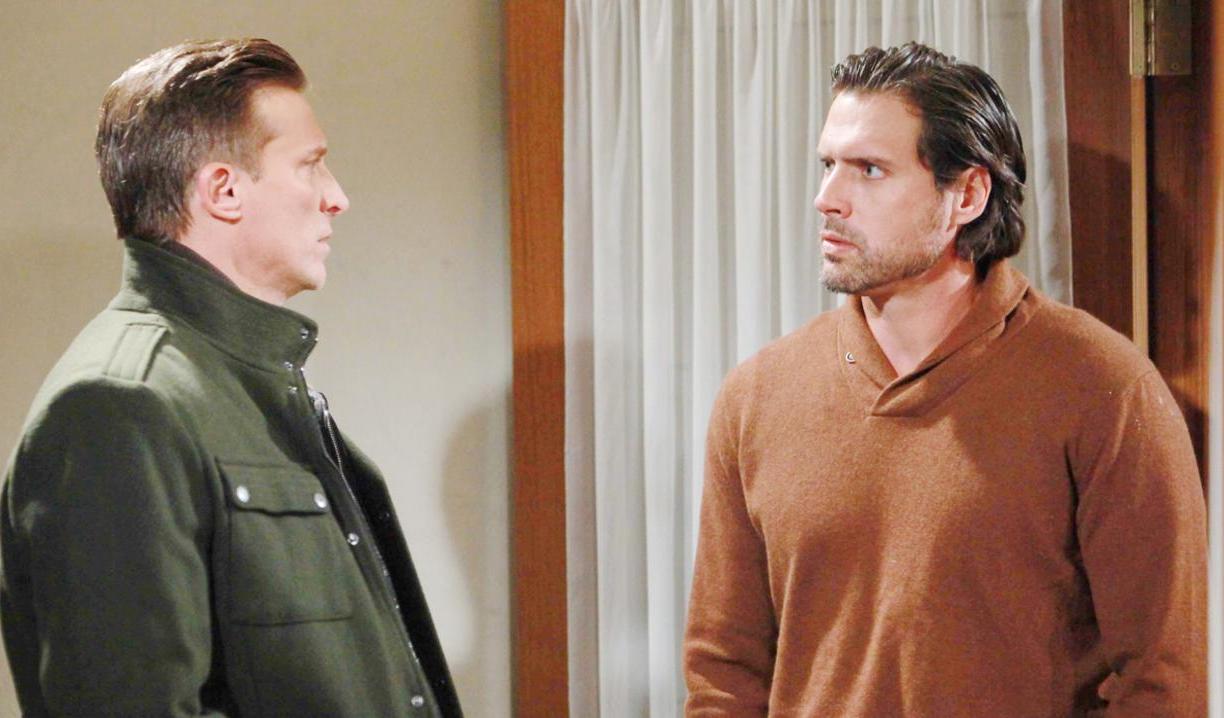 The week kicked off with a bunch of arguing…Sharon/Dylan, Kevin/Chloe, Sharon/Chelsea, Hilary/Devon etc., but things improved with the heartwarming story surrounding JJ, the woman in Crimson Lights, the lighter fare such as the Abbott cabin deep-fried turkey fiasco, and of course the Thanksgiving surprises that unfolded at the Newman ranch. Thoughts:

Leap of faith.
There was more angst over Travis’ cheating and ensuing proposal this week. Meh. It’s just a matter of how long they let Victoria go on being in the dark about the whole truth. When it comes out, she will absolutely drop him, and he’ll likely lose his job. It’s hard to see another outcome, so the heart has kind of gone out of their scenes for me.

Keep fooling yourself.
The scenes involving Nick and Chelsea discussing their kids ad nauseum were relatively tedious, and as with Sharon confronting Chelsea about ‘wanting Nick’, it all seems a little too transparently geared toward promoting the potential pairing. Many prefer to feel the attraction and root for things to head that direction organically, than have it ‘forced’ via the writing. That said, some are seeing a bit of a spark between them, but is it enough? Hmm.

Dishing out.
Feeding the homeless at Crimson Lights made for a load of interesting scenes as Phyllis and Billy reconnected (causing a fresh outpouring of Philly love from their fans), and Esther announced she was the boss and made Jill wear a hairnet, hehe!

Absolutely loved Esther @KATELINDER telling Jill @JessWaltonYR what to do at the coffee house. Jill & the broom was hilarious, Love them #YR

Phyllis also squabbled with Abby (who shouldn’t be calling people out for cheating, just saying), Hilary, and Jill, and Hilary tried unsuccessfully to piece together a juicy tidbit on Billy/Phyllis for GC Buzz. As noted in the last Deconstructing “Y&R,” the GC Buzz situation is getting repetitive, what with Devon constantly having to keep Hilary in line, her pushing the envelope, and Mariah getting stuck in between. This week’s developments really just added to the puzzle as Hilary continued to bluster on the surface, but exhibited a big heart underneath by sending money and a message of hope to the homeless woman. The question still remains as to why they write her as being rude so often for no apparent reason. Many fans are frustrated.

Knee plea.
Neil and Moses joined Lily, Cane, and the twins for Thanksgiving and the takeaway was that Cane’s recovery wasn’t progressing quickly enough for him. Chances are he’ll develop an addiction to the painkillers, which he will take constantly so that he can mask the pain and get back to work. The addiction will test his marriage, and then he’ll have to go to Abbott-Winters Foundation to kick the habit. Neil to the rescue? Just a guess…

Related: Find out what Y&R’s Chloe Mitchell has to be thankful for

It’s a turkey.
The Abbott cabin turkey fiasco was cute. Abby is very funny sometimes, and the bit about Jack eating Victor’s apple crumble – revenge is best served a la mode – was corny but also a nice bit of comic relief. The lighthearted stuff was quite a contrast to the turn in mood when Billy showed up. While it seemed like he and Jack almost got along at one point, things deteriorated when Phyllis’ name came up. As Jack went and met up with Phyllis later, all signs continued to point to a Phack reunion.

Spats.
Sharon went another round with Nikki before getting into it with Dylan over at the penthouse when he found out she’d been talking to Michael about suing Nick. It was an awkward airing of the dirty laundry moment for sure! It was amazing to see Lauren, Michael, Paul, and Christine included in a gathering, but super odd that Chelsea didn’t tell Chloe until she was leaving that she was having dinner elsewhere. Huh?

Newman Thanksgiving.
It was no surprise that Victor reassured Faith she was doing the right thing by moving in with Nick. Oy. Unexpectedly, however, Victoria decided to accept Travis’ proposal at the dinner table. Wow. Okay, but then who saw the Dylan shocker coming? He strode in and informed Nick he would sue him for custody. Ulp. Chelsea’s prediction of things turning ugly may come true.