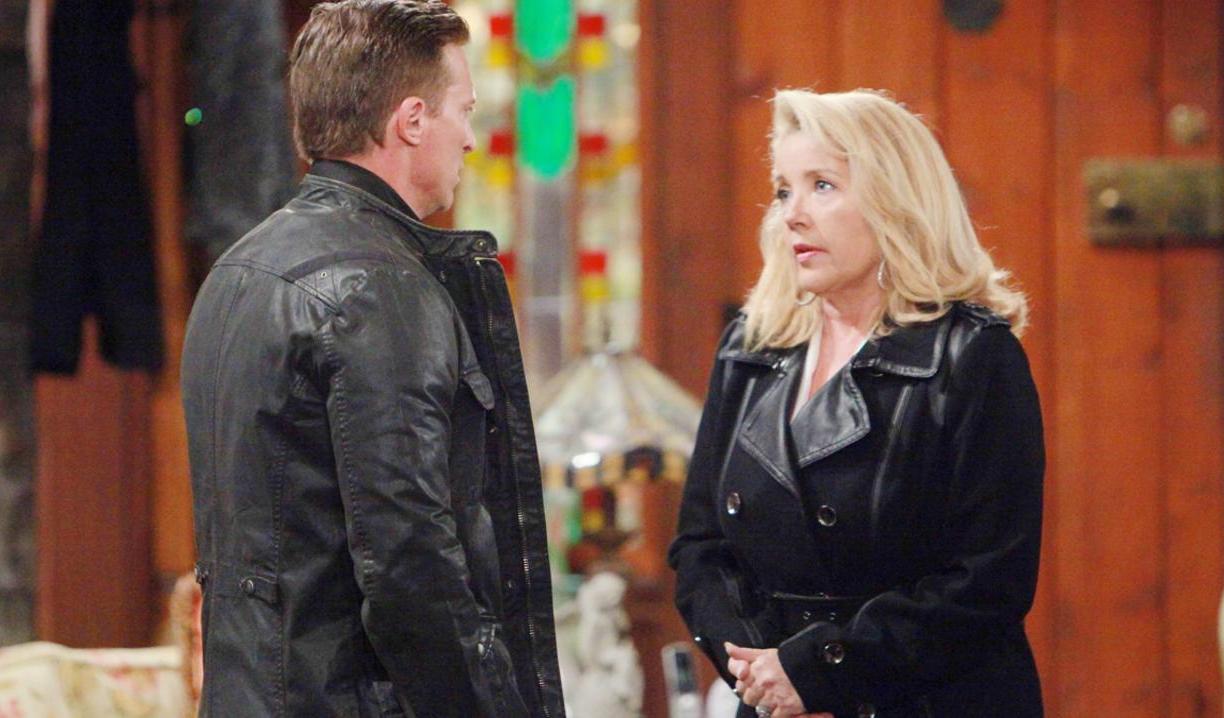 As November Sweeps rolled out, the highlights were found in unexpected places such as Dylan’s grief and Noah’s verbal smackdown on Victor, as well as in the expected, such as Nikki and Sharon’s classic catfight scene. Most disappointing, however, has been the choice to continually push tired former couples back together while having supporting characters parrot that ‘they belong together’. Viewers are not feeling ‘caught up’; they’re bored. The writers desperately need to look at where the ‘magic’ is and go with that instead. Thoughts:

Painful choices.
The fallout in the baby secret storyline continued with Nick removing Christian from Sharon’s place, which was pretty emotional, though it totally threw me for a loop that the writers elected to have Sharon not even hold the boy before he left. I thought that was totally unrealistic. Sharon should not only have held him, but had the boy pried from her arms, followed up with some hysterical clinging to Nick’s ankles as he walked out. There was clearly a choice made to focus on Dylan’s pain and that, conversely, was as realistic as it gets. Steve Burton, who is set to exit Y&R, gave outstanding performances as the grief-stricken Dylan. In the moments after Nick left with Christian, and Dylan stood, bereft, at the window, his crying was real, his facial expression was heart-breaking. All week, Dylan drifted around town in a daze on the verge of tears; understated but powerful. Case in point, when he broke up the epic catfight between Nikki and Sharon (loved this!); Nikki could tell just by the tone of his voice and his expression not to push it, and left. Meanwhile, Chelsea checked in with Victor again re: the moral dilemma of keeping yet another secret from Nick, and the final decree was that it was the right thing to do, and what Adam would have wanted. I would have liked to see Chelsea make up her own mind and then inform Victor, but it is what it is.

Not keeping quiet.
Over at Nick’s place, a parade of Newmans came through to see Christian, get up to speed on the situation, and rant about Sharon. Except Noah, of course, who they dusted off and brought back this week to defend his mother. How fun was it when Noah came at Victor, asking where he got off bad-mouthing Sharon after all the lies and manipulations he’d rolled out over the years in the name of protecting his family? Boom!

What’s the scoop?
GC Buzz got the details on the baby drama after Hilary made a visit to Patty. Some weren’t keen on her duping poor Pattycakes, but what’s really had people talking is Hilary’s demeanor. Why is she so angry all the time…again? She has undergone so many personality changes since coming to Genoa City that people still do not feel they understand/know her after all this time. Anyway, Devon called his wife out for being unnecessarily rude to Mariah, who had uncharacteristically been taking what Hilary was dishing out, and although Devon had been exasperated with his wife on a regular basis, he explained that he loves that she doesn’t back down from people like Victor. Viewers weighed in as Hilary broke Sharon’s story on GC Buzz:

@YRInsider @MishaelMorgan1 Had Sharon not lied amp; kept Sully for months there would be no scoop! Hilary is just doing her job ? #YR

@YandR_CBS Can't stand Hilary. Devon is 2 good a man too have that ruthless witch of a woman. She is beautiful. Y she gotta be so mean ?#YR

Tension and temptation.
In Genoa City business world happenings, workaholic Cane had to have knee surgery (not exactly riveting material, writers), Billy baited Victoria about Travis, and Ashley rolled out a new app for Jabot before running into her old friend, Michelle, who is the woman Travis had an affair with. Naturally, Travis ran into his former lover immediately after declaring to Victoria that he wouldn’t live in the shadow of another man (Victor or Billy) and stormed away from her. He was on his best behavior with Michelle, but after a round of shots and another spat with Victoria, found himself at the door of her suite looking at her in a towel. Uh oh. For the record, I’d be sick of Billy always hanging around too, if I were Travis. Meanwhile, as mentioned in last week’s Deconstructing “Y&R,” Jack’s revenge plot fizzled, and his next plan, to ship Phyllis off to New York, didn’t fare any better.

Friday notes.
Ashley is on fire in any scene she’s in, and it’s getting to the point of criminal that she hasn’t been given her own storyline… Summer arriving in Phyllis’ office with that sad sack look, sulky voice, and dark cloud over her head made many cringe. Her later conversation with Noah about their mothers was only slightly less annoying… For the love of all that is soapy, please stop trying to force Jack into sexy scenes that don’t work for his character. He doesn’t ooze power and virility, and his new attitude is more ‘grumpy old man’ than edgy bad boy. The scenes that ended in him pulling Phyllis into a kiss were uncomfortable, not swoony; a low point on which to end the week.