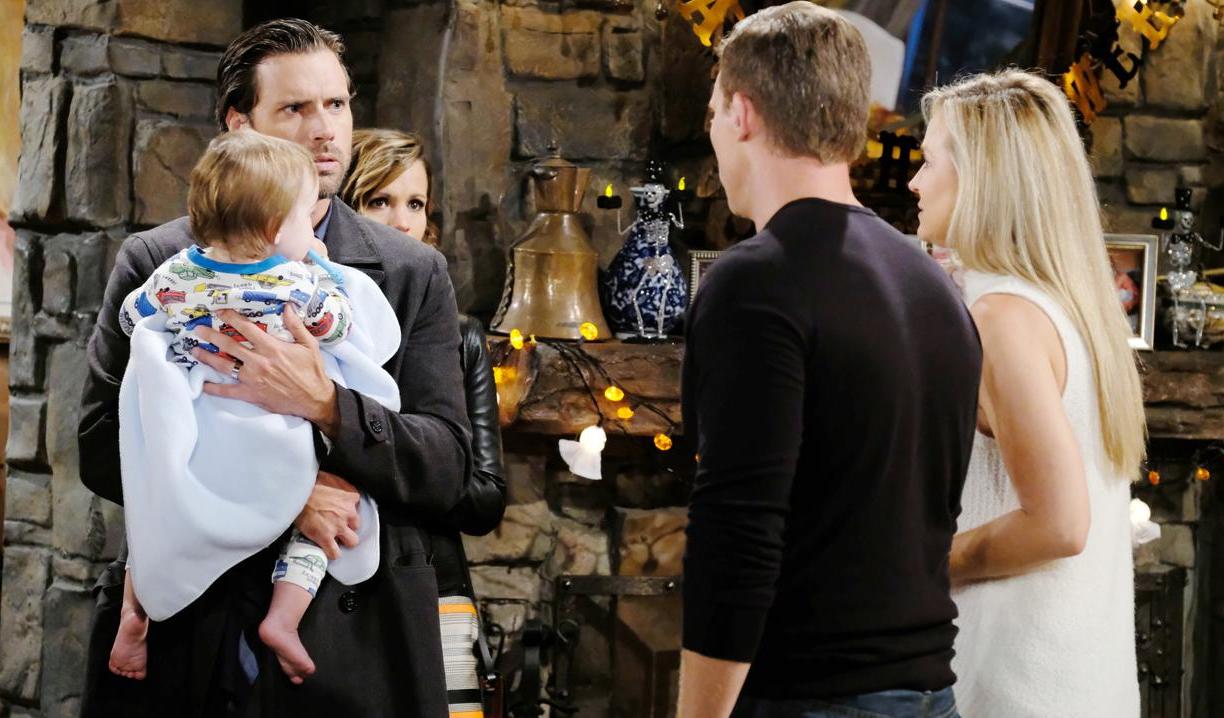 While the mess surrounding Jack’s big revenge scheme continued to play out, Abby and Stitch finally called it quits, and there was some comic relief in Billy getting Natalie drunk enough to dish dirt about the goings-on at Newman, the focus was on Sharon’s long-protected secret coming to light at last, and the emotional reactions and fallout. Thoughts:

Retaliation frustration.
Honestly, if I weren’t recapping the show, I’d be fast-forwarding through this dreadful Phyllis ‘standing by her man’ crap. Jack has gone off half-cocked, as usual, on an ill-conceived, too little, too late quest for revenge that has him looking like a boob while Phyllis tries to ‘save him from himself’, Victor screws him, effortlessly and chuckling, for the millionth time, and even Billy figures out that Jack’s being set-up. Frankly, Billy is the only one showing any real love or concern for Phyllis right now, and the fact that the writing isn’t allowing her to feel even a tug of the heartstrings toward him is repeatedly a letdown. Here’s hoping that Phyllis’ obsession to reunite with Jack, and put walls up with Billy, is a result of extreme guilt, and that something will happen to snap her out of it sooner rather than later. As for Jack, it’s disheartening that they built up the ‘old Jack is back’ angle, only to have it play out so piteously. Consider this:

Jack forgot he put Jill on notice 2 months ago. Jack's revenge on Jill coming in 2025 #YR

A bad day.
I just had to laugh at Abby being lauded as the super sleuth who uncovered the mole for Victor, while Travis ended up demoted, basically for being thorough. Travis then went home and got an ‘I told you so’ from Victoria, and also had to deal with Billy beating him at the Halloween game by a bear mask. At least the kids like him. Anyway, it appears that stumbling blocks are being set in place for Victoria and Travis, with more ahead, presumably, as Travis’ ex, Michelle, is on her way to Genoa City. If Victoria and Travis don’t make it, Abby’s now available and has a penchant for men who have already slept with her family members. Hmm.

Finally!
As noted in the last Deconstructing “Y&R,” Sharon’s secret coming out was hugely anticipated if for no other reason than to get past it. The bomb was finally dropped when Patty called up Nick to reveal that Christian was alive and being raised by none other than Sharon. Kind of delicious! Nick thought Patty was delusional, and was stunned when he went over to commiserate with Sharon only to hear her confess it was true. Given the enormity of the revelation, the ensuing scenes between Nick and Sharon felt weirdly understated – he raged more when he was smashing things at The Underground prior to finding out. The next step was for Dylan to learn the truth. Dylan’s emotions are always more subtle, so when he shouted in Sharon’s face it was a powerful moment indeed. Mariah arrived at one point, quickly realized the secret was out, and viewers felt every cell in her body vibrating with panic and horror. So good! Dylan continued to move viewers immensely in scenes with the baby, Sharon, and Nick, who doubled-back, full of outrage and indignation, for another confrontation. By the time Chelsea showed up to talk Nick down (bleh), we had been on a roller coaster of emotions with Sharon, Dylan, and Nick, and had seen and felt their shock, desperation, and ultimately, their devastated exhaustion – a brilliant job by all. Meanwhile, Chelsea kept the secret that Adam is actually the father of the baby (after consultation with Victor so he can share the blame later), which many thought could have diffused the situation. Fans were taking sides all over the place as the drama played out:

@JoshuaMorrowYR @1SteveBurton @sharonlcase I am so torn up w/this drama today??? FANTASTIC GREAT performance this afternoon by all??? #YR

Before tonight, and after tonight.
After leaving Sharon’s house, Mariah ended up having an intense encounter with Paul, who was fresh off a visit at Rivercrest, during which Patty had cryptically warned him his son would need him. Mariah concealed her own hysteria and handled Paul without blurting everything out, which was admirable, and refreshing. Kevin arrived, and quickly forgot his own issues (Chloe turned him down for moving in together, though she promised more sex) when he saw Mariah was so rattled. Mariah kept the secret from him too, though she broke down about possibly being in a lot of trouble. I couldn’t help but feel for her. Meanwhile, Chloe ran into Billy, who is possibly/presumably her baby daddy. While some see possibilities there, I’m not feeling it, and notably, the writing still isn’t making me give a hoot who Bella’s father is, really.

Friday notes.
Despite Phyllis’ warning that someone could be tailing Jack, they met in broad daylight and he hung around GC Buzz trying to get the documents back. Kind of obvious, just saying. And why do they keep trying to make Jack and Phyllis ‘sexy’? The blouse-ripping scene was just awkward… Boy, they sure want us to dislike Hilary for some reason. She was barking orders at Mariah like a real witch, and then stole her idea? Why?! Meanwhile, the writers still don’t know what to do with Lily and Cane. They’re trying to show them struggling with life/work balance I suppose, but there needs to be more substance to the storyline. At work, Cane compared notes with Billy, who is suddenly missing the family life, and Victoria defended him to Travis, so the predictable writing is on the wall there. Also, anvils kept dropping that Bella is Billy’s, so expect that news to disrupt any reunion with Victoria. Meh.