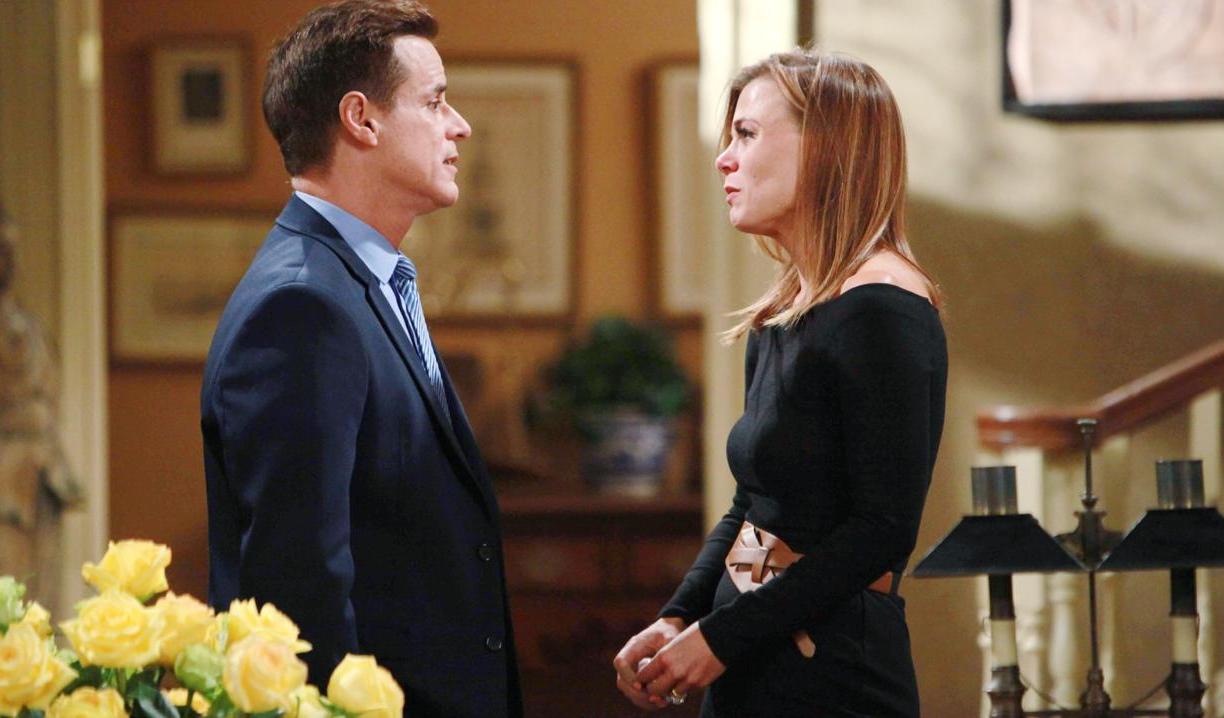 Clearly some work has been done to try and ‘right’ certain characters who had been altered to suit plots, and while this is definitely what fans have been asking for, it still might take a bit to get our bearings. Last week, the old Jack came back, and now Summer, who has been horribly unsupportive toward her mother for eons, is suddenly Phyllis’ biggest champion after one conversation with Nick. Hilary, who went from cold and calculating, to soft and in love, to a frosty, power-hungry social climber, is now back to being a devoted wife and a crusader for justice through GC Buzz. Phyllis nearly caused the end of Michael’s law career, but now they’re besties again and Lauren is sending her well wishes in the hospital. Okay…just a bit of whiplash…give us a minute to adjust. Thoughts:

Jack on the attack.
I was all over the place on the Jack post-affair reveal stuff this week – totally rolled my eyes at Paul giving Phyllis a domestic abuse hotline card, loved seeing Ghost John, but thought it might have been a tad too soon to drop in and talk about forgiveness. Jack clearly thought so too. The rest depends on each viewer’s perspective. If you’re not thrilled at the idea of the dynamic Phyllis being all about Jack and their boring marriage for the rest of her soap life, then her current one-track mind about winning him back is fairly unappealing. Some were upset with Billy adding insult to injury by being angry and accusing toward Jack after Phyllis fell. Karma then zinged him when Phyllis announced she was fixated on getting her husband back. This seemed to suck the life out of the guy, who then told Jack he was removing himself from the equation, aka, wouldn’t keep pursuing her. For the romantics out there, he loved her enough to let her go. For others, he wasn’t in the equation anymore anyway. Another case of whiplash – Phyllis spent months telling Billy she was in love with him, only to decide in a day it was never about him.

He likes him.
Victoria and Travis moved in together ‘officially’ and were adorable as they hammed it up in the bathroom. Travis keeping her father waiting while they took a steamy shower together was nothing short of delicious. Then he turned down Victor’s job offer and we loved it, and so did Victor apparently! It wasn’t to be that simple, however, as Victor didn’t let the matter drop and, hilariously, was like the proverbial cat that got the canary when Travis agreed to come and work with him. What? Nikki wonders what Victor’s up to, Victoria wonders what Travis is up to, and we wonder all of that too. Fun! As for Jill, after her sibling squabble with Lauren, she seemed to finally realize that maybe matchmaking for Billy and Victoria wasn’t the best idea. Cue Billy deciding he wants back in and seeking Jill’s help. It could happen… As for Cane, it was another week of him hanging on the fringes of this storyline; teasing Jill, needling Billy about Travis, and oh yes, turning down a model that hit on him.

Gossip with a conscience.
Last week’s column expressed hope that there would be fresh stories for the Winters family, and lo and behold we got one with Devon making a power move and snatching up GC Buzz. Though it was silly to have him try to bribe a tabloid reporter while the cameras were rolling to begin with, it was all uphill after that: Hilary and Jill nearly coming to blows, Devon revealing that he’d purchased the TV show and firing the mouthy reporter, Lily expressing her suspicions of Hilary’s motives, the debut of the ‘new’ GC Buzz…and this has lots of potential moving forward. Now this:

Love Lily…but she desperately needs a story other than going after Hilary….#YR

Mariah’s fed up.
Chloe and Kevin are getting back together and we don’t like it anymore than Mariah does. As much as I’d like to see her get into an entirely different storyline, the idea of Mariah teaming up with Dylan and exposing Chloe’s secrets is appealing for now. As for Faith disappearing on Mariah because she needed an emergency dress…are you kidding?

Damn, Faith ran off and made Mariah sick with worry but still gets an ice cream cone. That is not what I would have gotten. #YR

Too soon?
So, Adam’s been dead all of a few weeks and characters are having conversations about Chelsea and Nick having an attraction? Not only were fans not buying Sharon pushing Nick toward another woman, but there was a lot of talk on social media about a Nick and Chelsea pairing being ‘forced’ and ‘chemistry-free’. Yike.

@SharonCaseFan @18christopher they are rushing Chick, and the question is why. Chelsea has barely grieved, and so far they are boring #YR

Anticipation.
It looks like Sharon’s baby secret might finally be coming out into the open! First, Dylan noticed the hang-up calls, and then Patty gifted Faith with a baby doll and followed up with a deliciously chilling phone call. Loved it!

Friday notes.
Billy laughing his way out of the Club after learning Travis had accepted a job with Victor reminded us why we love him… Travis taking Victoria back to Hank’s Bar and saying/doing all the right things to reassure her had viewers weak in the knees. He almost seems too good to be true… Jack stashing Phyllis in a tiny, windowless office was funny, but also felt like a metaphor for their relationship – just let Phyllis out of the box already!