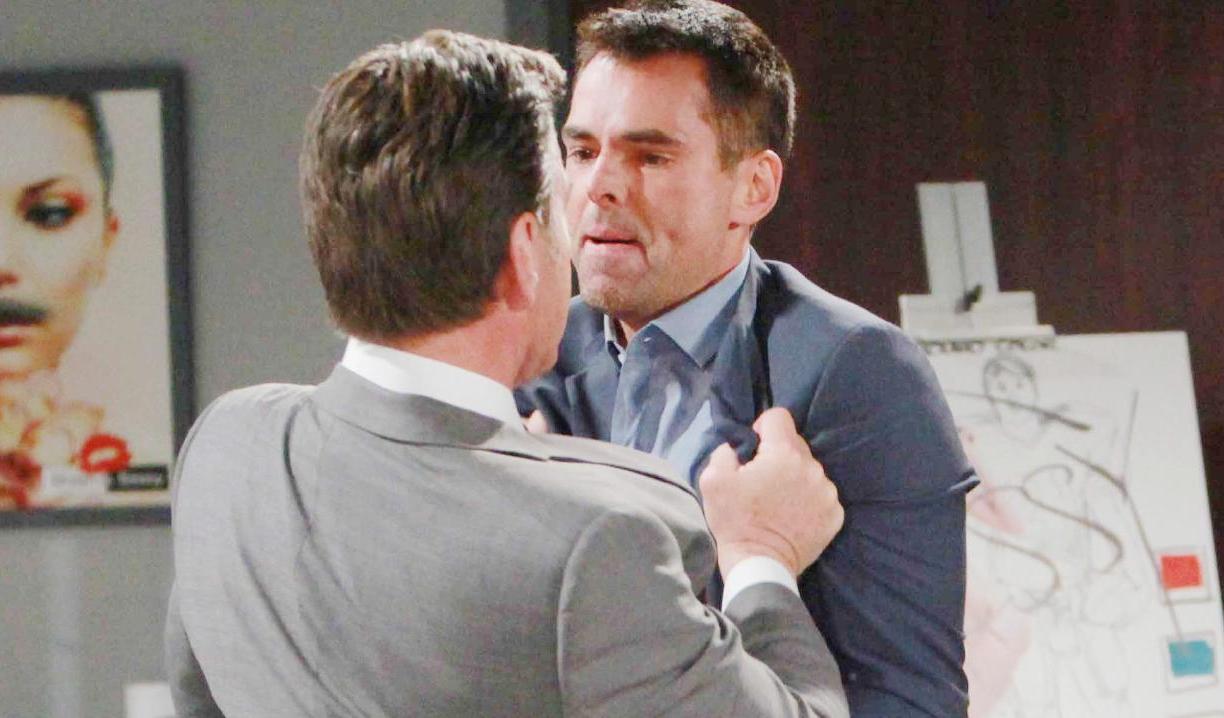 The big focus this week was on the reveal of Phyllis and Billy’s affair, and while not everyone was a fan of the way the writers had Jack find out, all agreed the acting was exceptional. Thoughts:

Wanna talk about me.
The week kicked off with the powerful scenes surrounding Jill, Colin, and Billy, which were in sharp contrast to the deadly dull Stitch and Abby relationship dialogue, and a down-in-the-dumps Summer dragging around town post-Luca. Bleh. Summer’s conversation with Phyllis in the park later was more compelling, though Summer’s stance regarding her mother’s ordeal at the hands of Marco (and Victor) was especially alienating for fans, so the mother/daughter dynamic isn’t plausible for some.

Paranoia go round.
As mentioned before, and as Mariah so aptly pointed out, Sharon is creating her own drama based on paranoia at this stage of the ‘secret’ game, and it’s truly exhausting. While the impact of the reveal would be blunted somewhat with Adam gone (given that he’s Christian’s biological father), it still needs to come out, and soon.

Grief and guilt.
Chelsea was snapping at everyone as she faced life without Adam, but Victor’s gesture of handing her back his shares in her company, seemed to take the edge off. This also made Dylan even more suspicious that Victor was trying to ease his guilty conscience, and more determined to expose him. It proved to be a bumpy road with Paul getting in the way, and even apologizing to Victor on Dylan’s behalf (ack!), and Nikki putting Dylan on notice that if he brings Victor down, she and Chelsea will go down with him. Quite a dilemma for Mr. Do Right! As for Nick, many were having a giggle over him being hyper-focused on Chelsea since making his promise to Adam, and contemplating how long it will take before he starts to comfort the grieving widow in a more physical way. Hehe.

Big soapy mess.
Getting back to the Jill and Colin stuff…Jill’s acid reflux and Colin facing down Jack’s cold hard cash provided some moments of comic relief leading into the heavy drama of the Phyllis and Billy affair reveal. I’m not sure I enjoyed Jack finding out about the affair in bits and pieces. While it made for several confrontations it also dimmed the impact…a huge shocking moment might have been preferable. Some of what happened was also a stretch…especially Ashley blurting out to Jack that Billy was in love with Phyllis – it made no sense for such a strong, together character to suddenly lose her composure or act like a basket case wanting to ‘get away’ from Jack. In any case, this led to the explosive confrontation between Jack and Billy, which was deliciously intense, but worryingly featured Billy whining that he was never a contender. The party line this week seemed to turn to ‘Billy loves Phyllis, but Phyllis was just reacting to the Marco situation’…an unappealing development as it could signal that the writers are still pushing the idea of Jack as Phyllis’ great love, when history dictates that he was always a port in a storm for the redhead during her more tumultuous times, but she never loved him as much as he loved her. If this is all the start of rebuilding Phyllis and Jack…not interested. That said, Phyllis’ inner battle as she unloaded on the therapist was incredibly riveting and brilliantly acted, while back at Jabot, Billy went looking for her, giving us one of the best lines of the week:

Anyway, people weren’t keen on tipsy Billy blaming Ashley, even if he was in pain. Jack getting up in Phyllis’ face demanding the truth was also intense, and if nothing else she admitted she had fallen in love with Billy. Things got oddly anti-climatic from thereon in as Phyllis hightailed it over to see Billy and inadvertently let Victoria in on the affair reveal, and Jack decided to go give an interview but ended up airing his dirty laundry to the reporter. Yike. One good thing that could come of all this is the possibility of Jack regaining his revenge mojo, which has been sadly MIA for far too long.

Friday notes.
I continued to love Travis’ matter of fact way of dealing with things… also got a giggle at Cane planning to try and convince Jill to let him run the company. Admirable ambition, but if anyone should run it alone, it should be Victoria.