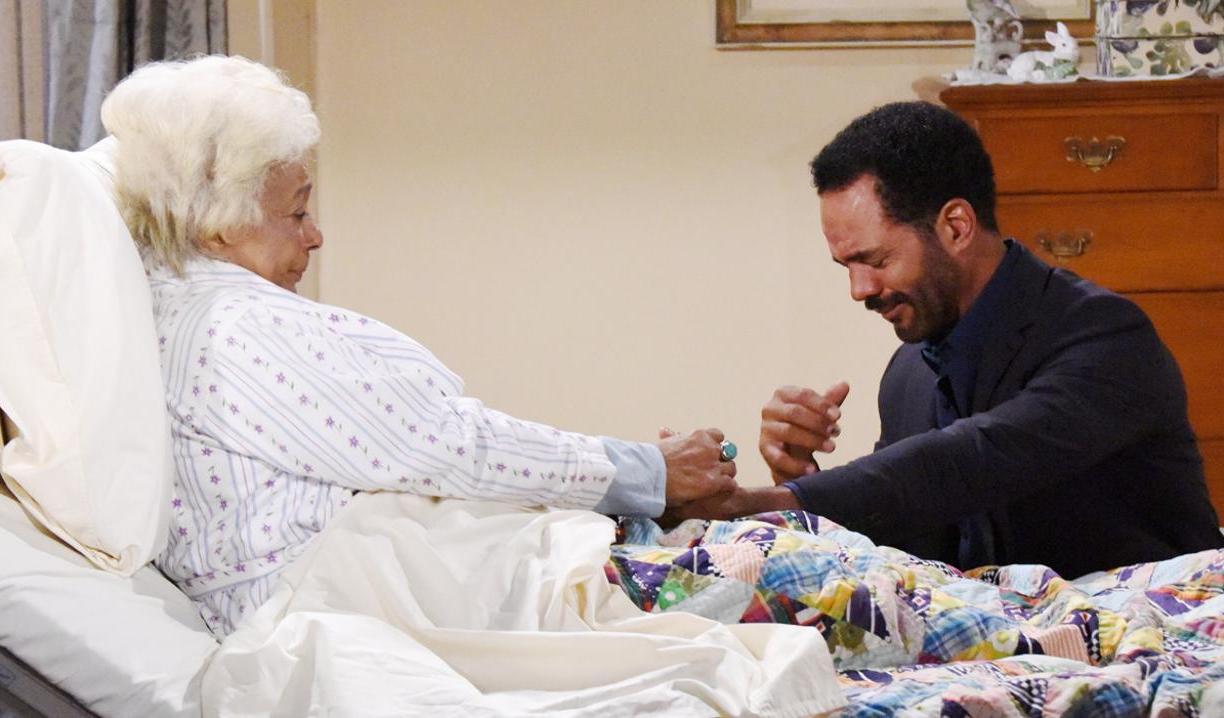 The highlights of the much anticipated 11,000th episode week, for me, had little to do with the big blockbuster explosion in the Adam storyline. Instead, they were in the clips of Y&R actors sharing memories aired before each show, and found in character-based moments such as the instantaneous connection between Mariah and Daniel, the entertaining scenes and developments with Travis/Victoria/Billy/Phyllis, and the unexpectedly moving encounter between Neil and his mother. Thoughts:

Bring him back!
The instant chemistry between Daniel and Mariah was kind of amazing. Add to that his complicated history with her dead twin sister and friendship with Kevin, and it could be the making of something incredible…if Daniel were brought back on canvas. Even Camryn Grimes weighed in on the Daniel/Mariah connection:

As for Daniel’s scenes with Kevin, their banter is always entertaining, but talking about Kevin and Chloe’s one-sided relationship, not so much.

Fun developments.
Travis is back for good and dealt with Billy head on – love how direct and unflinching Travis can be. Phyllis finally told Billy that Jill knows about them, so it will be interesting to see what he cooks up to deal with his mother. Oh, and you know it’s going to get even more tangled up what with Colin determined to get involved!

The Summer curse?
So, it was like they were trying to give Jack his groove back with the Luca stand-off and him confronting the Newmans at the ranch, but there was a lot of bluster with not much follow through – he skedaddled right out the door after Nikki laid into him. Getting back to the stand-off, Luca remained an enigma right up until he was arrested…seemed to actually feel love for Summer, but just couldn’t change his snakelike ways, or at least it was too little, too late. Luca had grown in popularity with viewers due to his charm, complex nature, and potential (many wanted to see him paired with Victoria, or see his family go to war with the Newmans), so it was frustrating to see the turns taken with his character that led us to here. Few felt for Summer, who was back to her ‘poor me’ routine. Sigh.

Escape drama.
I had a certain appreciation for the new ‘if you can’t beat ‘em, join ‘em’ twist with Nikki helping Victor in his plan to set up a new life for Adam, Chelsea, and Connor. It might have been more typical for her to walk out on him again after learning he’d framed his son for murder, but that would have been tiresome at this point. Though the Chelsea/Adam scenes at the cabin were heartwarming (and silly…Adam grew up in rural Kansas and never used a fishing rod?), they were bittersweet given that we knew something was going to happen. Most viewers by then were aware of Justin Hartley taking a break from Y&R, so that could explain why we felt no real element of surprise when Connor got sick, Chelsea had to leave with him, Adam was ambushed by Chloe, and then the cabin exploded just as Chelsea returned. Maybe we’ve become a little cynical, but it kind of felt ‘been there, done that’ when we were expecting something more, or something different at least. Chloe’s intensity in her scenes with Adam was gripping but it was a disappointing turn for Chloe’s character (unless you love her crazy and dark), and on the surface it didn’t even make sense for her to have shown up there:

Did Chloe just have a tranquilizer dart lying around? And a GPS on Chelsea's car? #yr

Apparently she also had the amazing forethought, and opportunity, to put a tracking device in Connor’s stuffed dinosaur, hehe.

Stole the show.
There are valid concerns out there about the storyline with Neil’s past being pulled out of someone’s behind when it should have been given time to to build, but regardless, the scenes between Kristoff St. John and Nichelle Nichols as Neil’s estranged mother Lucinda were brilliant. I’m not talking about the actual material – oh, look, she’s an alcoholic too – but the raw emotion in their performances. They made me believe it and feel it.

Nod to the Bells.
“Y&R” co-creator Lee Phillip Bell’s cameo (she paid for Christine and Paul’s bill because they reminded her of her and her late husband), was so sweet, and a little sad.

Friday notes.
Much has been said about the improved production values under Mal Young, and it was certainly evident in the outdoor nighttime scenes following the explosion, and in the new ambiance at the ranch. Loved the scenes with Victor verbally sparring with Travis, and with Billy baiting Phyllis during the Abbott dinner as she tried desperately to change the subject. “Oh look, they have the short ribs!” Hehe. Serious intense chemistry, and extreme tension as Jack was nearby. Though it was offensive for that to be happening under his nose, it served to illustrate Billy’s growing desperation for the relationship to be outed at any cost. P.S. Please, give Ashley a life of her own.

Daniel returns to a parallel...