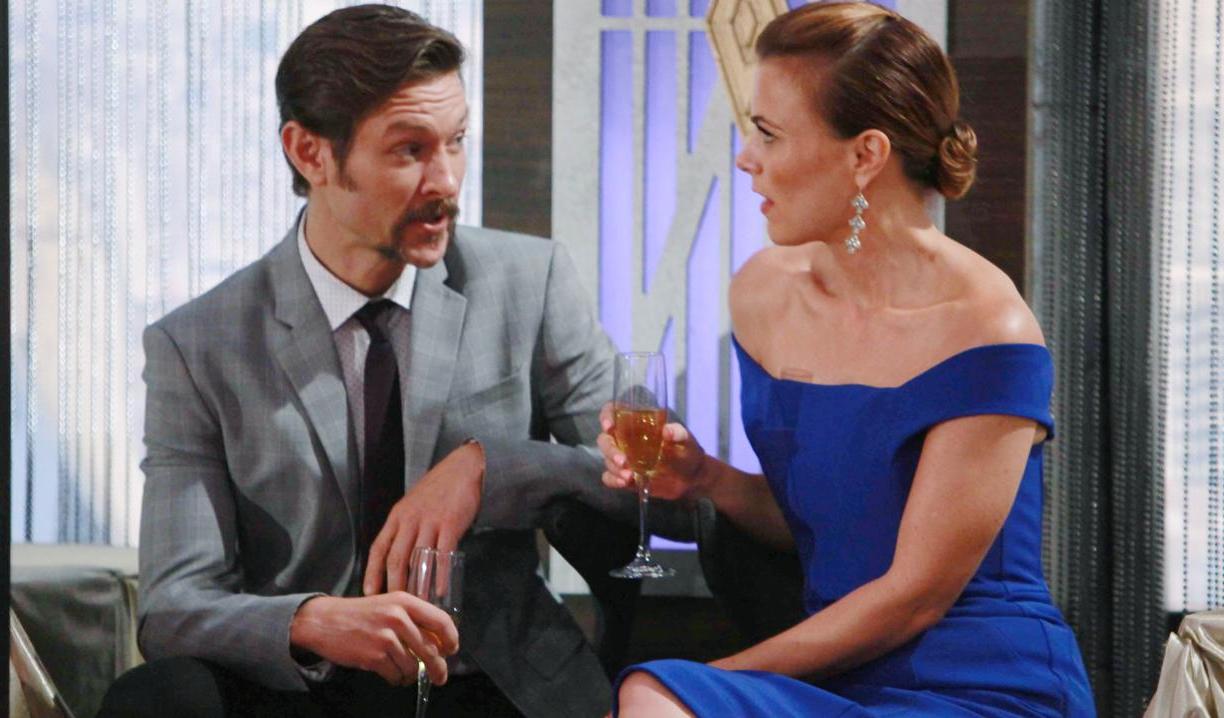 At least Jill was snarky, Chloe was two-faced, Noah was a hothead, and Travis showed up to force a confrontation with Luca, because everyone else on “Y&R” was being entirely too civil this week. In fact, it felt like another universe at times… Thoughts:

Come sail away.
The week kicked off with Travis and Victoria still on the boat and then reluctantly parting ways. This pairing just has that special ‘something’; onscreen magic… Hopefully the writers recognize this and plan to make the most of it. Sadly, it’s difficult to feel optimistic in that regard considering their track record of favoring boring, forced matches over couples that share this sort of natural chemistry. In related notes, Phyllis’ wedding fantasy, and the Billy/Victoria candid conversation at the Father Knows Best house were hits earlier in the week.

Spotlight on… The unexpected hook-ups of Sharon and Victor, and Phyllis and Billy

Another world.
At some point, Genoa City entered the Twilight Zone…a parallel universe in which Adam’s transformation into an entirely different character was complete. The cunning and cutthroat Adam was unwise enough to compromise himself by going on a hunger strike, pled guilty in court against advice, and then bonded with Nick, the brother he could barely tolerate previously, to the point where he entrusted the raising of his son to him. Many thought it unbelievable that Adam didn’t ask Jack to look out for Connor, but remember it’s the Twilight Zone where Jack no longer has the stomach for conflict or dealing with Victor. In this universe, Victoria and Abby wrung their hands over their poor brother Adam’s terrible circumstances, and Nikki commiserated with Victor over his little error in judgment in framing his own son for murder. Even Phyllis backed off from her mission to expose Luca after a setback.

That said, the scenes between Adam and Nick in the prison visiting room were intensely emotional. It seemed obvious the groundwork was being laid for Nick and Chelsea to hook-up, which could then set the stage for Sharon’s baby secret to come to light, given that it would instantly place Chelsea into a moral dilemma as to whether or not to divulge to Nick that Christian is actually Adam’s child. I worry that seems too predictable, and that a Nick/Chelsea pairing might be as exciting as watching paint dry. Though if they share some sexual heat and have storylines outside of the penthouse it could work.

Come clean or go home.
Chloe partaking of Chelsea’s hospitality (penthouse, job), while knowing she’s responsible for her misery, then sitting in the park telling Kevin that she hopes Adam stays locked up, and later comforting Chelsea after he’s sentenced to ten years? Not a good look for Chloe. Just saying.

Return of the rascal.
Loved how Colin’s return made not only for a funny scene at Brash & Sassy with the ‘prudes’ Cane and Billy cringing, but also finally revealed there’s another reason Jill returned besides meddling in Billy’s love life.

Back in time.
The Winters family was back in the spotlight as it was revealed Hilary, surprise, surprise, had letters from Neil’s estranged mother. So random. It’s also strange that in all of these years no one ever pressed Neil on the topic of his parents before! Knowing Lily when she gets onto something, it’s safe to say we’ll be seeing Neil come face-to-face with his mother and confronting his past demons before long.

Unexpected arrivals.
I love a good soap gathering, and the engagement party was no exception, even if it did revolve around Summer. Noah showed up, notably without Marisa, and made a lot of racket about Luca being a jerk before retreating to the bar to knock back drinks and glare. Fun! I kind of hoped he’d get drunk and make another scene. I wasn’t the only one:

Also, Daniel had strode in to surprise Summer, and later Phyllis, sporting an impressive mustache from a bygone era that the writers made the wise choice not to ignore (the actor had it for another role he’s filming). Jokes were made, hugs were given, and then the Newmans arrived fresh from Adam’s sentencing. Dylan popped by to try and intimidate Victor (ack), and Nick got his dig in by not shaking Luca’s hand. Everyone eye-rolled through Luca’s little speech, and then the room hushed when Travis appeared. He came through! Travis exposed Luca, but Summer ran off with her crooked fiance denouncing them all, and later was dumb enough to confront him on her own. Oy. Loved the Phyllis/Daniel interaction at the party, and was intrigued by Daniel’s shock upon encountering Mariah, due to his history with her late twin, Cassie. So good. We all wish we could keep Daniel:

I am here for Daniel. #YR

After party.
Travis told Victoria he didn’t want a fantasy, he wanted something real with her… Swoon.

On the run?
Victor pulled off the near-impossible again by having Adam, ahem, removed from the van taking him to prison. Meanwhile, Dylan Do-Right and the Keystone Kops busted into Chelsea’s place as though they were going to find Adam standing there. Jeeze. Apparently, in our new parallel universe, hell was about to freeze over, because Victor, in a tense emotional scene with Adam – wait for it – owned up to what he’d done and expressed regret. We also found out later that Nikki helped with Victor’s plan, as she delivered a cellphone to Chelsea. Well I’ll be damned…

Philly and Tricky hot topics, but...